JUST IN TIME FOR CHRISTMAS

Nancy Lamott and beauty were on intimate terms. It radiated from her warm personality, resonated in her tender vocals, and suffused the recordings she made before succumbing to cancer in 1995 at age 43. Disc jockey Jonathan Schwartz, described elsewhere in this issue as a friend of and authority on Frank Sinatra, declared Lamott the finest cabaret singer since the Chairman of the Board, praise well earned by Lamott and thoughtfully dispensed by Schwartz. Like Sinatra, Lamott sought out literate songs with a folksy quality-the settings may have been urbane, but the feelings were universal. True to this aesthetic, she invariably recorded in simple settings, with a small combo, and sometimes with only a lone, evocative piano or guitar supporting her velvety voice, which always treated the lyrics as the precious gems they were. The Great American Songbook has rarely had such an effective advocate as Nancy Lamott.

Her lone Christmas album, Just In Time for Christmas, is a crash course in all that was remarkable about this gifted artist. Produced by David Friedman, for whose label Lamott recorded and who, in addition to producing all of Lamott’s recordings, has had a storied career composing for Broadway and film (including many of the latter-day Disney animated classics such as Beauty & The Beast, among many others) and whose own Christmas oratorio, “King Island Christmas,” has become an international seasonal favorite), the album is a quiet, introspective gem.

‘Just in Time for Christmas,’ Nancy Lamott, the title song from her Christmas album

Lamott is teamed with an empathetic quintet comprised of arranger Christopher Marlowe on piano, the incomparable Jay Leonhart on bass, John Redsecker on drums, Ken Sebesky on guitar and Joe Passaro on percussion. The songs represent a mix of fine contemporary pop songwriters (such as Annie Dinerman, who turned her environmental concerns into an irresistibly catchy Christmas wish list in “Earth and Sky,” here featuring Lamott’s breezy vocal, if you will, wafting over a chirping children’s choir from the Fearless Theater Company, with the percolating, percussive arrangement further enlivened by the addition of Mike Migliore’s frisky flute lines) and masters of the form (Frank Loesser, for example, whose “Baby, It’s Cold Outside” pairs Lamott in a delightfully discursive duet with Michael Feinstein as the swinging combo pushes the whole affair forward to a breathless close). For “Just In Time for Christmas,” which he co-wrote with David Zippel, Friedman fashions a big production number, supporting Lamott’s triumphant vocal with aggressive percussion, violins, oboe, French horn and a rousing choir, in a song describing a woman’s joy at opening herself to the gift of new love. These are all wonderful moments, tasteful and exuberant, right and ripe for the season.

But Friedman does his finest service to the singer when he exercises restraint–if anyone knew how powerful Nancy Lamott’s voice could be with little or no atmospheric embroidery, it was David Friedman. So the songs that rivet the attention here tend to be the less-is-more numbers, when the stark beauty of her lyrical investigations is adorned only by the subdued authority of the small combo, or the haunting eloquence of Christopher Marlowe’s solo acoustic piano, as when he sets the stage for her tender exploration of the album opening “Some Children See Him,” serving as both a second, echoing voice to Lamott’s and an atmospheric element adding subtext to the singer’s plaintive reading. The album closes with two powerful but reserved performances: On “A Song for Christmas” the combo eases in gently behind Lamott’s wistful reflections, whereas acoustic guitarist Sebesky provides a cozy, introspective backdrop for Lamott to sign off with a warm, richly textured reading of the enduring classic, “A Christmas Song,” in an open-hearted and heartfelt approach by an instrumentalist and a vocalist in perfect harmony with the lyrics’ benevolent tidings.

‘I’ll Be Home for Christmas,’ Nancy Lamott, from Just In Time For Christmas

However, there is nothing quite like the emotional depth Lamott achieves in her deeply interior approach to “I’ll Be Home for Christmas.” At the moment you think you can’t learn anything new about an old warhorse–albeit a beloved warhorse–of a song, here comes a singer who essentially rewrites it as a torch number, making of its hopeful premise something ambivalent, uncertain, and tinged with melancholy over the prospect of the dearly yearned for reunion growing distant as its time approaches. The reasons why are never made clear, deepening the mystery as to the source of the singer’s malaise. Marlowe plunks out the loneliest notes imaginable, strategically sprinkling them here and there, underscoring the futility of Lamott’s vow. The quiet at the end is heart rending. To reiterate, Nancy Lamott and beauty were on intimate terms. Just In Time For Christmas finds them closer than ever. 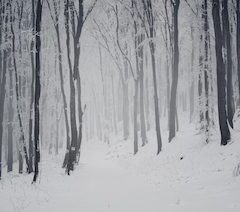