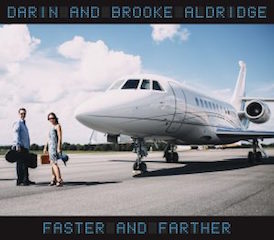 Well, this isn’t something you see on the cover of a bluegrass album very often (maybe never): the artist, or in this case artists, apparently about to board a private jet. Maybe Darin and Brooke Aldridge, two of North Carolina’s finest exports to the bluegrass world, do travel in this style, and more power to them if they prefer leaving on a jet plane. I see the cover mage more as a metaphor for what’s inside: music performed with such a degree of soulful conviction in the vocals and precision but impassioned playing by the band as to propel Darin and Brooke onto an even higher plateau than where they landed with 2015’s acclaimed Snapshots, a #8 Billboard Bluegrass Album Chart entry and a selection to the Deep Roots Elite Half Hundred of 2015 as well.

The album title itself is a phrase from a beautiful bluegrass love song, “Still Falling,” written by Lisa Shaffer and Dennis Duff and performed to sumptuous perfection herein, with a lovely, aching vocal by Brooke guaranteed to tug at the heart, velvety harmony by Carley Arrowood and nuanced instrumental support, with poignant punctuations provided by Tyler Collins on dobro and Shad Cobb on fiddle. One hesitates to say Brooke really comes of age on Faster and Farther because she’s been outstanding on all seven of the duo’s preceding albums. Whether she’s going for broke in the style of Rhonda Vincent on the album opening barnburner “Kingdom Come” (written by New Grass Revival’s Pat Flynn, who sits in on guitar on the track, as does his NGR compadre John Cowan, who’s on electric bass and shadowing Brooke with high, keening, trademark harmony) or vividly plumbing deep wells of enduring heartache and homesickness in “Mountains in Mississippi,” Brooke is on a higher plateau, delivering one virtuoso vocal performance after another, some quite startling, such as her coda to Shad Cobb’s final weeping fiddle solo, when she returns with a kind of afterthought, winsomely rendered, in “Said there’d be a warm breeze/down in Biloxi,” and then stretches “Biloxi” into a high, mountain cry that tails off into silence, as if yet another hope had been dashed.

‘Highway of Heartache, Darin and Brooke Aldridge, from Faster and Further. Written by Carl Jackson and James Rushing. Musicians include Darin on guitar, mandolin and vocals; Tyler Collins on dobro; Shad Cobb on fiddle; Tim Surrett on acoustic bass; and Vince Gill on vocals.

Whereas Snapshots explored themes of faith, family and heritage, Faster and Farther is more about the ways of the heart, a la the abovementioned pair of songs. Brooke carries the vocal load (and lead) on 11 of the 14 tracks (two are bonus cuts), but Darin has a couple of memorable moments deploying his affecting tenor in the lead role: on the John Cowan-Donny Lowery co-write, “This River,” a tender, metaphorical account of the strength of a good woman’s love, and on Carl Jackson’s “Eugene and Diane,” a bittersweet ballad about two seemingly ideal mates, neither of whom ever had the courage to unite and nurture their love for each other, until finally time passed them both by, leaving only what ifs in their wake as their lives took different paths, until “they lived and died regretting the things they never said.” It’s a classic Carl Jackson one-act play-in-song, and the blend of Darin’s measured lead vocal and Brooke’s undercurrent of urgent harmony gives the narrative the hefty emotional wallop the message demands. (He also takes a fine lead on one of the bonus tracks, “How I Want To Be Remembered,” a midtempo, fiddle- and banjo-driven meditation of a man wanting to make amends with those he loves before he leaves this mortal coil, thematically a tune that would also be a nice fit on Snapshots.)

The guests here sweeten the mix. The stunning harmony singing on “Mountains in Mississippi” (a co-write by Lisa Shaffer, Dennis Duff and Jenee Fleenor) is Darin teaming with Vince Gill, who also team to back Brooke with rich, warm vocal support on the Carl Jackson-James Rushing tear-stained gem “Highway of Heartache,” a tune that wouldn’t have been out of place on Highway 101’s classic debut album and on which, at times, Brooke sounds uncannily like the young Paulette Carlson. And there’s a bit of a New Grass Revival reunion going on here, with John Cowan appearing on four tracks, Pat Flynn on guitar on three, with Cowan co-writing two of the songs (one being with the inimitable Darrell Scott on a paean to wanderlust titled “Cumberland Plateau” that further distinguishes itself with a tight, soaring harmonized chorus right out of Rubber Soul-era Beatles) and Flynn having a solo copyright on two numbers himself.

‘Mountains in Mississippi,’ Darin and Brooke Aldridge, from Faster and Further. With Tyler Collins on dobro/banjo, Shad Cobb on fiddle and Barry Bales on acoustic bass, with Vince Gill on harmony vocal.

Back to Brooke, no review would be complete without recognizing two towering performances in particular. One is a piercing rendition of the traditional gospel number “Sacred Lamb” into which the vocalist dives so deep she momentarily obliterates the sensitive, understated backing of Darin (guitar/mandolin), Carley Arrowood (fiddle), Tyler Collins (guitar), Collin Wills (dobro) and Dwayne Anderson (acoustic bass). As a listener you snap to when voices convene on a full-throated gospel quartet-style cry of “oh sacred lamb” at song’s end. Brooke’s other stunning lead is on a bluegrass-tinged take on “Someday Soon,” Ian Tyson’s chestnut made immortal by Judy Collins. Singing free and easy over the chop of Darin’s mandolin and restrained embellishments courtesy Tyler Collins’s mandolin and Shad Cobb’s fiddle, Brooke, to cop a phrase from Springsteen’s “Backstreets,” stands back and lets it all be. Working with a great melody line, she gives a clinic in inspired interpretive singing by letting her emotions free only in short bursts of phrases rising and falling; listen closely in the second verse when she dips into an unexpected bluesy mode with a smidgen of humorous swagger in an otherwise plaintive rendering. But the way she and her musicians connect here, all hearts beating as one, is…perfect. Really perfect. You are flying.