Pete Seeger to the House Un-American Activities Committee (HUAC, August 18, 1955: ” I have sung to many audiences. I have sung in hobo jungles and I’ve sung for the Rockefellers. I’ve never refused to sing for anybody. That’s the only answer I can give along that line. … I am proud that I have sung for Americans of every political persuasion, and I have never refused to sing for anybody because I disagreed with their political opinion, and I am proud of the fact that my songs seem to cut across and find perhaps a unifying thing, basic humanity, and that is why I would love to be able to tell you about these songs, because I feel that you would agree with me more, sir. I know many beautiful songs from your home county, Carbon, and Monroe, and I hitchhiked through there and stayed in the homes of miners. I’m proud I’ve sung for Americans of every political persuasion. … I decline to discuss, under compulsion, where I have sung, and who has sung my songs, and who else has sung with me, and the people I have known. I love my country very dearly, and I greatly resent this implication that some of the places that I have sung and some of the people that I have known, and some of my opinions, whether they are religious or philosophical, or I might be a vegetarian, make me any less of an American. I will tell you about my songs, but I am not interested in telling you who wrote them, and I will tell you about my songs, and I am not interested in who listened to them.

Pete’s refusal to testify earned him a conviction for contempt of Congress in 1961, but a year later, upon appeal, the conviction was overturned. He was, however, blacklisted and did not appear on any broadcast mediums for another decade. His entire testimony before HUAC is available online at http://www.peteseeger.net/HUAC.htm.

Pete Seeger visits The Johnny Cash Show on March 4, 1970 and coaxes the Ryman Auditorium audience to sing and clap along to ‘Worried Man Blues’ and then gives them all a real-world reality check. Posted at YouTube by abargle.

Wanting to Be Pete Seeger

I grew up wanting to be Pete Seeger. Problem was I couldn’t sing; I never got the 5-string banjo down no matter how closely I followed Pete’s instruction manual and accompanying record, How to Play the 5-String Banjo; and try as my 12-year-old-self did in front of the mirror, I could never get my Adam’s apple to jut out like Pete’s.

The first time I saw him was in the mid-1960s at his annual Carnegie Hall Thanksgiving concert. My sister and I had stage seats, and we came home with a souvenir: a sheet of wrapping paper Toshi had made out of newspaper—with a Japanese symbol for peace. Looking back, what I really wonder is that Carnegie Hall allowed Pete a log on stage with an ax, and he duly did some chopping. 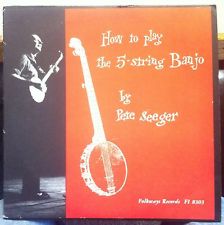 At the Newport Folk Festival in 1969 Pete was on right after Neil Armstrong had walked on the moon. He came out and said he’d just watched it on TV backstage and had written a song. He “taped” the lyrics to the microphone stand with some chewing gum. I don’t know if the song ever had another performance, but talk about “ripped from the news.”

The passion of songs like the vehemently anti-war “Waist Deep In the Big Muddy” spoke loud and clear to a budding lefty in high school, who tried his best to emulate the 12-string guitar sound Pete had on “Turn, Turn, Turn” and loudly sang “If I Had A Hammer” in the privacy of my room (truth be to Peter, Paul & Mary’s version).

Today, I give a copy of the complete Pete Seeger Town Hall children’s concert CD to every newborn I know. Everyone should hear “Abiyoyo” growing up. Everyone should know what it means to sing along. I’ve had young families tell me they knew some of those songs, but never knew where they came from. It’s my own small contribution to what Pete called “the folk process.”

For all the times I saw him over the last 45 years or so, on the sloop Clearwater, at festivals, in concert, I never met him. The last time I saw him was this past Thanksgiving when Arlo Guthrie turned his Thanksgiving concert (which he first started doing together with Pete) into a tribute to Pete, who was frail and a little forgetful, but sitting center stage the whole night. If the banjo playing was largely stilled, and the words tough to find, Pete still knew just how to command that Carnegie spotlight. Wasn’t that a time.

Ira Mayer first wrote about music in the late 1960s for the Rockaway Wave as part of a column he wrote about “high school.” He graduated to the Village Voice his freshman year in college, and wrote about traditional American music (what used to be called folk) as well as rock and roll, cabaret, and jazz in the Riffs column for four years. He was the pop music critic at the NY Post for 13 years. Having also written for Record World, Music Week, Billboard and others, Ira founded EPM in 1988 to cover the business side of entertainment. The company is now owned by Business Valuation Resources, with Ira running the EPM division. He just launched a blog, www.nightmayer.net, to host the jottings of a pop culture junkie.

‘I guess I’ll see ya later’

“I usually do a little meditation and prayer every night before I go to sleep–Just part of the routine. Last night, I decided to go visit Pete Seeger for a while, just to spend a little time together, it was around 9 PM. So I was sitting in my home in Florida, having a lovely chat with Pete, who was in a hospital in New York City. That’s the great thing about thoughts and prayers–You can go or be anywhere.

“I simply wanted him to know that I loved him dearly, like a father in some ways, a mentor in others and just as a dear friend a lot of the time. I’d grown up that way–loving the Seegers–Pete & Toshi and all their family.

Pete & Arlo in an undated concert clip from the ‘70s performing ‘Away Out There,’ the Bob Nolan-penned classic recorded by the Sons of the Pioneers and Bob Wills & the Texas Playboys

“I let him know I was having trouble writing his obituary (as I’d been asked) but it seemed just so silly and I couldn’t think of anything that didn’t sound trite or plain stupid. ‘They’ll say something appropriate in the news,’ we agreed. We laughed, we talked, and I took my leave about 9:30 last night.

“‘Arlo’ he said, sounding just like the man I’ve known all of my life, ‘I guess I’ll see ya later.’ I’ve always loved the rising and falling inflections in his voice. ‘Pete,’ I said. ‘I guess we will.’

“I turned off the light and closed my eyes and fell asleep until very early this morning, about 3 AM when the texts and phone calls started coming in from friends telling me Pete had passed away.

“‘Well, of course he passed away!’ I’m telling everyone this morning. ‘But that doesn’t mean he’s gone.'”

A Song and a Kiss from Judy Collins

Folk singer Judy Collins, a long-time friend of Pete Seeger’s, posted on her Facebook page Tuesday that she sang at the legend’s bedside on his final day of life.

“Yesterday at Columbia Presbyterian, I sang to Pete, reminded him of the times we had together as his listened, his eyes closed, unable to speak to me, but holding my hand, and reaching for it again when I pulled away to wipe away my tears.

“I sang him ‘The Bells of Rhymney’ and reminded him that thast song and the way he played it lured me from the six 12-string guitar–and spoke of times we have had in the 53 years we have been friends, since I saw him sleeping behind Harold’s couch in the office on 57th street his guitar stretched out on the floor beside him.

“Louis and I kissed him and blessed Tinya and Katama, who found us on my one day in New York and met us at the hospital to say our farewells. Great man, great soul.

“Thank you for being my friend all these years, and teaching me to listen for the stories and the hope, and to travel with music to heal and help me and everyone around me. Rest in Peace.”

Judy Collins, ‘Bells of Rhymney,’ the song she sang to Pete as he lay dying on Monday night. Pete was the first to record the song, using lyrics drawn in part from Welch poet Idris Davies’ poetic work Gwalia Deserta, published in 1938.