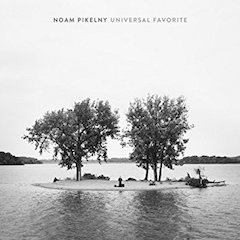 This is one of those occasions when the general public should have access to materials record companies or independent artists send out with CDs, in this case the press release Rounder included with virtuoso banjo man Noam Pikelny’s fourth solo album, Universal Favorite, a project featuring only the artist, his voice and his instruments. Best known as one of the barrier breaking Punch Brothers, Pikelny’s solo work has always been fascinating on multiple levels, and herein he again opens ears to the possibilities of tone and texture the banjo has too often and mistakenly been accused of not possessing. He does this not merely by technique but in his choice of instruments, all with fascinating histories. Seven of the 11 tracks find him employing a 1941 Gibson Style 7 banjo with a Robin Smith 5-string neck (“…found in the 1980s in a pawnshop in Johannesburg, South Africa, and repatriated back to the U.S.”); on two tracks he opts for the truly exotic 1928 National Style 1 Tricone Plectrum 4-string guitar that Pikelny discovered one expert assessing as having “no musical purpose” when it was introduced, and adding further, “that remains true to this day.” Pikelny’s reaction to this appraisal was to snap it up for use on his album.

“Each of these instruments has a unique story and has known the world much longer than I have,” Pikelny says. “Picking them up makes me feel more connected with generations that have come before. Perhaps this bond with old instruments that are filled with character and charisma makes performing solo feel less lonely.”

The Making of Universal Favorite: The Noam Pikelny Story

This is the kind of info the press release imparts that adds depth to what Pikelny presents to us on Universal Favorite, and perhaps coincidentally yet again brings home the limitations of CD packaging (yes, you can go do your own research on these instruments, but really, how many would do so who aren’t musicians or vintage instrument geeks themselves?). Which is not to say merely listing the instruments detracts from the artistry evident when Pikelny gets rolling on the album opening “Waveland,” an original named after the street behind Wrigley Field (home of the World Champion Chicago Cubs, let us note, since it is now possible to describe the team as such for the first time since 1908) but which has the feel of the tide planting a kiss on the shore, to paraphrase a great Carl Sigman lyric, in Pikelny’s masterful sustained rolls, one after another, both soothing and rather awe inspiring in the image the music conjures of nature asserting itself. That useless 1928 National 4-string guitar? Its surprisingly rich, full tone—an earthy sound—produces a pastoral effect on the gamboling pace of “The Great Falls,” a Pikelny original, but is even more impressive on Josh Ritter’s “Folk Bloodbath,” a medley of old murder ballads centered on Mississippi John Hurt’s “Lewis Collins,” a song Rory Block knocked out of the park on her 2013 Hurt tribute, Avalon. Not only does this performance find Pikelny coaxing the sweetest, most gentle sound out of the 4-string but that poignant support is in service to a straightforward, moving vocal performance by the artist himself, who is making his vocal debut most impressively on Universal Favorite. Athletes talk about letting the game come to them and that’s what Pikelny does as a vocalist, by finding a song’s emotional center and then feeling it in his unembroidered baritone delivery rather than pushing for an effect that might wind up melodramatic instead of affecting—it’s much the same way Dylan defends his singing as being on a par with Caruso’s. You don’t have to hit a high C to touch a listener’s heart or mind but you do have to be honest. And Pikelny is nothing if not an honest vocalist—he does it on “Folk Bloodbath” and on the traditional “Old Banjo,” a rather vivid account of a fellow who seems unable to avoid troubles in love and otherwise, a revolting development Pikelny’s charged picking accentuates in service to his downcast vocal. Just as the instruments he uses have long histories, so does this song. It’s the first tune on the first album he ever owned, purchased by his father for him when Noam was eight, titled The Little Rosewood Casket…and Others Songs of Joy by a Chicago folk singer Fleming Brown, one of the early teachers at the Windy City’s vaunted Old Town School of Folk Music and a banjoist deeply influenced by Uncle Dave Macon and Doc Boggs. (Brown also was part of I Come For to Sing, a folk music revue featuring fellow Chicago musicians Big Bill Broonzy, Win Stracke and Larry Lane, with Studs Terkel serving as narrator.)

‘Waveland,’ the opening track from Universal Favorite. Noam Pikelny on a 1941 Gibson Style 7 banjo with a Robin Smith 5-string neck

Yes, Pikelny is a banjo player but an electric guitar makes a delightful appearance when he takes up a 1953 Fender Telecaster played through a Gibson EH 185 amp to back his warm vocal reading of Carl Butler’s minor country hit from 1964, “My Tears Don’t Show” (the B side of a Top 10 country single, “Too Late to Try Again”). The Tele’s rich, fat tone and slight twang evoke a classic country era as do Butler’s lyrics about a man coming to grips with the pain of lost love; moreover, the sincerity of Pikelny’s vocal does justice to the work of a fine but now obscure country singer-songwriter who, as part of the duo Carl and Pearl Butler, had a nice run of country hits in the early ‘60s with Butler-penned tunes; Carl lived long enough (he passed in ’92) to hear Ricky Skaggs take a song Butler had co-written with Flatt & Scruggs and Earl Sherry, “Crying My Heart Out Over You,” to the top of the country chart in 1982. It must be said: an album with songs by Fleming Brown and Carl Butler should be taken seriously. For your faithful friend and narrator’s money, Pikelny’s finest vocal hour arrives with a deeply felt, spiritually resonant take on the traditional “Sweet Sunny South,” whereon the steely sound of the 1938 Kalamazoo KG-11 guitar is in and of itself a heart tugging evocation of the lost world the lyrics lament and which Pikelny drives home with nuanced force within a seemingly deadpan reading of the last, key lyric: Now the path to our cottage they say has grown green/and the place is quite lonely around/and I know that the smiles and forms that I’ve seen/now lie in the dark mossy ground…

‘I’ve Been a Long Time Leavin’ (But I’ll Be a Long Time Gone),’ by Roger Miller, as performed by Noam Pilkeny on Universal Favorite

Following a pair of instrumentals—his original “Redbud,” replete with a rustic ambiance and striking shifts in texture between upper and lower neck chording and riffs; and, from Steven Paul Smith, a deliberate, introspective denouement in the evocative (in title and feel) “Bye”—Pikelny closes the proceedings with a rollicking workout on an obscure Roger Miller tune, “I’ve Been a Long Time Leaving (But I’ll Be a Long Time Gone),” the album’s bluesiest moment and an occasion when Miller’s gift for skewed humor and inspired wordplay was in peak form. Pikelny’s riding the wave of Miller’s lyrics and adding his own two cents to the festivities with equally wild banjo flourishes you can’t help but admire, if not be amused by how well Noam channels Roger on his instrument of choice.

The album title was inspired by an early 20th century advertisement by the S.S. Stewart company touting a popular banjo it marketed as being a “universal favorite.” Unable to resist the audacity of such a claim, Pikelny christened his new long player likewise. He may have intended it ironically, but when the 2017 best-of lists are published, he may find Universal Favorite is exactly what it purports to be.

The Presence of ‘Being’ in Every Note… 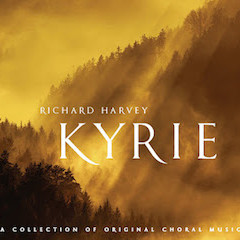