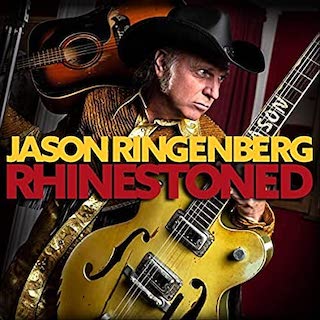 Looking back, looking ahead and speaking to his own time, Jason Ringenberg makes Rhinestoned, his 18th album, one of his most compelling long players, replete with social conscience, a reverence for history as filtered through his unique perspective and some hard driving rock ‘n’ roll co-mingling with his classic tough-edged approach to country music. Lending no-nonsense support in being one of the finest studio aggregates Ringenberg has ever assembled are his long-time collaborator, producer/multi-instrumentalist George Bradfute (“Had I not connected with George Bradfute in 1999 my Jason Ringenberg and Farmer Jason phases would never have happened,” Ringenberg told Lonesome Highways’ Stephen Rapid) , along with redoubtable steel guitarist/fiddler Fats Kaplin (who’s been on every Jason record since 1996), drummer Steve Erbe and a solid quartet of backup singers including Ringenberg’s daughters Adddie and Camille along with Mark Andrew Miller and Kristi Rose.

Setting the tone right off the bat, Jason opens with “Before Love and War,” a co-write with his buddy Arty Hill, that storms out of the gate like a lost Jason and the Scorchers track, stomping and fuming, reflecting Ringenberg’s sense of history in speculating on, essentially, prehistory, before the concepts of love and war were even crystallized. The most direct reference is to Flanders, presumably referencing the bloody battles of WWI in the Dutch speaking part of Belgium, which in even earlier history had suffered through the Eighty Years’ War (1568-1648) and the Thirty Years’ War (1618-1648). Conflict then defines a good part of the album, with some respites on the order of John Wesley’s revered Christian hymn “Christ the Lord is Risen Today,” which begins reverently enough with Jason backed solely by a piano right out of a country church before breaking into a heated Scorchers-style rocking romp that may be the most celebratory version of the grizzled hymn you’ve ever heard, especially when the sizzling guitar solos enter the scene. You could even say the easygoing shuffle version of Hank Williams’s (memorably covered by Jerry Lee Lewis as the B side of his classic “Breathless” single) “You Win Again,” fits the conflict theme since it documents one partner’s grievances over the other’s betrayals, with some added protestations courtesy the spitfire guitar and wailing harmonica.

‘Before Love and War,’ Jason Ringenberg, co-written with Arty Hill, from Rhinestoned

Ah, but there are greater tasks than personal retribution at hand. Dense and swirling, “Nashville Without Rhinestones” finds Ringenberg declaiming not the decline of country music but the decline of Music City itself, selling its soul for condo developments designed to erase any memory of the city’s origins and aspirations. In Ringenberg’s view, what was great about Nashville was embodied in country stars’ rhinestone-studded outfits. Again, from the Lonesome Highways interview, he defined rhinestones as “a symbol of freedom, an affordable escape from the grinding poverty that most of the classic country singers came out of in the ‘40s and ‘50s. When those country singers of the ‘50s and ‘60s wore rhinestones, they were making a statement. ‘I am somebody worth paying attention to.’” As it is, Ringenberg, sounding as folksy as his Farmer Jason character, likens the town to a “sinking ship” filled with “hillbilly ghosts.” For clarification as to where he stands, Ringenberg late offers a genial, guitar-driven toe-tapper in “Stoned on Rhinestones.” True to the conflict theme, this upbeat tale centers on a gent who drinks the honky-tonk Kool-Aid and takes a hard left into a new life chasing those neon rainbows: “Once I had everything money can buy/a three-story house reaching up to the sky/I rode down the road in a black Cadillac/had a big ol’ yard and a pool out back/then I heard ‘Honky Tonk Blues’/now I’m in a honky-tonk payin’ my dues/I’m stoned on rhinestones, nobody saw this a-comin’/my baby says she is gonna leave me/if I don’t quit my guitar thumpin’/I’m stoned on rhinestones, with a Telecaster in my hand…”

‘Christ the Lord is Risen Today,’ Jason Ringenberg, from Rhinestoned

That’s another story and Ringenberg’s brilliance is in taking the topic from the general to the specific as a way of fully fleshing out the issue. Sometimes he does this within a single, topical song—take “The Freedom Rides Weren’t Free,” for example. Written before George Floyd’s murder set off worldwide protests against police brutality, this driving rocker marks and honors the lesser-known Freedom Riders of 1961, the second group of Riders, many from Nashville, who assembled under the radar and out of the media’s eye, to make their own stand for civil and voting rights and racial equality, with predictable results for that era. “They were completely on their own,” Ringenberg explained in an interview with Tahoe On Stage’s Tim Parsons posed at www.jasonringenberg.com. “They had no support from the NAACP or the Kennedy Administration or from any money people, power people or lawyers. They were just a bunch of college kids with no money. They pooled their pocket money to go down to Alabama to get back on those damned buses with no one to back them up. Knowing they were going to get beaten and jailed. It’s an incredible story. It almost brings me to tears when I talk about it.” In the heated chorus, with ringing guitars and thundering percussion supporting him, Ringenberg fairly spits out the chorus: “You can quote your politics or U.S. history/for those who rode those buses, the freedom rides weren’t free.”

Another ride that wasn’t free is chronicled in the bustling “I Rode With Crazy Horse,” a tale told by a mythical companion of the fearless and fearsome Sioux warrior, a character who came to Ringenberg in a dream who “did my part to reinforce” Crazy Horse’s battles with Custer, “the Crow and Blackfeet too/we fought folks that look like you/I don’t care much for you, of course/once I rode with Crazy Horse.” The spin on the tale is this narrator trying to put himself between Crazy Horse and his assailant, but too late; Crazy Horse is buried “where no one knows/where no one looks and no one goes/so no one can descrate or Christianize his final fate…” Ringenberg: “The song goes in and out of reality and my own creation but that is supposedly true that his parents and that friend exhumed his grave and they buried in a place where he wouldn’t become a tourist attraction and they wouldn’t put up a Christian headstone. Crazy Horse obviously is not Christian. They buried him in a secret place that to this day no one knows where it is. Eventually, they would have made a wild west spectacle out of it. They’d have figured out a way to desecrate it. Yep, that would have happened with Crazy Horse. He was the most famous and most uncorrupted Native American leader of his time. They would have had a field day with him. As it is, we don’t even a picture of the guy and that’s pretty cool. That’s as it should be.”

‘I Rode with Crazy Horse,’ Jason Ringenberg, from Rhinestoned

To these historical inquiries, add in a jubilant country-rock workout on the Ozark Mountain Daredevils’ “Time Warp,” Ringenberg’s homage to what he regards as the best of country-rock; a haunting, fiddle-rich rendition of the Carter Family’s “Storms Are on The Ocean,” with an emotional co-lead vocal by Kristi Rose; and, in a majestic production, a twangy, lilting interior monologue, “My Highway Songs,” in which Ringenberg wonders, “Is there a place in this world for my highway songs?” This is not surrender, happy to report.

“If you talk to almost any artist on this planet, any musician or creative spirit, and they’re all going to have doubts if they’re worthy of being able to stand on this platform and do what they do,” Ringenberg says. “And I do that too. Although it may be a little more dramatic with me because I am not a commercial smash success. So I wonder and think, Do I have the capabilities of, the talents to be a real recording artist? The numbers don’t really show that (I do) but the impact I’ve had on fans does show it. The connection I’ve made does show it.”

Evidence in support of this assertion: Rhinestoned. Case closed.

Follow this link to the full Tahoe On Stage interview with Jason Ringenberg.

Music Connecting People, Wherever They May Be