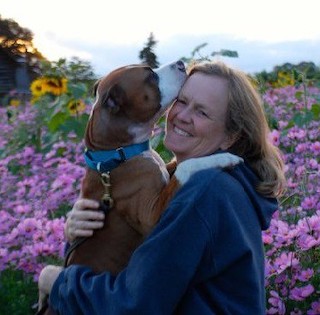 There was a time–when you sought a dog trainer because you just brought home a puppy, or your older dog needed to learn better behavior (if not new tricks)–you’d contact that neighbor who had a reputation of being good with dogs, or maybe consult the notices thumbtacked up on the grocery store bulletin board. These days, those sorts of trainers–lots of experience, keen instincts, but unencumbered by relevant educational degrees or certificates–are still plying their trade, and arguably, given the surge in pet pooch population, in greater numbers than ever. But over the years, a segment of trainers has emerged who favor serious schooling in academic settings and elsewhere, often with an emphasis on continuing education, not unlike that undertaken by doctors, lawyers, CPAs and others.

Trish McMillan both embodies this province and helped pioneer it.

Allowing shelter dogs to play together is becoming more and more popular in North America. The number one risk for euthanasia in shelter dogs is behavioral deterioration, and for dog-social dogs, play is the antidote. It can also be used to resolve arousal issues, to bring fearful dogs out of their shells, and, of course, to improve dog-dog social skills and make better adoption matches by learning each of our dogs’ play styles. In this talk, Trish McMillan offers her perspective on the magic of dog playgroups.

If that suggests McMillan traveled a serious, academia-focused track, there was actually a more circuitous journey involved. “People often ask,” McMillan said in a January Talking Animals interview, ” ‘How do you become a dog trainer? How do you become a behaviorist?’ And nobody really wants to follow my path, because it was a weird and convoluted one.”

“First you go to art school, and you get a degree in drawing and painting, and then you try not to starve for a few years,” McMillan recalled. “Then you buy a dog from a breeder, and then you find out there are dogs dying in shelters, and feel guilty, and start working with shelter dogs. And then you start apprenticing as a trainer, and get some weird dogs from the shelter, and then it becomes an absolute obsession. I must know everything there is to know about training and behavior.”

While a degree in drawing hardly qualifies as a crucial credential for an animal behaviorist, McMillan was quick to note the value of artistic endeavors for those in the training profession. “What I’ve noticed with my trainer friends is a lot of us started out in creative fields, whether it’s theater or music,” she said. “And that creativity really helps when you get into training just being able to think outside of the box. We come up with interesting and unique solutions. It’s never a bad thing to have a creative mind.”

Perhaps drawing on that creativity, McMillan found a way to round out her post-secondary education with hard science:  While she was taking undergrad classes at U.C. Berkeley, she took Steven Lea–a star professor at The University of Exeter, who was spending his sabbatical at Berkeley–out to lunch, made her case, and Lea “smoothed the way for (McMillan) to” be admitted to Exeter. “I’m probably one of the few people out there,” she noted wryly, “with a Bachelor of Fine Arts and Master’s of Science combo.”

Fast forward to the present, carrying an armful of degrees and certificates, and many years of experience working with dogs, cats and horses (as a whippersnapper, she trained and showed horses)–including a seven-year stint with the ASPCA, some of that time as director of the animal behavior department at the ASPCA’s New York Shelter–McMillan is now a respected behaviorist available for consultation about issues individual clients may be experiencing with their pets, as well as an in-demand speaker at conferences, workshops and seminars.

From that vantage point, she mentions some of the most common behavioral issues she sees in dogs, such as leash reactivity (“dogs who lunge and bark, usually at other dogs, but sometimes also at humans when you’re walking them on leash”), and in cats (“the most common issue I get are litter box training issues”).

Trish McMillan shares practical and effective techniques for low-stress handling of dogs and cats in shelters and pounds.

But a larger part of our Talking Animals conversation was devoted to another behavioral topic that, at first blush, might seem wholly uncommon, precisely because, given that it’s so trying to discuss, it’s often left unspoken. That topic is behavioral euthanasia, which McMillan defined by explaining “in some extreme cases, there are dogs and cats and horses who are suffering mentally enough that we choose to euthanize them,” she said. “It’s often an aggression issue, where people and other animals are at risk, but it has also happened for anxiety. There’s very often, I believe, a chemical, biochemical, physical reason behind it. With a horse, it might be arthritis of the spine that’s causing them to buck and become dangerous toward humans.

“A friend of mine, Sue Alexander, had a client dog, did a necropsy after his death, and they found he had a brain malformation that was probably causing migraine-level headaches for much of this dog’s life, and that’s what was causing this sporadic rage aggression that he was showing. And he did end up euthanized for his behavior.”

Folks reading these last three paragraphs can be excused for reacting with an array of feelings, perhaps including “That’s really upsetting”… “Surely, there must always be other options to euthanizing the animal”…”Behavioral euthanasia sounds like an ultra-rare scenario” To which I might reply: Yeah, especially if you’re a true animal lover, this solution is really upsetting…It might be human nature to cling to the idea of alternatives always existing before deciding to euthanize that animal; McMillan will have something to say about that in a moment…Behavioral euthanasia is nowhere as rare as you’d imagine.

Underscoring this last point, McMillan explained that she helps run Losing Lulu, a support group founded by Alexander for people who have euthanized their animals for behavior, and that in just two years, the group has gained 9000 members worldwide. The explosive growth of Losing Lulu has amplified not only McMillan’s concerns in this realm, but also her own personal experience.

“When I started off as a ‘baby’ trainer, I was really sure I could fix everything,” she said. “And, I mean, most things can be fixed with training and medication and environmental changes. But what I ask people sometimes is, if the best psychiatrist in the world worked with Jeffrey Dahmer in prison, would you feel comfortable with him being released and living next door to you? Or, would you let him look after your teenage children when you’ve gone out to the movies? I think there are some mental issues that are just not solvable.”

McMillan went on to recall a particular puppy from a litter she had raised that proved emblematic of this issue. “He ended up being one of the most aggressive dogs I’ve ever lived with,” she said. “And as a professional trainer, I did all the right things. I trained those puppies from the time their eyes opened, with cookies and love. And we socialized, and we went to puppy classes, and I got the dog out, and had him meet lots of people and lots of dogs. And at three weeks of age, when I was doing just normal puppy handling, rolling him over, feeling his toes, he was growling at me…

“So, you can’t tell me that something happened in his puppyhood that made him aggressive–I had that dog from birth,” she emphasized, noting he was “explosive, dangerous” and recounting his “launching-for-your-face kind of aggressive episodes that were quite sporadic and hard to predict, and therefore hard to train around.”

She pauses, and sighs. “He was probably the best trained dog I’ve ever had, because he had to be…But all of the training and all of his socialization could not bring him around, and we tried everything. We tried medication. We tried holistic methods. We tried supplements. We tried diet changes. And that’s when I found that there is no such thing as ‘trying everything.’ At 18 months of age, we decided to euthanize him, and it was such a hard thing. It’s something nobody talks about, so people think it never happens, and it becomes this cycle. And I’m here to tell you, it’s really often they’re born this way.”

It’s precisely because behavioral euthanasia is “something nobody talks about” that I wanted to spend considerable time discussing it with McMillan. As lousy and conflicted as she feels about her personal experience with it, she can at least take comfort in knowing that she’s a top-notch behaviorist who knew exactly what to do, did it and still had a wildly unpredictable, dangerous dog on her hands.

I surmise that others in the same awful boat (but who are not trainers or behaviorists) must be contending with intense feelings of grief, regret, and shame. And, I imagine, many are plagued with thoughts along the lines of “Jeez, I’m probably the only person who actually had their dog euthanized when there didn’t seem to be any further solution.”

So, it’s probably hugely helpful and therapeutic to learn there’s a support group, with 9000 members, expressly for people going through this wrenching experience. “Yeah,” McMillan said of Losing Lulu, “it’s been really healing for a lot of people. And it’s a really different type of grief. This is why we don’t allow people in who have lost dogs to old age–there are lots of places you can go for help with that.”

When it comes to seeking training or behavioral help for your animal, it may come as no surprise that McMillan recommends focusing that search on professionals who have degrees and/or certificates. “Well, I feel pretty strongly about putting my work up to peer review, which is why I have all of the letters after my name,” she said. “I think it shows that the trainer has an interest in continuing education. I think when you stop learning, it’s a real tragedy. There’s always more to learn. So, I do look for people who have pursued some type of certification in training or behavior, not that going to university necessarily makes you a better trainer, but it can make you a better critical thinker. It can give you access to the literature to continue updating and revising what you do for your animals.”

And, if you can also bring a degree from art school to the proceedings, so much the better.

Follow this link to the Trish McMillan interview on Talking Animals: https://talkinganimals.net/2021/01/trish-mcmillan-noted-animal-behaviorist/