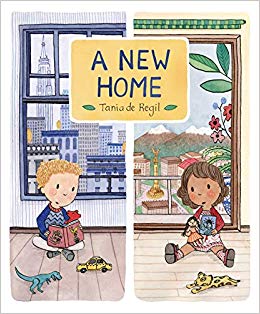 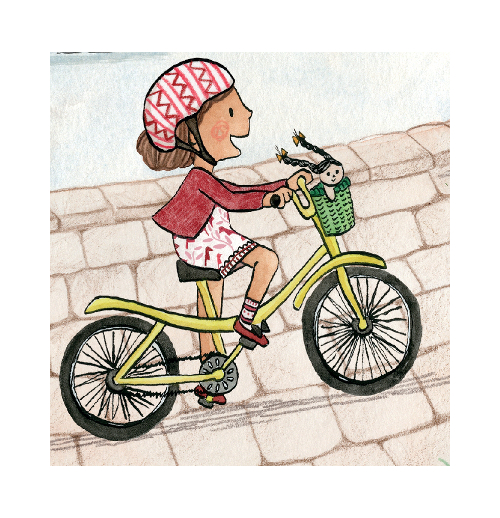 On the title page spread of Tania de Regil’s A New Home (Candlewick, April 2019), we see the outline of the U.S. and Mexico and a dotted line that connects New York City to Mexico City. A boy walks from NYC to Mexico, and a girl heads the opposite direction, on her way to the U.S. Thus begins this story of the anxieties and thrills of moving, told from the point of view of each child, who isn’t just making a move but is also leaving behind a country and its culture. 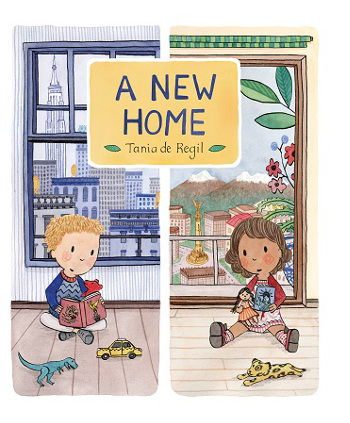 Right away in the brightly colored opening spreads, we learn that each set of parents has told the children they’re moving — the boy to Mexico City from the U.S. and the girl from Mexico City to New York. The children are unsure about leaving and note the things they’ll miss, each spread giving us a simultaneous glimpse of their lives. The children show readers their respective cities and the sounds and sights that they are reluctant to leave behind. For instance, one spread (“Cheering loudly for our team to win at the stadium”) shows the boy and his father at a U.S. baseball stadium on the left, but on the right we see the girl and her father at a soccer game on the right. By placing their narratives side by side, readers feel relief about the children’s anxieties: for instance, when the children fret about where they will play in the new city, we see the answer as we watch the girl and boy play in theirs, as they say goodbye and take in its wonders for a final time. I like how De Regil doesn’t avoid mentioning some flaws of each city. In one striking spread, we read that “my home can be hard on some people,” as the American boy and his mother pass a homeless man on the street, and the Mexican girl and her mother pass a homeless woman, giving her some money.

This is De Regil’s publishing debut in the U.S. She currently lives in Mexico City and often travels to the U.S. This book is also available in Spanish (Un Nuevo Hogar). This hopeful tale, perfectly suited for preschool and early elementary readers, shows us the common humanity in two cultures on two different spots on the map, while also showing us their unique offerings.

“In spring,” writes April Pulley Sayre in the closing note of her newest picture book, Bloom Boom! (Beach Lane, February 2019), “flowering plants can bloom a few at a time, over weeks and months. But sometimes, many bloom all at once. There’s a boom of blooms.” And this joyous book celebrates that very thing. 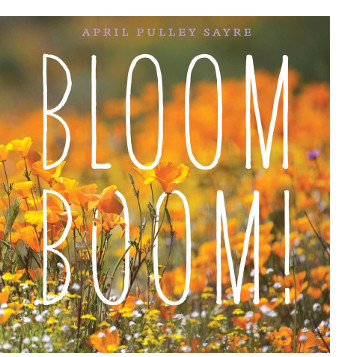 With vivid photographs, Sayre celebrates the arrival of spring — when “seeds sprout” and “stems pop out” and the world begins to bloom. Many spreads feature the type of design you see in the spreads in this post (two photographs, divided by a thin white line), but they alternate with full-bleed spreads that showcase flowers in bloom. It’s on these latter spreads that we repeatedly read the ecstatic “Bloom, boom!” In the final four spreads, the pace slows a bit with a series of three spreads featuring the two-illustration lay-out, the momentum building to a final spread of California poppies covering a hillside near Los Angeles and a final jubilant “BOOM!” in larger font and all caps. This careful pacing, as well as the repeated refrain of “bloom, boom!” throughout the book, makes it a great read-aloud.

Two backmatter spreads, which include websites listed as “Bloom Resources,” provide details about the bloom of flowers all over the country, as well as name the flowers seen in the spreads throughout the book. Sayre doesn’t only feature flowers here: children will enjoy spotting the rabbit, bee, and more.

Exuberant and bursting with color, this is a picture book that rewards on every level. It’s another engaging poetic photo-journey from Sayre. Here are a couple more spreads. 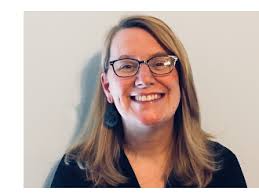 Julie Davidson (Jules) conducts interviews and features of authors and illustrators at her acclaimed blog, Seven Impossible Things Before Breakfast, a children’s literature blog primarily focused on illustration and picture books. The above blogs were posted at 7-Imp on March 27, 2019, and March 20, 2019, respectively. 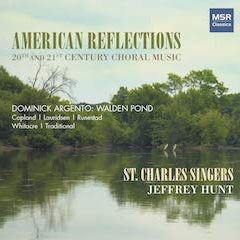 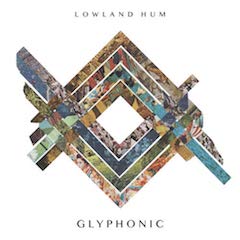 Springing Into Spring with Leslie Evans