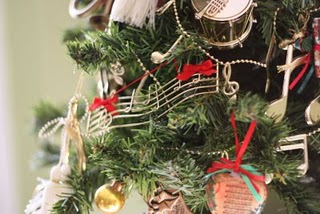 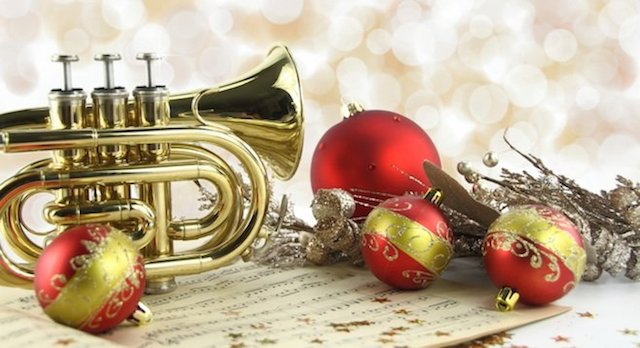 It is that time of year when choirs and other ensembles produce CDs themed on the season. This year I have ten choral discs to choose from plus one non-choral disc, all aiming to put the particular ensemble’s stamp on the Christmas repertoire. For liturgical choirs, a Christmas disc often means the encapsulation of the ensemble’s regular Christmas repertory whilst for others it is the chance to do something a little different. All those under consideration bring an interesting twist to the repertoire.

For many people, Christmas means carols, and carols means David Willcocks. As a result of his involvement with, and contribution to, the seminal volumes of Carols for Choirs, his versions of many carols have entered the communal consciousness, and the carols selected for inclusion in the book have become standards.

The result is a wonderfully grand way to hear the familiar carols, with Willcock’s brass and organ opening to “O Come, All Ye Faithful” making a great CD opener (Willcock’s brass introductions to the carols were used with the Bach Choir which he conducted from 1960 to 1998). And the smaller items sung by the choir alone are equally appealing, a lovely way to remember a major musical influence on our Christmas music.

David Willcocks arrangements open and close Christmas from Selwyn too, where the Chapel Choir of Selwyn College, Cambridge, directed by Sarah MacDonald with organist Shanna Hart and Ben Comeau, mix the popular carols with other Christmas fare. So we get “Stille Nacht,” “Angelus ad Virginem” and “In dulci jubilo” but also” Rudolph the Red-Nosed Reindeer,” “Santa Claus is Coming to Town” and “White Christmas.” Using young women rather than Worcester’s boy trebles, the choir is recorded in the chapel of Selwyn College and the result has a lovely intimacy, rather than Worcester’s large scale grandeur, and the Christmas songs in popular vein are a complete delight.

“White Christmas” features on Carols from Chelsea, where the chapel choir of the Royal Hospital Chelsea and director William Vann with James Orford (organ) perform the work at the end of their program of carols. But there is a pleasant surprise in this version:  Vann, Orford and the choir are joined by In-Pensioner George Hatton, one of the residents of the hospital, for a lovely performance of Irving Berlin’s classic.

Elsewhere on the disc Vann’s choice is an intelligent mix of the popular and the lesser known, including Ralph Vaughan Williams’s “The Truth from Above,” Rutter’s “Dormi jesu,” Warlock’s “Benedicamus Domino,” Michael Head’s “The Little Road to Bethlehem” and Francis Pott’s “Hodie Christus natus est,” plus of course two David Willockcs arrangements. The choir (recorded not on home territory but at Temple Church) uses young professionals (older than the Selwyn students), and they give finely poised, shapely and fine-grained accounts of the carols, culminating of course in “White Christmas,” which is a total delight.

Another London chapel choir, the Choir of Her Majesty’s Chapel Royal, directed by Huw Williams with Martyn Noble (organ), has produced a carol disc. Adeste Fideles, Christmas Carols from Her Majesty’s Chapel Royal has David Willcocks arrangements, plus those by Malcolm Sargent, George Guest, Andrew Carter and John Rutter, alongside lesser known pieces and contemporary works such as Jonathan Dove’s atmospheric “The Three Kings.” And not all are carols, we have Thomas Weelkes Hosanna to the son of David, Stravinsky’s “Ave Maria” and a finely controlled account of John Tavener’s “The Lamb,” as well as Britten’s “New Year’s Carol.”

We are back to boy trebles on the top line (and looking at the choir’s photo, I was impressed with the racial diversity in the treble line-up), but recorded in the relatively intimate chapel at St James’s Palace. The performances are full of vitality and character, I particularly liked the way we move from Rutter’s “Sans day carol” to the vibrancy of “Mary Had a Baby” (an American spiritual arranged by Malcolm Sargent). A number of the composers had links with the Chapel Royal and the Royal family, giving the selection a nice feeling of family.

Over at Wells Cathedral, A Wells Christmas sees Matthew Owens conducting Wells Cathedral Choir, with Jonathan Vaughn (organ). Here we have a number of Willcocks arrangements, plus those of Sargent, Rutter and Carter, but there is also Matthew Owens’ own lovely “Lullay mine liking,” two of Rutter’s own pieces, Bob Chilcott’s “The Sparrow’s Carol” and Thomas Hewitt Jones’ “What child is this?” I suspect that this repertoire is a strong reflection of what goes on at Wells at Christmas. Both the boys choir and the girls choir are used on the recording, making a total of 36 trebles, with 12 men, (compared to the Chapel Royal’s 11 trebles and six men). The performances are poised and beautifully finished, with a lovely sense of control.

Thomas Hewitt Jones has his own disc too, almost a Christmas single! Christmas Party features three short pieces (total running time around 13 minutes), with Hewitt Jones’ Christmas Party for solo violin(Simeon Hewitt Jones) and orchestra (the Royal Ballet Sinfonia, conductor Gavin Sutherland), proving a lively arrangement of Christmas carols and songs, plus a couple of short items including the carol Child of the Stable’s Secret Birth.

We return to an all male choir for Christmas with St John’s, which features the choir of St John’s College, Cambridge, directed by Andrew Nethsingha with Joseph Wicks (organ), performing a number of Christmas choral favorites ranging from William Mathias’ “Sir Christemas” to Elizabeth Poston’s “Jesus Christ, the Apple Tree.” There is an attractive sprinkling of lesser known pieces such as Andrew Carter’s “Mary’s Magnificat,” and Carl Rutti’s “I Wonder as I Wander,” as well as the recent St John’s commission, Michael Finnissy’s “John the Baptist,” plus Bob Chilcott’s “The Shepherd’s Carol” (commissioned for King’s College Choir).

We open with the Chilcott, which makes for a magical, almost spine-tingling start. I was particularly taken with the clear textures and spicy harmonies of Cecilia MacDowell’s “O Oriens” and Finnissy’s lively new piece is no either sing either with its tricky rhythms. This disc makes a fine showcase of a choir on the top of its form.

Moving away from the organ loft, in To Bethlehem the Kantorei of Kansas City (a professional group based in Kansas), conducted by Chris Munce, present an interesting mixture of Renaissance motets by Melchior Vulpius, Claudio Merulo, Jakob Reiner, Giovanni Bassano, Blasius Ammon and contemporary music by David Basden (born 1957), Jocelyn Hagen (born 1980), Douglas Helvering (born 1977), Matthew Culloton (born 1976), Ivo Antognini (born 1963) and Kim André Arnesen (1980). The program is constructed as a telling of the Christmas story, and the relatively unusual selection of composers (both Renaissance and Contemporary), ensures an interesting journey. This is an impressively performed disc, with the seventeen-strong choir switching between Renaissance and various contemporary modes.

The King’s Singers Christmas Songbook mixes songs such as “Santa Claus is Coming to Town” with popular carols in the Kings Singers’ own distinctive way, with arrangements by Alexander L’Estrange, Keith Roberts and Robert Rice. The ensemble’s particular vein of intelligent close-harmony singing still stands out as a beacon, and the selection manages to successfully encompass both the serious (Gustav Holst’s “In the Bleak Midwinter” and “Silent Night”) and the frivolous (“Frosty vs Rudolph, the re-boot”). 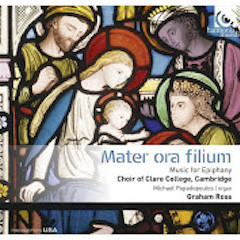 Another a cappella group, Siglo de Oro, director Patrick Allies, takes a rather interesting route. Drop Down, Ye Heavens, Advent antiphons for choir & saxophone, is a collaboration with the saxophonist Sam Corkin. The centerpiece of the program is a set of the great O Anthems, for choir and saxophone, commissioned from Will Todd (born 1970), Matthew Kaner (born 1986), Samuel Rathbone (born 1986), Francis Pott (born 1957), Richard Allain (born 1965), Gareth Wilson (born 1976), Stuart Turnbull (born 1975) and Ralph Allwood (born 1950). The result is an impressive debut disc, with fine singing indeed from the twelve to fourteen strong group, and a lovely range of stunning textures in the works with saxophone. Definitely a hit for those looking for something seasonal and imaginative but not traditional.

The final disc in my selection is not strictly Christmas, it is music for Epiphany. Mater Ora Filium sees Graham Ross and the Choir of Clare College, Cambridge with Michael Papadopoulos (organ) performing a striking program that moves from Lassus’s “Omnes de Saba” through John Sheppard’s “Reges Tharsis” and Jean Mouton’s “Nesciens mater,” to Judith Bingham’s “Epiphany,” and Judith Weir’s “Illuminare, Jerusalem,” culminating in Bax’s glorious “Mater ora filium.” Ross has added a few hymns as well, to provide a lovely balanced program. I was particularly taken with the sound of the young voices in Bax’s taxing work (and the sopranos certainly nail the very long top C required of them), but equally the Sheppard and the Mouton provide some finely crafted polyphony and a lovely blended sound.

This is a remarkable varied mix of discs, certainly with ‘something for everyone.

‘Once in Royal David’s City,’ from Christmas at Selwyn, the Chapel Choir of Selwyn College, Cambridge

‘Ding Dong! Merrily on High, Choir of the Chapel Royal, from Adeste Fideles: Christmas Carols from Her Majesty’s Chapel Royal

Trailer for To Bethlehem, the new Christmas album by Kantorei KC

‘Silent Night,’ The King’s Singers, from the album Christmas Songbook