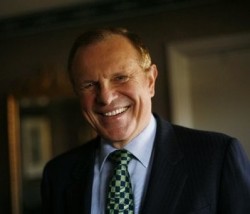 If I were an animal deciding where to live, I’m pretty sure I would choose New Jersey-chiefly because I’d know that Raymond Lesniak had my back.

Lesniak is the longtime Democratic state senator there, having held that seat since 1983.

During this extended tenure, Lesniak has developed a singular track record of working on behalf of animals and animal welfare, although he’d be the first to acknowledge he’s something of a latter-day critter advocate.

“I’ve been a champion of many, many issues, and it was later, rather than earlier, in my long political career that I’ve become a champion for animals, ” Lesniak explained during his Talking Animals interview of Sept. 28 (recorded on Sept. 26). “But it’s brought so much satisfaction into my life to become aware of what great joy animals bring on earth to everyone. We can enjoy them by protecting them, and not being cruel to them.”

If Lesniak came late to the animal advocacy party, he’s certainly made up for lost time.

Indeed, the senator’s work in the realm of animal-oriented legislation includes helping make New Jersey the first state in the nation to ban pet stores sourcing from puppy mills, a bill to halt bear hunting, proposed legislation to fight the illegal trading of tiger parts, a ban on shark finning.

He also pushed for a law banning trophies from endangered species from entering New Jersey, an effort that’s been impeded, he explained, by loopholes in federal laws.

‘There is absolutely nothing humane about killing bears for fun’: Sen. Raymond Lesniak speaks at a protest held in front of the New Jersey capitol building in protest of the state’s annual bear hunt supported by the anti-animal state Governor Chris Christie.

Lesniak recently sponsored “Nosey’s Law,” which prohibits the use of elephants in traveling acts, and is named after a pitiful performing elephant who lives in Florida.

And he previously proposed a ban on the use of gestation crates–small metal enclosures often employed in the high-volume universe of factory farming in which female breeding pigs are confined during pregnancy and, sometimes, for most of their lives.

This piece of legislation, despite having drawn strong support from both Republicans and Democrats, was vetoed by his periodic foe, New Jersey Governor Chris Christie.

Lesniak remains highly steamed about this, more concerned about the animals’ plight than the political machinations involved.

“These pregnant sows spend 80 percent of their lives in these crates, where they can’t even stand up and have no opportunity to even turn around,” he said.

“These are sentient animals-they feel, they have feelings. Any humane person, whether they eat meat or not, would not want them to be held in captivity for their entire lives, in the manner that they are.

“Unfortunately, Christie kowtowed to the pork industry-one of his biggest supporters is a big pork magnate, a billionaire. But once we get a new governor, that’ll be one of the first things we’ll get through.”

If you’re starting to get the impression that Raymond Lesniak can be enormously outspoken, you’re reading him loud and clear.

If it occurs to you that after a political career in New Jersey spanning more than 35 years, he might have a very clear idea who that “new governor” should be, you’re clearly on to something.

And if you’re thinking that he’s thinking that this new governor should have the surname “Lesniak,” well, you move to the head of the class.

Of course, he didn’t explicitly reveal his career plans in this Talking Animals conversation. But someone this inherently candid doesn’t do coy well, and even a card-carrying lunkhead could read between the lines of his comments not announcing his forthcoming gubernatorial bid.

But we’re kind of getting ahead of ourselves. We’ll return to his thoughts on Christie and his, uh, possible successor in a moment.

Right now, we want to stick with Lesniak’s legislative efforts on behalf of an assortment of creatures, and what influenced that lawmaking leaning.

“Well, we always had a dog,” Lesniak responded, when asked what role animals played in his family during his childhood. “And we always cherished our dogs, and we were always sad when they passed. I had a friend who talked me into getting my first rescue. It was a German shepherd–that was the first time I got a rescue, and I’ve only had rescues ever since that time.

“The love of my life passed a few years ago–Brittany, I had her for 19 years. When I went to the shelter to pick out one of the rescued animals there, it was in West Orange, and they had various different dogs in cages. And you see which ones appeal to you. Then you walk them, and they go back into their cages.

“Brittany was the third dog I walked, and unlike the other dogs, who went back into the cages, she came running after me. She chose me. I said ‘That’s the one.’ I had her for 19 years, and for three years [after she died], I said ‘Never again.’ ”

But, as you might’ve surmised by now, Lesniak’s longstanding passion for animals ultimately neutralized his grief over Brittany.

Lesniak managed to shake off that heartbreak, and ended up adopting not one, but two dogs, Sandy and Penny, who periodically added a few well-placed barks to the interview. Talking animals, indeed.

‘Animals matter. All animals matter and we should treat them with distinction and with the fact of the matter that they are here on Earth created by the same force that created us. We should treat them with kindness and understanding and not in the way that humans are treating them today.’ Sen. Lesniak address the New Jersey Ivory Crush, a World Elephant Day rally held on August 12 at Liberty State Park in Jersey City, NJ.

Over the course of his more than three decades in office, Senator Lesniak has pursued a broad portfolio of progressive causes and legislation, advocating for environmental protection and various social measures, including sustained efforts to pass legislation to allow same-sex couples to marry in New Jersey, and ending the death penalty in that state.

I asked Lesniak if he views pursuing animal welfare or animal protection laws as all part of a piece with those legislative efforts.

“I do, ” he said. “I’ve often [quoted] Dr. King, who said ‘the moral arc of the universe is long, but it bends towards justice.’ And I feel that it’s a moral issue that we protect animals, and don’t treat them cruelly, and certainly don’t do things to destroy their existence on the face of the earth.”

How did your colleagues respond when you began sponsoring animal-related bills? Were they puzzled? Critical? Dismissive?

“Well, I do exert a lot of power and influence and authority in the Senate, so I have been able to get my way on these pieces of legislation,” he said. “I do get some shrugs, there’s no doubt about it. And some ‘Another?’ ‘Elephants? Nosey’s Law?’ And we do get criticism sometimes from people, who say ‘Aren’t there more important things to do?’ Well, you know, you can do more than one important thing at the same time.

“And it is important for New Jersey to lead the way. I’ve been saying this often, and I will continue to say it as long as I’m in public office, [I want] to make New Jersey the humane state. That applies to everyone, including animals.”

So he doesn’t take kindly to anyone thwarting that mission, and Christie–and the governor’s veto power–may represent Lesniak’s most formidable obstacle.

It takes very little prompting for the Senator to weigh in on the Governor. “Well, he is very charming in person,” he allowed. “Unfortunately, that charm does not translate to acts of governing. I do not have a high view of him at all. Yes, he has signed some very important laws that I’ve sponsored. And the reason why I got him to sign both the ivory law and the trophy ban is because I emphasized the money being made by terrorists from this activity. So that caught his eye, and I was able to get that done. [Otherwise], it’s a struggle, but life is made up of struggles, and you have to keep fighting to overcome them.”

Toward the end of our conversation, he all but announced his plans to seek the Democratic nomination to succeed Christie, saying an official announcement was coming in three weeks.

(Sure enough, he did later announce those intentions. Then a few days later–having surveyed the prospects of another prominent New Jersey Democrat–Lesniak decided he would instead pursue a 10th term in the state Senate.)

Christie wasn’t the only national figure we discussed.

We spoke hours before the first Presidential debate was to be held, so noting that Donald Trump has done a lot of business in and around New Jersey, I asked Lesniak what he thought of him.

“Well,” he quickly answered, “I don’t have a very good view of Donald Trump”-

Why am I not surprised?

“Look, I’ve played golf with him, and he cheats at golf! He is a known cheater at golf. Go to any club where he plays and they’ll tell you that. If you cheat at golf, you’ll cheat at anything. But obviously, that’s not the worst thing about Donald Trump. It’s just like Chris Christie–it’s no surprise they’re so close–he’s a very charming person, incredibly charming guy in person. But his views are frightening.

“Frightening for America, frightening for the world. I’m very, very troubled by the fact that a lot of Americans are ignoring his bigoted statements, his lack of compassion, his treatment of women.

“Look, people are obviously upset, for a lot of different reasons. But I do ultimately have faith in the American public that when the day of reckoning comes, it won’t be Donald Trump who will be our next President of the United States. ”

How Will Musicians Control Their Credits in the Digital Age?