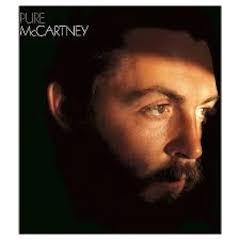 Me and my team came up with the idea of putting together a collection of my recordings with nothing else in mind other than having something fun to listen to. Maybe to be enjoyed on a long car journey or an evening at home, or at a party with friends. So we got our heads together and came up with these diverse play lists from various periods of my long and winding career. The word career is a bit misleading because to me it has been more like a musical adventure than a proper job. It pleases me, and often amazes me, that I’ve been involved in the writing and recording of so many songs, each of them so different from the others. But on my next long car journey this will be the soundtrack for the ride, and a great ride it has been coming up with these songs. So jump in your hot rod or relax in your hot bath and give these ditties a spin and remember that if half of the pleasure we had in putting this collection together communicates itself to you, we’ll all be riding high!”

So says Sir Paul McCartney of Pure McCartney, his self-curated four-CD overview (also available in a truncated two-CD version, and in a handsome four-vinyl album with liner booklet but containing only 41 of the 67 songs on the four-CD set) of a solo career that has spanned 46 post-Beatles years. Chew on that fact, friends, as well as the fact of such longevity inevitably producing an ebb and flow of quality work; but in Paulie’s case, the ebb and flow has been mostly towards the good, and on occasion the great, as this album underscores by opening with “Maybe I’m Amazed,” the signal, and most Beatles-ish, track off his first, eponymous solo album, a work that both captured the cultural exhale bridging the Fab Four’s departure at the close of the turbulent ‘60s they had helped shape to the introspective, calming work of the early ‘70s singer-songwriters movement. Interestingly, James Taylor straddles both eras in that he began his career as the first non-British act signed to the Beatles’ Apple label and was recording his self-titled debut album at the same time John, Paul, George and Ringo were cutting the White Album. The James Taylor album on Apple, released Stateside in February 1969, contained a couple of songs that would become JT classics (“Carolina In My Mind” and “Something In the Way She Moves”), other songs a bit more produced (producer Peter Asher enlisted arranger Richard Anthony Hewson to orchestrate a handful of tracks) but not so much as to dim the quality of the artistry on display. In Rolling Stone, Jon Landau raved about the LP, calling it, in part, “the coolest breath of fresh air I’ve inhaled in a good long while,” but in the moment of its arrival it became little more than a cultural curiosity. A year later Taylor was signed to Warner Bros. and, exactly one year after his Apple debut, released his sophomore album, Sweet Baby James, also a Peter Asher production. Its sound, the artist’s voice and the artist’s songs became the standard bearer of the first significant post-‘60s musical trend. Two months later, McCartney’s one-man-band solo debut was released, and despite the controversy around it (his fellow Beatles wanted him to delay its release until the group’s Let It Be album was on the market) it topped the U.S. chart and, more tellingly, seemed for the most part to have anticipated the singer-songwriter era, an indicator, perhaps, of the profound impact James Taylor’s songs had on him during the latter’s short-lived Apple tenure. Paulie is on record, so to speak, as being knocked out by, first, Taylor’s demos and then by a live Taylor tryout: “I just heard his voice and his guitar and I thought he was great.” Listening to Pure McCartney beginning with “Maybe I’m Amazed” and ending, by McCartney’s choice, mind you, with the dreamy, folkish “Junk” (originally intended for the Beatles) is maybe McCartney’s way of insisting we consider his near-half-century solo career as being the work not of a rock ‘n’ roll icon, not even as that of a former Beatle, but as a singer-songwriter, an artist whose deepest music is intensely personal but with universal accessibility and subtly reflective of a host of influences. Maybe all along Paul McCartney really wanted to be James Taylor, and he’s brilliant enough to pull it off.

Official video for ‘Early Days,’ one of the tracks included on Pure McCartney

No sooner had this thought struck me than did I realize it was B.S. Paul McCartney, after all, wrote “Yesterday,” “Let It Be,” “The Long and Winding Road,” “Penny Lane,” and most certainly had his own singer-songwriter voice long before JT arrived on the scene. What he has been, from the time we heard him belt “Kansas City” in that impossible Little Richard howl on The Beatles’ Second Album, is a great assimilator able to bend others’ signature sounds into something distinctly his own, and in his own voice. Consider all the echoes of other artists’ styles on the White Album alone. If I hadn’t been disabused by my silly James Taylor analogy simply by thinking harder about it before committing the above thoughts to paper (so to speak), I gradually became so as I listened to Pure McCartney chronologically, wending my way through the country-tinged toe-tapper “Heart of the Country,” the unrelenting, horn-driven intensity of Wings’ rocking “Jet” (a fabulous Paulie production too, by the way), followed by the simple, sincere, hymn-like reverence of “Warm and Beautiful,” a piano-based ballad right in Paulie’s tenor wheelhouse, soft and tender, in which the conviction, the sincerity in his voice imbues seeming Hallmark card lyrics with profundity, right up to a chorus in which he sings

Tells the story of our love (on “our love” his voice strains to hit a high note, and this too works tremendously as an effect, almost childlike in its charming overreach)

Moonlight on the water

Brings me inspiration ever after…

We are now but four songs into a 67-song odyssey and already I’m thinking, first, of the shame attending any and all dismissive attitudes towards Paulie’s solo career, and second, that it’s time to rethink said solo career because it’s even better than his true believers thought. Three songs from his second solo album, Ram, suggest some revisionist history is in order. Savaged upon its release in May 1971, Ram had critics ready to burn McCartney and his album at the stake (the abovementioned Jon Landau thoroughly trashed it in Rolling Stone, and his was not a minority report) and had John Lennon picking up his instrument to wonder in song, “How Do You Sleep.” But “Heart of the Country,” the slyly topical grinder “Too Many People” and the baroque British Music Hall evocations in the shifting tempos and textures of the near-surrealistic “Uncle Albert/Admiral Halsey” are so strong as to demand a full reassessment of Ram, which is no masterpiece but rather a long player on which the best moments not only abrogate whimsies such as “Monkberry Moon Delight” and “Ram On” (neither included on this collection) but in fact make them harmless detours en route to a satisfying destination.

‘The Song We Were Singing,’ from the 1997 album Flaming Pie, is included on Pure McCartney

The Great Assimilator surfaces anew on “The Song We Were Singing,” a poignant waltz from 1997’s outstanding Flaming Pie album—Paul’s first project post-Beatles Anthology and at that point his first solo project in some four years. Supposedly it reflects on the pre-Beatles days when Paul and John would retire to Paul’s room in the McCartney family home at 20 Forthlin Road and make music, and dream. Funny thing is, its lyrics seem less McCartney than they do Paul Simon-ish in both rhythm and erudition, at least in the verses, when, over his fingerpicked guitar, Paul opines:

For a while we could sit/smoke a pipe/discuss all the vast intricacies of life/we could jaw through the night/talk about a range of subjects/anything you like, oh yeah…

A live version of ‘Jenny Wren’

‘Another Day,’ Paul McCartney, as featured on Pure McCartney

Herein, Paul McCartney always comes back to the songs he was singing at any particular time. Yes, there are trifles—“Big Barn Bed,” “Silly Love Songs,” “Hi Hi Hi,” “Junior’s Farm,” a few others—but these too are cancelled out by the musical intelligence and artistry and sheer emotional commitment he brings to bear on most of the songs here. Drink deep the scintillating spiritual frenzy of “Sing the Changes” from Paul’s more experimental band (with Martin Glover) known as The Fireman; the palpable ache of “Jenny Wren” (named after a character in Dickens’s novel Our Mutual Friend and quite resembling same in Paul’s character portrait of a woman who lived with the burden of feeling too profoundly all the world’s ills) with its overtones of a darker “Blackbird” (no pun intended), a haunting refrain–“How we spend our days casting love aside/losing sight of life/day by day”–and a quite eerie solo played on the duduk by Pedro Eustache (from 2005’s Chaos and Creation in the Backyard album, this track earned Paul a Grammy nomination for Best Male Pop Vocal Performance); and the enveloping sadness of the alienated female protagonist of 1971’s “Another Day” (released as a single, the song was recorded during the Ram sessions but omitted from the album), at the time the most significant song about a bored woman since Glen Campbell’s 1968 hit “Dreams of the Everyday Housewife.”

Paul McCartney and Martin Glover (aka Youth) as The Fireman, ‘Sing the Changes,’ included on Pure McCartney

Of the many genius moves distinguishing Paul’s choices for this project, his sequencing is some kind of master stroke. Rather than following a chronological order from 1970’s McCartney to 2013’s New (the title track is included here), the four discs hew to a flow seemingly based on the songs fitting together as a complete musical statement irrespective of time. His astute curating, and even more perceptive sequencing, gives Pure McCartney a White Album texture in its variety of styles and atmospheres. Everything sounds au courant, defying time and tide, towering over whatever would challenge its grandeur.

In fact, as I sat mesmerized by the unfolding musical panorama and overcome by the memories attached to it—I don’t know how many times I’ve been through it all now, starting at the beginning (“Maybe I’m Amazed”) and staying with it to the 67th song (“Junk”), never once considering doing anything but what I was doing right then—all I could think was how blessed I was to be alive at this moment, consumed by the greatness I was privileged to hear, even in the few lesser moments to be found on the four discs representing nearly a half-century’s art.

Maybe I’m amazed, and maybe you will be too. This is pure Paul McCartney, au courant, defying time and tide, towering over whomever would challenge his grandeur. Celebrate him now. Right now. 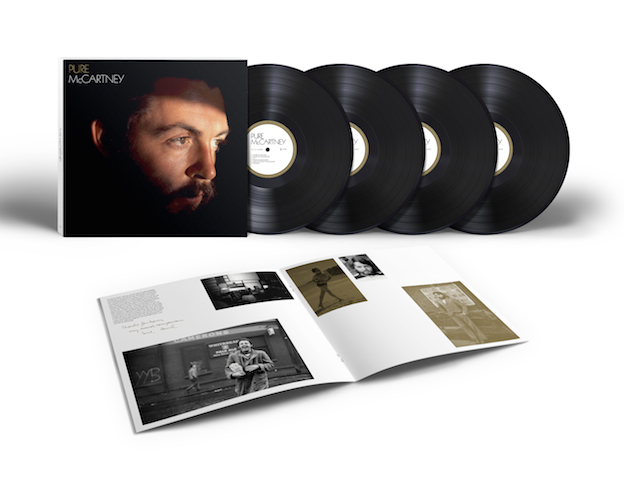 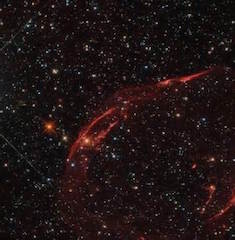