When it comes to soulful blues guitar—only flowery when it needs to be but otherwise sharp, succinct, to the point, with masterful deployment of textures and tone—Georgia-born and –bred Tinsley Ellis ranks in the upper tier of modern-day practitioners. Should anyone doubts the veracity of the previous statement, even the briefest immersion in Ellis’s aptly titled new long player, Tough Love, should make converts of even the flintiest skeptics.

Released on his own Heartfixer label, Tough Love finds Ellis with top-drawer support courtesy some fellows best known for glide in Delbert McClinton’s stride for a few years: keyboardist Kevin McKendree is on a hot roll throughout (on organ, piano and Mellotron—even tympani on one cut), but the fireworks he generates in his sizzling dialogue with Ellis’s screaming guitar on “Seven Days” are truly wondrous to behold; the solid, right-there rhythm section keeping everything bolstered is comprised of bassist Steve Mackey and drummer Lynn Williams. Fleshing out the lineup on one of the album’s most effective songs, a slow boiling treatise on the dangerous extremes in which folks will engage “All In the Name of Love,” are the dynamic duo of Jim Hoke and Steve Herrman on sax and trumpet, respectively, adding a lush backdrop to a moody number reminiscent of classic Stax/Volt formulations.

From Tough Love, ‘Give It Away,’ Tinsley Ellis

From Tough Love, ‘In From the Cold,’ Tinsley Ellis

Ellis’s legion of fans will get what they came for when the music starts. The hard stomping “Seven Years” opens kicks things off with a deep, relentless groove; bruising guitar solos ranging from thick-toned runs to high, piercing, upper-neck wails; and a solid vocal from Ellis confessing to his jealousy contributing to a long relationship’s decline and fall; he gives you some vintage southern rock flavor in the slide flourishes of “Hard Work” but damn if I don’t hear some “Jeepster”-era Marc Bolan in the combustible, sputtering guitar soloing and even in the cool, seductive vocal—and then, like that, he segues seamlessly into the slinky maneuverings of “All In the Name of Love.” On to Chicago he goes for the lowdown blues ballad, “Should I Have Lied,” a wounded but frank lament for the end of an affair that never had much traction to begin with— “time to stop the lyin’/time to be movin’ on/our love was never that strong…”—keyed by McKendree’s evocative atmospherics on the 88s and Ellis’s stinging retorts to same in buttressing his unambiguous lyrical assertions. On the rockin’ shuffle “Everything,” Ellis, with McKendree getting busy on the right hand keys behind him, sends a message to a would-be paramour about the adjustments, shall we say, she needs to make if she wants to be his woman (the title is telling here)—a litany given added oomph when embroidered by Tinsley’s keening, Butterfield-like harp cries. More than a hint of Levon Helm infuses Ellis’s existential musings in “Give It Away,” an interesting musical hybrid formed of raw Delta acoustic slide punctuations and full, organ-drenched gospel reckoning. At the end, the dramatis personae bring it all home in stirring fashion, with a beautiful broken-hearted blues ballad, “In From the Cold,” a sumptuous, majestic performance, with Ellis’s finest vocal performance—nuanced and bruised—elevated to a higher plane of hurt by McKendree’s organ and Mellotron and Elllis’s own searing, fuzzed out guitar embodying the upheaval and isolation he feels in a breakup’s aftermath. If Tough Love isn’t Tinsley Ellis’s finest moment, then someone has a tough job ahead in arguing to the contrary. This album is true to its title through all 10 original tunes, the supporting cast is in tune spiritually and musically with the texts, and the titular artist is there in full all the way. Tough Love? Tough stuff. 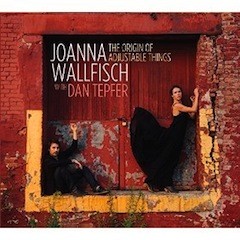