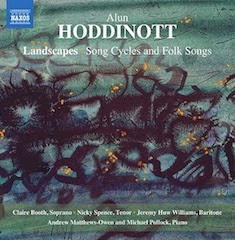 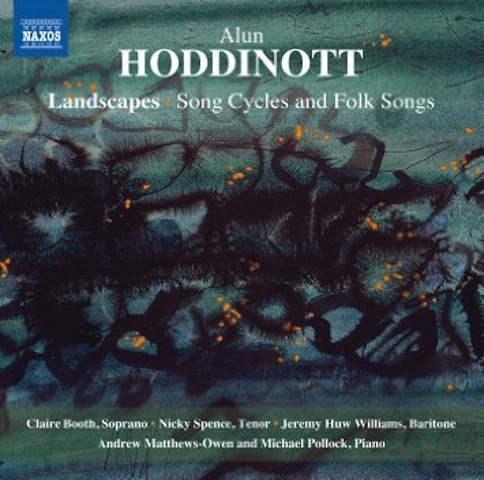 When Alun Hoddinott died in 2008, the loss not only deprived Wales of her most gifted native-born composer but likewise diminished the global music community in ways that perhaps even now are only vaguely appreciated and understood. Like the great composers of the past, Hoddinott was a master of forms great and small, a melodist of sublime talent, and a brilliant but humble inheritor of the legacy of composition in the British Isles that extends from William Byrd and his contemporaries into the Twenty-First Century. Like Elgar and Vaughan Williams, he was the musical Everyman of his native land, communing with the collective musical psyche of Wales with unique insights, and like Percy Grainger he was the champion of folksong traditions scorned by many “serious” composers. As a composer of songs, Hoddinott did not shrink from melody, a sin for which many advocates of contemporary Classical Music permit no absolution. Recorded in 2009 and 2010 by the British Music Society and now reissued by Naxos, Landscapes is a disc that explores some of Hoddinott’s most fastidiously crafted songs for voice and piano. Songs such as these are like musical prisms: when lyric voices wielded by intelligent singers shine upon them, the patterns of their interpretive reflections are virtually limitless. The colors and shapes that flash through the performances on Landscapes are invigorating. If the magnificent landscapes of Wales sang, these would surely be their songs.

Nearly two hundred years ago, many of the finest works of Johann Sebastian Bach had been forgotten until Felix Mendelssohn rediscovered and revitalized them. Though Hoddinott’s legacy is far fresher in audiences’ minds now than Bach’s was in the first half of the Nineteenth Century, there is no question that Welsh pianist Andrew Matthews-Owen is Hoddinott’s Mendelssohn. An indefatigable advocate for Hoddinott’s music, Mr. Matthews-Owen here offers the composer, who was aware of the initiative that produced Landscapes but sadly did not see it come to fruition, an extraordinary tribute with warm-toned, imaginative, and heartfelt playing. An insightful musician who displays great sensitivity to both the nuances of each song and the individual interpretations of the singers he accompanies, Mr. Matthews-Owen proves at least as thoughtful a champion of Hoddinott’s music as Mendelssohn was of Bach’s. His understanding of the inner structures of the music is obvious, but it is his unmistakable affection for these songs that makes hearing Landscapes such a gratifying experience, just as it clearly made his collaborations with the dedicated singers featured on the disc so rewarding.

From Alun Hoddinott’s Song Cycles and Folk Songs, Nicky Spence with Two Songs of Glamorgan (No. 1. In Pontypriss My Love Doth Dwell: Andante; No. 2 Farewell to Llangfelach: Allegro non troppo): ‘the sound of Gower​ sunrises in his voice, the timbre as fresh as the dew-kissed blossoms of spring…’

Composed in 1975 to texts by Emyr Humphreys​, Landscapes (Ynys Môn, Op. 87) is a deeply personal cycle examining themes of love reflected in nature, the recurring imagery of rough-hewn paths, mirrors, and flowers solidifying the continuity of the songs. In Landscapes and all of his performances on this disc, tenor Nicky Spence has the sound of Gower​ sunrises in his voice, the timbre as fresh as the dew-kissed blossoms of spring. There is an almost unsettling quality in the immediacy of his response to text: when he sings piano and pianissimo in the higher reaches of the music, his resonant shaping of Hoddinott’s melodic phrases is like thought upon which the listener is somehow intruding. In the opening “Mynydd Bodafon,” the elasticity of Mr. Spence’s timbre as he sings the lines ‘This is a complex mountain’ and “We must show it respect/Take off our shoes/And use the path like a carpet” is splendidly expressive, and he devotes equal resources of focused, flexible tone to the lovely “Someone has planted daffodils among you/And in springtime/They are flowers on all your graves” in “Din Lligwy,” in which he and Mr. Matthews-Owen trade phrases with the subtlety of violinists playing Bach’s D-minor Double Concerto. The emotional significance of the lines “The minstrel gallery/She had built with love is broken” in “Llys Dulas” is palpable, and tenor and pianist shape a starkly emotional performance of “Traeth Bychan.” There is a subdued melancholy in the lines “We have counted the stones/And measured them/But nothing can teach them to sing” in “Hen Gapel,” and Mr. Spence descends into the meaningful depths of both music and text without artificially darkening or distorting his tone. He also sings the Two Songs from Glamorgan, composed in 1990, with languid sensuality that perfectly suits the sentiments of the texts, the English translations of which are by Geraint Lewis. The contrasting but strangely similar sentiments of “In Pontypridd dwells my true love” and “Oh Llangyfelach fare thee well” are given sagacious treatment by both Mr. Spence and Mr. Matthews-Owen.

The expansiveness of their musical cooperation finds a perfect outlet in Hoddinott’s 1985 settings of texts by Ursula Vaughan Williams, The Silver Hound (Op. 121). The sparseness of the sound world conjured in “Prologue” ideally conveys the mood of the crucial line “Memory is my silver hound stalking days that time has hidden,” and here and in “Lullaby” and “The Schoolboy” Mr. Spence infuses an element of mystery into his tone. In “The Soldier,” he and Mr. Matthews-Owen unleash the operatic power of “My shadow,/My brother,/My youth,/My loss,/All history” without exaggerating either the vocal line or the accompaniment. Mr. Spence delves directly into the heart of “Do you understand this,/Beauty,/As I speak to you in the words of other lovers?” in “The Lover,” and the aura of learned sincerity that he and Mr. Matthews-Owen impart as the text examines the benefits of experience in “The Statesman” is potently understated. The bleakness of the line “I am my own ghost now” in “The Old Man” sets the tone for this song and “Epitaph,” both of which are delivered by Mr. Spence with intellectual probity that never inhibits his mellifluous vocalism.

The 1994 cycle One Must Always Have Love (Op. 152, No. 3) is one of the most solemnly beautiful marriages of words and music conceived in the Twentieth Century, and soprano Claire Booth and Mr. Matthews-Owen devote to it an outpouring of restrained romantic cogency. The opening song, “Sonnet,” is a setting of a text by Christina Rossetti, and Ms. Booth exhibits a dreamy ambivalence in the line “I wish I could remember that first day.” She and Mr. Matthews-Owen build to a stirring climax in “Daisy,” giving Emily Dickinson’s words a light but impactful reading, cresting on the rousing “We are the flower, Thou the sun!” Alice Bliss’s “Tasmanian Poem” possesses an enigmatic literary profile that Hoddinott deciphered in music of exotic colorations. The soprano weights every syllable of the line “And I cling to the thought of you” with heartbreaking simplicity. The shading of her tone in “The Ragged Wood” lends W. B. Yeats’s text a chilling directness that grows more pointed with each stanza. Both she and Mr. Matthews-Owen recognize the importance of Yeats’s conceit of mining the increasing isolation of the lines “Would none had ever loved but you and I,” “O that none ever loved but you and I,” and “No one has ever loved but you and ​I​.” Unlike many song cycles composed in the past forty years, One Must Always Have Love is a true cycle in its depiction of an emotional journey, and Ms. Booth and Mr. Matthews-Owen provide the listener with a panoramic account of this superb music.

Towy Landscape (Op. 190), composed in 2006, transforms a text by Eighteenth-Century poet John Dyer into a fascinating scena for soprano, baritone, and two pianos. Mr. Matthews-Owen is joined by Michael Pollock, whose playing of the piano secondo part matches the level of his colleague’s performance. Ms. Booth sings astoundingly, maintaining absolute control and the rounded beauty of her tone throughout the wide range of the music. Baritone Jeremy Huw Williams makes valiant efforts at being an equal partner for Ms. Booth, but though he sings capably on the whole there is a plainness to his performance that is all the more apparent alongside Ms. Booth. In unison passages, he occasionally loses focus in terms of phrasing and breath control. Ms. Booth’s musicality carries the day, however, and the electricity of the music is sonorously discharged.

Hoddinott’s 1982 settings of Six Welsh Folksongs in translations by his wife Rhiannon receive from Mr. Spence performances of wide-eyed wonder, his boyish tones giving the songs an alluring air of spontaneity. Both “Two Hearts Remain” and “O Gentle Dove” sparkle with uncomplicated feelings in which Mr. Spence revels. His singing of “If She Were Mine” is movingly wistful, and “Ap Shenkin” and “The Golden Wheat” draw from both singer and pianist performances of compelling tenderness. Mr. Spence brings the picturesque spirit of a troubadour to his singing of “Fairest Gwen.” He and Mr. Matthews-Owen reveal the astuteness of Hoddinott’s folksong settings, their performances confirming that these gems of Welsh lore deserve inclusion in the canon of the composer’s Art Songs.

A man of integrity and generosity, Alun Hoddinott was unstinting in his support of fellow composers and artists. That his own work deserves equal promotion is affirmed by the quality of the songs on Landscapes. From Mozart to Wolf, any composer of Lieder might dream of hearing his or her songs performed with the endearment that Hoddinott’s receive on this disc. The sole disappointment of Landscapes is that the composer who inspired such fondness, both personal and musical, was taken before he could hear a disc that is as much a paean to his importance to the music and musicians of Wales as a recording of twenty-six of the most graceful songs of the past forty years.

Recorded at the Menuhin Hall, Yehudi Menuhin School, Cobham, Surrey, England, on 14 October 2009 (One Must Always Have Love and Towy Landscape), 29 October 2009 (Landscapes, The Silver Hound, and Six Welsh Folksongs), and 18 February 2010 (Two Songs from Glamorgan)

About the author: Joseph Newsome is the author of the essential classical music blog, Voix des Arts: A Voice for the Arts. Born in the Shenandoah Valley of Virginia in 1978, he studied piano and violin in his youth and advanced to vocal studies at the university level. Opera and Classical Music are his passions and, as he writes, “I am dedicated to ensuring that, to paraphrase William Faulkner, they do not merely endure but triumph in the 21st Century.”