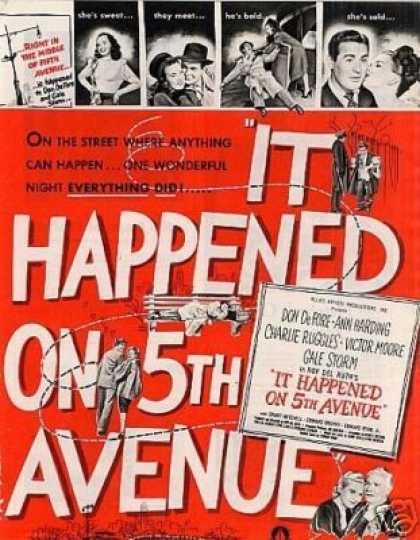 Being a female of a certain age, I have very fond and specific memories of a little movie called The Parent Trap. Not the Lindsay Lohan remake, but a film from the 1960s that starred Haley Mills, Brian Keith, and Maureen O’Hara. But the actor who has the strongest memory for me will always be an old man named Charles Ruggles who played the grandfather of Mills and father of Maureen O’Hara. There was something very familiar about Ruggles that made me instantly identify him as a familiar face…a face I realized years later has the same connection for many people. He is overlooked today, but in the 1930s his easy mix of roughness, sweetness and charm made him a star of many comedies.

Perhaps my favorite film to star Ruggles, excluding my childhood nostalgia, is a Christmas film titled It Happened on 5th Avenue. Ruggles, as he often did, plays a man of many means in the holiday film, whose has lost touch with his daughter (Gail Storm) and is divorcing his wife (Ann Harding). Ruggles, away from New York for the winter, has left his 5th Avenue mansion empty and city tramp Aloysius T. McKeever (Victor Moore) “borrows” it, as he does every winter. With a shortage of housing in the city, war veteran Jim (Don DeFore) is taken in, as are his friends the Temples (Alan Hale Jr. and Dorothea Kent). When Trudy O’Connor (Storm) arrives expecting for her home to be empty, she pretends to be a poor single girl to stay with the make-shift family, but soon must introduce her father Mike (Ruggles) and her mother (Harding) to the uninvited house guests, asking them to pretend to be tramps as well so Jim never knows she’s one of the wealthy he despises (and more specifically, daughter of the man who bought his apartment building). 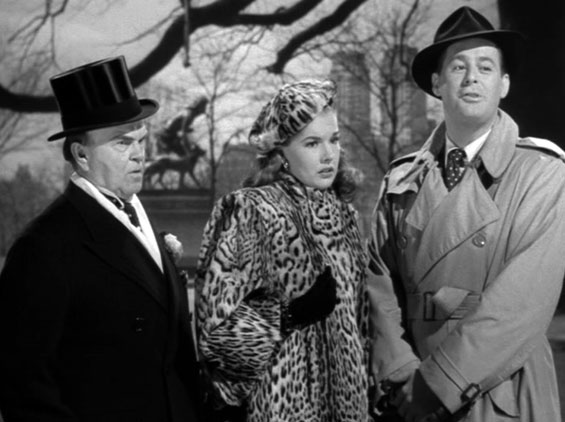 It Happened on 5th Avenue may seem extremely implausible and strange, but somehow, the inner logic of the film works from start to finish. The movie is one of the few films made in the 1940s, which not only feels that it takes place in New York City but actually did film in New York City (there are several scenes which were noticeably on location). And the film benefits from this very New York centric element, as the urban tribe is alive and well in this kind of setting. Like microcosms of small towns, people come together.

If the name It Happened on 5th Avenue doesn’t ring a bell, it might be because it is sandwiched between two better known Holiday classics, It’s a Wonderful Life (1946) and Miracle on 34th St (1947). But in some ways, It Happened on 5th Avenue brings about two elements of these two Christmas films, the urban style of 34th St and belief and praise of community in It’s a Wonderful Life (Capra nearly directed the film before having to give up the property). And unlike It’s a Wonderful Life, which treats Mr. Potter as a mere villain, Ruggles’ wealthy Mike is a man whose redemption is completely possible, and ultimately, completely plausible.

Review by Lesley Coffin at prettycleverfilms.com

From the 1930s and 1940s, with a couple of dips into the 1950s, herewith a collection of vintage Walt Disney winter-themed cartoon gems. The guide below features original release dates and key personal information. Good family entertainment for a cold holiday season evening together. Posted at YouTube by ToonTomb. 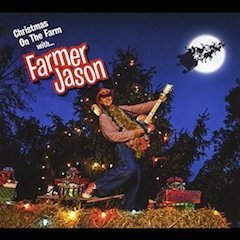