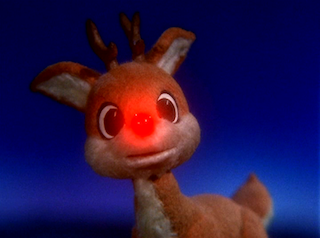 Told and Sung by Burl Ives

Adapted from a story by Robert May

Music and Lyrics by Johnny Marks

On Sunday afternoon of December 6, 1964, NBC broadcast the debut of a new Rankin/Bass Productions (Thundercats, Silverhawks, Frosty the Snowman, Frosty Returns) animated holiday tale based on the popular seasonal song by Johnny Marks, “Rudolph the Red-Nosed Reindeer.” It featured an animated Burl Ives in the narrator’s role, much as the company’s animated Frosty the Snowman classic had used the great Jimmy Durante to tell the story of the jolly, happy snowman. Rather than traditional cel animation, Rankin-Bass employed a stop-motion technique with puppets, similar to George Pal’s Puppetoons, but which they promoted under the trademarked name “Animagic.” Rudolph’s voice was done by Billie Mae Richards (Bobby in King Kong). Richards reprised her role in a couple of follow-ups, Rudolph’s Shiny New Year (1976) and Rudolph & Frosty’s Christmas in July (1979).

The Rankin-Bass Rudolph was an instant holiday classic, garnering a 50 share of the audience, a remarkable number especially in an era with fewer viewing choices than today’s TV. This year marks the 50th anniversary of the TV special, and with it the arrival of a special Collector’s Edition DVD that is both the best of times and the worst of times. As per the latter, try to overlook the inclusion of several extra features that don’t amount to much save for the “Rudolph Unwrapped” feature offering some behind-the-scenes looks at the actual production of the original production; the good news is that this is the near-complete 1964 version with cuts previously made for commercial breaks restored. Other good news: the awful Destiny’s Child video that was on previous recent releases has been mercifully excised. Readers are advised to check other reader reviews at Amazon before purchasing; it may be that older versions are more to your liking.

The ‘Holly Jolly Christmas’ scene, with Sam the Snowman (Burl Ives) leading the singalong, from Rudolph the Red-Nosed Reindeer

“It’s a feel-good story of redemption, with a distinctive, magical look to it,” Rick Goldschmidt, author of The Enchanted World of Rankin-Bass, told Contra Costa News reporter Chuck Barney. “Obviously, it’s a part of the holiday tradition for many families.”

Paul Soles, who provided the voice for Rudolph’s pal, Hermey the Elf, told Barney he believes the story’s enduring appeal lies in its theme of outcasts rising up to be heroes.

“I don’t think there are many kids who, while growing up, didn’t at some point feel like an outsider or like they didn’t measure up,” he says. “So it’s not difficult to relate to—and love—these characters.”

With the help of Goldschmidt, reporter Barney unearthed 10 obscure facts about the animated Rudolph production.

Rudolph might appear to be an all-American reindeer, but he and his pals were lovingly brought to life overseas by Japanese stop-motion animators working in a building that had previously been used to test engines for fighter planes. In fact, many of the Rankin-Bass “animagic” specials were shot in Japan.

While the animation for “Rudolph” was done in Japan, the voice work was performed almost entirely in Toronto by Canadian actors. They were largely known for their fine work in radio dramas, which, at the time, were still very popular north of the border.

Speaking of the people behind the puppets, it might come as a surprise that Rudolph was voiced by a woman. Billie Mae Richards, then 43, was an actress and singer who had a knack for doing little-boy characterizations. Late in life, Richards became a neighbor of Soles at Toronto’s Performing Arts Lodge, a housing complex for showbiz vets. She died in 2010 at the age of 88.

Like many screen stars, Santa Claus and little Rudolph have had some cosmetic work done. The two original puppets were in miserable shape when discovered in someone’s attic in 2005. Santa’s fluffy eyebrows and half his mustache were missing, as was Rudolph’s famous nose. After being appraised on “Antiques Roadshow” (estimated value: $8,000 to $10,000), they were bought by a fan and restored to mint condition by a Los Angeles animation studio.

From the 1964 Rudolph the Red-Nosed Reindeer TV holiday special, the elves break out in song as Mr. and Mrs. Claus look on approvingly in ‘We Are Santa’s Elves’

On the Island of Misfit Toys, the Dolly for Sue doesn’t appear to have anything wrong with her, and for decades, fans wondered why she was there. Rankin thought all the speculation a little silly, so he concocted a silly backstory. Dolly, he claimed, suffered from depression and self-esteem issues.

6. Making a side trip

The original 1964 airing of Rudolph did not have Santa traveling to the Island of Misfit Toys on Christmas Eve to rescue its downtrodden residents. Some disappointed viewers protested, and the show’s sponsor, General Electric, persuaded Rankin and Bass to alter the ending. Score one for the outcasts.

7. His song went down in history

Marks, who in 1949 penned his tune about a reindeer with an incandescent snout, initially was reluctant to lend the song rights to television. Recorded by Gene Autry, Andy Williams and others, “Rudolph” was his gold mine, and he feared overexposing it. Marks not only relented, he wound up writing all the show’s other songs.

Burl Ives, the voice behind the show’s dapper narrator, Sam the Snowman, was a late addition. Sam was to be played by Larry Mann, the guy who voiced Yukon Cornelius. But NBC and General Electric thought the show needed some star power. Enter Ives, who had been one of the most popular folk artists of the 1950s folk boom.

In the original script, baby Rudolph was supposed to be delivered to Donner and his wife by a stork named Gus. The sequence, however, was cut for time.

Even now—in an era of DVDs and splintered audiences—Rudolph remains a crowd favorite, as the special typically wins the Nielsen race on the night it airs. Last year, more than 13 million viewers tuned in to see Rudolph rescue Christmas once again.

Source: “’Rudolph the Red-Nosed Reindeer’: 10 Things You Didn’t Know About the Holiday Classic,” by Chuck Barney, Contra Costa Times, from The Daily News of Newburyport

For the complete history of the real-life tragedy that spurred Robert May to write for his four-year-old daughter a poem for that would be eventually be transformed into a cultural and multimedia phenomenon known as “Rudolph the Red-Nosed Reindeer,” be sure to check out our feature in this issue, “You’ll Go Down In History”—and How.” 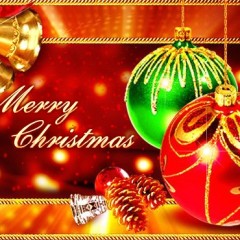