Last year was a good one for gospel music, with a number of contemporary artists gaining mainstream recognition and an impressive new class of up and coming artists introducing themselves on record. It was also, however, a good year for many of the artists that either laid the groundwork for or thrived in gospel’s golden era of the 1950s, thanks to three essential anthologies of vintage gospel recordings dating back to the 1940s and returning to print some powerful performances from ensuing decades, which were otherwise lost to history. Gospel editor and founder/editor of The Black Gospel Blog Bob Marovich weighs in on three new collections worthy of inclusion in any serious gospel fan’s collection.

I HEARD THE ANGELS SINGING

When it came to recording post-war gospel quartets, Ernie Young’s Nashboro Records of Nashville gave Don Robey’s Peacock Records a run for its money. A major among the independents, Nashboro captured (and thereby preserved) gospel singing from some of the leading quartets, groups, and soloists of the golden age and beyond.

Although a few Nashboro artists have been anthologized commercially on CD— Maggie Ingram, the Hightower Brothers, and Madame Edna Gallmon Cooke come to mind—a chronological taste of Nashboro from soup to nuts has not been available to the public until now.

Thanks to Tompkins Square, I Heard the Angels Singing, a four-CD gatefold box package of 80 Nashboro gospel goodies, with liner notes by Opal Nations, is ready for the holidays. The box set is produced by gospel music mavens Mike McGonigal, Kevin Nutt and Tompkins Square founder Josh Rosenthal.

Young had two significant assets: his record store/mail order business and an association with WLAC radio, the 50,000 watt Nashville station that could be heard just about all the way to the moon. With Nashboro Records spinning on WLAC turntables and Young selling the discs across the country, the company couldn’t lose, even in the earliest days, when its recording equipment was primitive and the piano wasn’t always kept tuned.

The Consolers, ‘Give Me My Flowers’ (1957), as featured on I Heard the Angels Singing

The first CD of I Heard the Angels Singing is arguably the most captivating because it contains the set’s most uninhibited and raw recordings of quartets and groups. The great gospel basses Dickie Freeman and Jimmy Jones can be heard with the Skylarks and Sons of the South, respectively. Former Soul Stirrer R.H. Harris chirps like a bird on the Christland Singers’ “You’ve Got to be Born Again,” and a pre-soul Lou Rawls is on the Chosen Gospel Singers’ “Trouble of this World’s Condition.” Nashboro’s top selling quartet of the 1950s, the Swanee Quintet, is here, as is the husband-wife duo the Consolers, whose “Give Me My Flowers” is a classic.

For sheer hard singing, the Fireside Singers’ “Get Your Soul Right” (1953) and the Sons of Faith’s “Since I’ve Been Born” (1961) are tough to beat, although tracks by the Bevins Specials and the Hightower Brothers, with the late Sugar Hightower on lead, come close. The Brooklyn All Stars’ “I Stood on the Banks of Jordan,” featuring Hardie Clifton on lead, captures the song’s lyrical angst better than any version I’ve ever heard.

Fireside Singers, ‘Get Your Soul Right’ (1953), from I Heard The Angels Singing

I Heard the Angels Singing does not limit itself to quartets. Nashboro’s chief gospel thrushes Edna Gallmon Cooke, Lucille Barbee, Maggie Ingram, and Dorothy Love Coates are also on the anthology. Among the males, Brother George Carter renders E.O. Excell’s “I Do, Don’t You” with the kind of vocal embellishment that drove a young Thomas Dorsey to sacred songwriting when he heard Rev. Nix sing the hymn at the 1921 National Baptist Convention. On the other hand, Brother Joe May would have been better represented on the set by his husky “I’ve Been Dipped in the Water” instead of “Silent Night.”

Dorothy Love Coates and the Gospel Harmonettes, ‘Heaven, I’ve Heard So Much About Heaven’ (1968), from I Heard The Angels Singing

The audio quality of the recordings is very good, despite the fact that some selections sound pulled directly from the original discs. The chronological presentation enables the listener to hear gospel music transition from its minimalist post-war combo of piano/guitar/organ, akin to a gospel garage band, to the contemporary influence of a full-blown soul sanctified band of musicians.

Although gospel music after 1970 moved further from its traditional roots, Nashboro continued to record groups that modernized only enough to remain relevant but not so much that they lost their zest. Gospel zest is offered aplenty on I Heard the Angels Singing, demonstrating that a label could grow big time and yet remain rooted in holy ground. 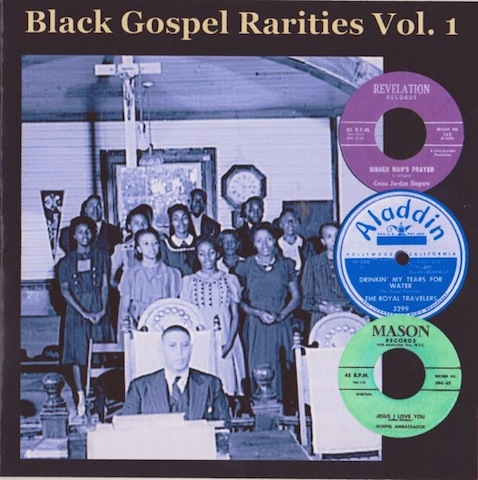 ‘more from the seemingly endless vault of golden era recordings’

Galen Gart’s painstaking research into the 1950s rhythm & blues scene produced the valuable (though sadly out of print) First Pressing series, a Duke/Peacock discography, and other music reference materials. Not limited to the written word, Gart is documenting some of gospel music’s Golden Era singles in his Black Gospel Rarities series of CD reissues.

The volumes shy away from gospel’s top acts, such as the Davis Sisters, Roberta Martin Singers, and the Dixie Hummingbirds, to focus on the lesser known, but sometimes just as effusive, caravan of gospel highway denizens. What the artists collected for this series have in common are their unfettered exuberance. Most of them possess a no-holds-barred Holy Ghost fire in their voices that explodes from the diaphragm with an urgency that commands attention.

From Black Gospel Rarities, Ever-Ready Gospel Singers, ‘One Day When I Was Walking’

Volume One includes selections by some of the series’ hardest singing groups, such as Nashville’s Cross Jordan Singers. The volumes also offer the sophisticated harmonies of the Ever-Ready Singers from their Capitol days (e.g., “One Day When I Was Walking” and “O Mary Don’t You Weep”), the transitional quartet singing of the Royal Travelers (Aladdin), and Gladys Beamon’s intense leads with Chicago’s Little Lucy Smith Singers. Elder White’s emotionally-charged retelling of Jesus’s crucifixion on the Dynamic Gaylarks’ “He Rose” will make your hair stand on end.

Each volume features late 1950s singles by the Gospel Wonders, a Newark-based male group patterned after the flamboyant Alex Bradford Singers. The steel guitar player on their “Only Jesus Can Save” (Scatt) sounds for all the world like Sam Whinham, whose fiery work accompanied the Ward Singers and the Angelic Choir.

Falling in the “pleasant surprise” category are the under-appreciated Joy Rite Singers. Their Federal sides “What About You” and “You Better Mind” evoke the Gospelaires of Dayton, OH, in their propulsive force of motion, thunderous singing, and declamatory lyrics.

As with Gart’s recent Federal Records gospel best-of CD, the Black Gospel Rarities releases were produced from the original 45s and 78s. Despite this limitation, the sound quality of each CD is very good. With the exception of two Gospel Stars tracks on Fortune that are slightly warped, the selections do not even sound pulled from vinyl. The liner notes include personnel and recording session data, but no biographical information on the artists themselves.

Although built with the collector in mind, the Black Gospel Rarities series will also fascinate the mainstream gospel enthusiast who wants to dig deeper into the seemingly endless vault of golden era recordings. 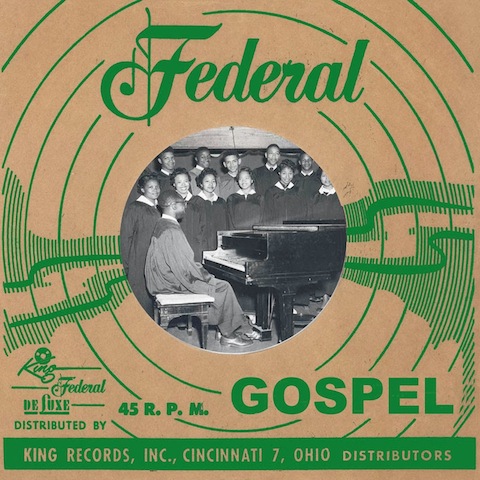 ‘timeless sides from the high-water mark of gospel’s evolution’

THE BEST OF FEDERAL GOSPEL

Available only at www.bim-bam.com (UK)

Nestled in Cincinnati, Ohio, which abuts the border between the North and South, Syd Nathan’s King Records was positioned perfectly to capture the diverse musical palette of post-war America.

That included gospel music, as Galen Gart’s The Best of Federal Gospel reissue CD demonstrates. A subsidiary of King, Federal Records released gospel throughout the 1950s and early 1960s, but Gart focuses the collection on 1950 to 1953, a high-water mark in the music’s evolution. He highlights two strands that made this period especially significant: the transition of the African American quartet sound from sweet jubilee to hard gospel, and the “sister” phenomenon: the emergence of female evangelist recording artists who flourished in the wake of Sister Rosetta Tharpe’s 1940s breakout success. (An overview of the gospel recordings released on the King group of labels, The Best of King Gospel, which includes some of the Federal tracks here, was released in 2005. Containing 24 tracks recorded between 1949 and 1953, it is available as an import item at Amazon.)

Of the former, there are many fine examples, most notably the Four Internes, Federal’s gospel hitmakers of the early 1950s. They emulated the Golden Gate Quartet’s rhythmic singing but added a swinging combo of musicians for greater propulsion. Their big hit, “Count Your Many Blessings,” and nine other tracks are included on the CD.

Other quartets on The Best of Federal Gospel include the L & N Gospel Singers and Florida Soul Stirrers, whose unaccompanied harmonies are indicative of an age when “time, harmony, and articulation” was the main directive. The birdlike tenor notes of the Golden Eagles’ lead on “Anywhere, Anytime” (either Edgar or Ralph Powe) are clearly influenced by the work of the Soul Stirrers’ R.H. Harris.

Sister Bonnie Bradford, a member of the Sallie Martin Singers, is among the female evangelists in the collection. She croons the conversion song, “Jesus Made a Change,” with the sultriness of Savannah Churchill. Gart also includes sides by Thelma Bumpess, a blind evangelist whose Royalettes included a young Shirley Caesar (she takes a solo on “Heavenly Father”). Caesar debuted as a solo artist on Federal; her first two sides, released in 1951 by “Baby Shirley” (for her size, not her age), are included on the set. On “I Know Jesus Will Save,” Caesar mimics Mahalia Jackson’s low tones and vocal phrasing. The Baby Shirley tracks, impossibly rare on vinyl, are alone worth the purchase price.

‘I Know Jesus Will Save,’ The Caravans featuring Shirley Caesar. In her early teens, Ms. Caesar recorded for Federal as Baby Shirley. Her solo version of ‘I Know Jesus Will Save’ is included on The Best of Federal Gospel. In 1956, when she was 18, she accepted an offer from Albertina Walker to join the Caravans and recorded and toured with that legendary group from 1958 until 1966 before embarking on her own legendary solo career.

Although mastered from original 78 rpm discs, the album’s audio quality is superb. The liner notes are slim, but Gart does include recording session details.

After listening to The Best of Federal Gospel, it should come as no surprise that the label introduced to the world the gospel-imbued soul of James Brown and his Famous Flames.

Picks: “I Know Jesus Will Save,” “Anywhere, Anytime.”