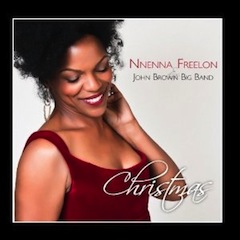 This tasty jazz Christmas offering from Cambridge, Massachusetts, native Nnenna Freelon finds the six-time Grammy nominee (whose artistry extends to producing, arranging and composing) teaming up with Duke University’s jazz program director John Brown and his John Brown Big Band for some lively (and contemplative as well) tours of familiar Yuletide fare while also bringing a Christmas flair to a couple of other usually-non-seasonal tunes. In style and spirit Christmas honors Ella Fitzgerald’s wonderful secular seasonal album with her music director Frank DeVol, Ella Wishes You a Swinging Christmas. This similarity goes beyond John Brown’s terrific swinging arrangements; Ms. Freelon gives precious little ground to the great Ella when it comes to locking in with the band and swinging a lyric just so—coasting behind the rhythm here, right on the beat there, playing around with the time at points to achieve a specific effect (often playful and in the seasonal mood). She even opens the album with “Jingle Bells,” the same song Ella assays as the opening track on Swinging Christmas, except in Ms. Freelon’s hands it is not only retitled “Swing Jingle Bells” but also reimagined at a more temperate pace. Otherwise it boasts the same spirited interplay between the spirited vocal and the complementary, bopping horns; and where Ella cries out “Love that vibration, syncopation of a one-horse open sleigh,” Ms. Freelon marks another distinction of her version by belting out “oh what fun it is to jam in a one-horse open sleigh.” Like’s Ella’s “Jingle Bells,” Nnenna’s “Swing Jingle Bells” is the template for most of what’s yet to come.

“Let It Snow” and Vince Guaraldi’s “Christmas Time is Here” swing in quite different ways: during the former, Ms. Freelon races ahead of the beat, the orchestra catches up and she races ahead again. When they meet, about 25 seconds in, she takes the melody this way as the band gets into a horn-infused groove behind her. Band and singer keep playing their cat-and-mouse game, punctuated by bursts of exclamatory horns, and the end result is a joyous love set in a wintry scene. Their attack on the Guaraldi song is even more interesting and unexpected. Dispensing with the original’s muted, introspective arrangement, they take their version at a brisk pace with a hint of bossa nova in it as pianist Miki Hayama fashions an uptempo homage to Guaraldi’s piano soloing. With the horns belting and blaring, Ms. Freelon soars over it all with a sassy, cornet-like vocal, gives way to a rousing sax solo near the midpoint, interpolates a snippet of “Deck the Halls” into the fracas during a tempo change, then returns to the basic text, taking it home in bright, cheery fashion as the piano and horns get into a bustling set-to behind her. Two other familiar songs provide soothing interludes in the program. A cool soprano sax solo keys a blues-tinged reading of “Little Drummer Boy,” a difficult to song to pull off effectively but newly realized here thanks to an interesting arrangement that isolates not only the soprano sax but also Adonis Rose’s drums and breaks into a swinging gait towards the end, to which Ms. Freelon responds with a clipped, forceful vocal the doesn’t undermine the original’s reverence but in fact evokes a certain urgency of the moment in question. One of the album’s most delightful moments comes in Ms. Freelon’s duet with John Brown on the evergreen “Baby, It’s Cold Outside.” Brown is a wonderful sparring partner, with his warm bass voice and this-short-of-desperate come-ons to his distaff counterpart’s prevarications, all played out over a largely understated piano-bass canvas with a striking interlude in the form of a muscular alto sax solo.

Nnenna Freelon and the John Brown Big Band, ‘I Like the Sunrise,’ written by Duke Ellington and featured on Christmas

The wild cards in the tunestack are two in number. A near six minute “Spiritual Medley” celebrates the birth of Christ with incrementally growing enthusiasm as the production unfolds. “Children Go Where I Send Thee” starts the medley with a deliberate, understated arrangement leaning largely on a gritty vocal-and-percussion arrangement that gathers momentum when Brandon McCune enters on piano and the horns follow him into a brassy “Go Tell It On the Mountain,” at which point a snarling trumpet solo takes over and continues protesting through snippets of “O Little Town of Bethlehem,” “Joy to the World” and “Angels We Have Heard on High” before the singer eases back into “Children Go Where I Send Thee”–and that’s the concept: the stanzas this cumulative song adds are parts of other songs. Duke Ellington’s “I Like Sunrise” is wonderfully arranged by Jay Meacham to accentuate Ms. Freelon’s expressive, forceful vocal with warm, surging horns and Miki Hayama’s tender, meditative piano. And how do you refresh  the venerable “Silent Night”? By making it less a vocal performance and more an occasion for the big band, led by McCune’s flitting, McGriff-like organ solo, to take melody and harmony to some boisterous places unimagined by Franz Xaver Gruber and Joseph Mohr in 1818 when they wrote the song. For that matter, many of the songs on Christmas delight by being unconventional takes on conventional Yuletide fare. It may not be to every traditionalist’s taste, but in the end it’s an optimistic, upbeat, celebratory outpouring of emotion and spirit completely in tune with the season that inspires its approach. 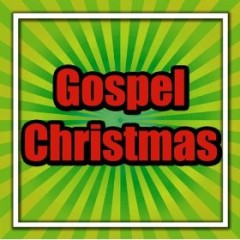