A tiny, mysterious moon orbiting Neptune has been spotted for the first time in more than 20 years since it was discovered by Voyager’s cameras in 1989.

By analyzing photos taken by the Hubble Space Telescope, scientists at the SETI Institute in Mountain View, Calif., have caught sight of Naiad, the innermost of Neptune’s moons. The 62-mile-wide (100 kilometers) moon has remained unseen since the cameras on NASA’s Voyager 2 spacecraft discovered it in 1989.

Scientists recently tracked Naiad across a series of eight archival images taken by Hubble in December 2004 after using a different technique to help cancel out Neptune’s glare. Neptune is 2 million times brighter than Naiad, so Naiad is difficult to see from Earth, SETI officials said.

Dr. Mark Showalter, a senior research scientist at the SETI Institute in Mountain View, California, announced the result on October 8 in Denver, Colorado, at the annual meeting of the Division for Planetary Sciences of the American Astronomical Society.

He and collaborators Dr. Jack Lissauer of the NASA Ames Research Center, Dr. Imke de Pater of UC Berkeley, and Robert French of the SETI Institute, also released a dramatic new image of Neptune’s puzzling rings and ring-arcs, which were first imaged by Voyager. Dr. Showalter and his colleagues wondered if they could find Naiad using a technique that just recently helped them uncovered an even smaller, entirely new Neptunian moon. They overlaid eight Hubble shots from the 2004 search effort to mimic a much longer exposure and reveal features that were otherwise too faint to see. Sure enough, Naiad showed itself.

“Naiad has been an elusive target ever since Voyager left the Neptune system,” said Dr. Showalter. From Earth, Neptune is 2 million times brighter than Naiad, and the two are separated by only one arc second.

“This is equivalent to the width of a human hair from 50 feet away,” said Dr. Lissauer. The team of astronomers needed to develop new techniques to suppress Neptune’s glare. Naiad was finally revealed, moving across a sequence of eight images taken during December 2004.

The work presented on October 8 also revealed that Naiad had been hidden for so long in part because its orbit is very different from what was predicted based on the Voyager data. Dr. Showalter thinks Neptune’s other moons are pushing and pulling on Naiad, making its orbit hard to predict.

“There’s probably some kind of a perturbation going on that is making its orbit kind of wobble,” he says. “Over periods of a decade or so, it speeds up and slows down in a way that is not entirely predictable.” These wobbles could be the first indications that Neptune’s entire moon system is unstable, he adds, although it could take tens of billions of years for the effects to cause catastrophic collisions.

In addition to its moons, Neptune hosts a family of faint rings and ring-arcs. The arcs have been changing slowly in the years since their discovery. Whereas Voyager saw a set of four closely spaced arcs, the leading two arcs have been fading away, and are completely absent from the newest images

The trailing arcs, however, are essentially unchanged. This system of arcs is probably confined by the gravitational effects of the nearby moon Galatea, but the reason for the long-term changes is unknown. Dr. de Pater has also been following the ongoing evolution of the arcs from the 10-meter W. M. Keck telescope in Hawaii.

Showalter and his collaborators had previously announced the discovery of a tiny moon of Neptune in July. That moon, which is no more than 20 km (12 miles) across, goes by the provisional designation “S/2004 N 1”.

The new results are based on further analysis of the same images, which were all obtained by Hubble between 2004 and 2009. Although 100-km Naiad is much larger than the moon announced in July, it orbits much closer to Neptune and so has proven to be much harder to detect.

“It is always exciting to find new results in old data,” Showalter remarked. “We keep discovering new ways to push the limit of what information can be gleaned from Hubble’s vast collection of planetary images.”

Now that the image-stacking technique has gained more ground, Dr. Showalter plans to turn it on other targets, such as Uranus’s missing moon Cordelia, which has only ever been spotted by Voyager 2. “That’s my remaining personal challenge,” he says. “I’m getting close.”

The Sounds of Neptune, from Voyager 1

As captured by Voyager 1 before it left the solar system, the sounds of Neptune, available on the NASA-released CD, Neptune: NASA Voyager Space Sounds

Thanks to NASA’s far-flung Voyager 1 spacecraft, now exploring the final frontier beyond our solar system, humanity can tune into the sounds of interstellar space.

Scientists announced Thursday that Voyager 1 left the solar system in August 2012 after 35 years of spaceflight, making it the first craft ever to reach interstellar space. No other man-made object has ever traveled so far away from its home planet.

To mark the occasion, NASA unveiled the first Voyager 1 recording of the sound of interstellar space, Neptune: NASA Voyager Space Sounds, offering the probe’s strange, otherworldly take on its new frontier. The sounds are produced by the vibration of dense plasma, or ionized gas; they were captured by the probe’s plasma wave instrument, NASA officials wrote in a video description.

“When you hear this recording, please recognize that this is an historic event. It’s the first time that we’ve ever made a recording of sounds in interstellar space,” Don Gurnett, principle investigator for the Voyager plasma wave investigation, said in a news conference.

Voyager II swept past the Neptune system on August 24-25, 1989. Neptune’s atmosphere proved surprisingly active, with wind velocities clocked at over 700 MPH. This dynamic climactic activity is powered by Neptune’s internal heat, which provides over twice as much energy as the feeble sunlight that the planet receives. Neptune has eight moons and three rings, as well as a highly tilted and offset magnetic field.

Neptune’s electromagnetic environment is surprising. It is inclined to the planetary axis by 47 degrees. Periodic pulses of radio energy were also recorded, generated by rotation of the planet’s deep interior. Neptune’s lovely blue color is a result of methane, helium and hydrogen gasses in its atmosphere.

The picture of Neptune on the cover of this CD features the great dark spot, which is accompanied by white clouds that undergo rapid changes in appearance. To the south of the great dark spot is the bright feature that scientist’s nicknamed “scooter.” Still further to the south is the feature called “Dark Spot 2,” which has a bright core.

This Space Recording Series is dedicated to the memory of Fred Scarf, PhD, who developed the acoustic recording project for Voyager and is directly responsible for the sounds you hear on these recordings from space. 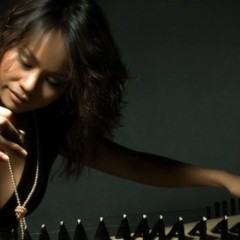