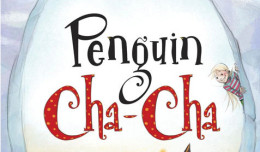 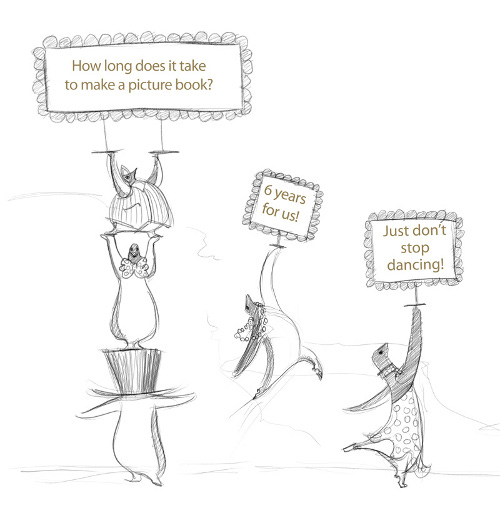 Author/illustrator Kristi Valiant is visiting this morning to elaborate on the point she makes in the above sketch. I love that. Who ever said making a picture book was quick or easy?

Valiant’s newest picture book, which she both wrote and illustrated, is called Penguin Cha-Cha (Random House, August 2013). The Kirkus review calls it a “humorous romp,” while School Library Journal describes it as a “sweet zoo fantasy” and a great one-on-one read, this lively story of a group of dancing penguins at the zoo and one very determined girl, who has caught them in the act.

Let’s get right to Kristi and the art and sketches she’s shared today. I thank her for visiting. 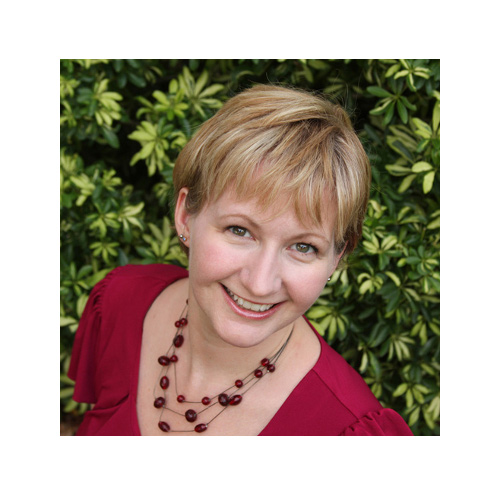 Kristi (pictured above): My penguins began dancing six years ago as a portfolio piece. I drew them on my computer, and the illustration was overly airbrushed and bright in all the wrong ways. I’m too embarrassed to show that particular illustration here, but those of you who are Google-savvy could find it for a laugh.

At the time, I was working on creating illustrations for my portfolio to break into illustrating picture books. It occurred to me that I should illustrate my favorite things. I was in a Latin and swing dance group, called The Fourth Street Alley Cats, and I liked waddling penguins, so voilà! Dancing penguin illustrations! 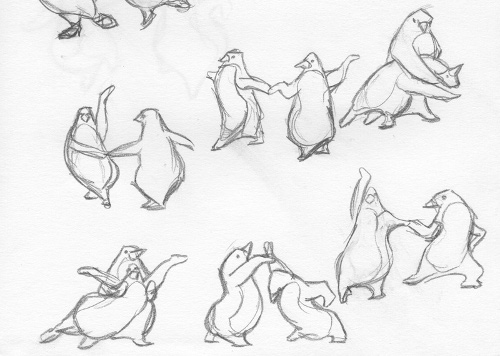 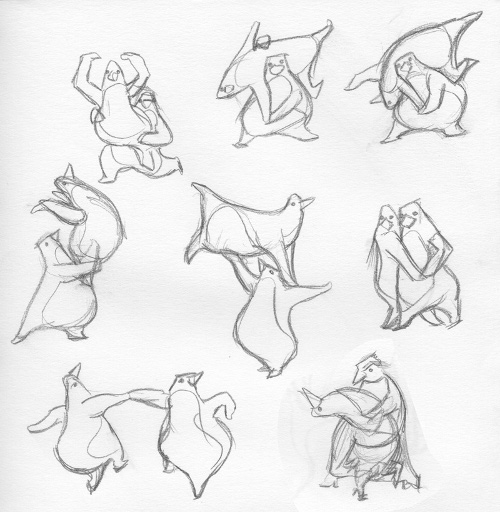 Back then, digital illustration was changing from an obviously-drawn-on-the-computer look to looking more like traditional media. I read Mr. Popper’s Penguins and drew a fun little poster for it as an experiment working with different digital brushes. 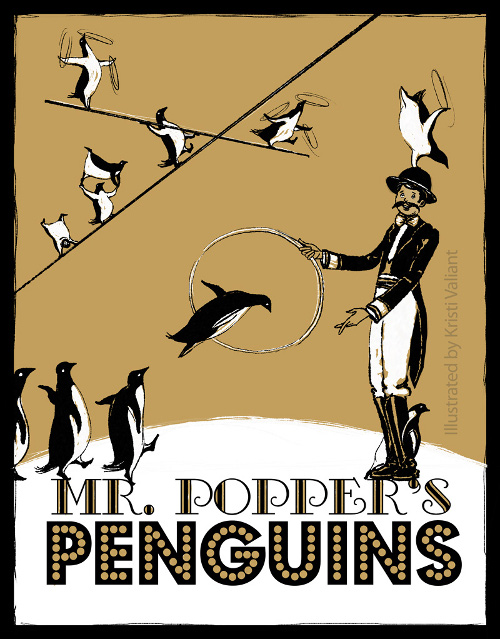 The pencil tool that comes with Photoshop is horrid, so I played around with the Brush Creator to come up with a pencil tool that felt and acted like a real pencil to me. I drew on a Wacom tablet and could set the pencil to get lighter or darker, be more or less transparent, and have more or less texture, depending on how hard I press down with my stylus. It took a while to get used to sketching on the computer, but once I did, I haven’t turned back. Now I use a Cintiq, which is a large monitor that I can draw on with my stylus. 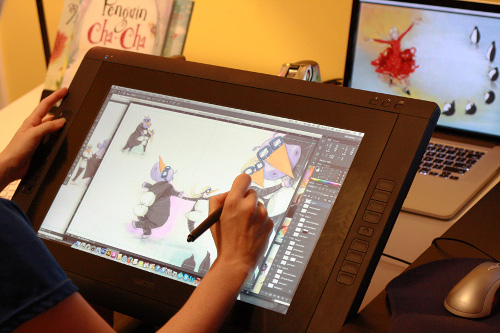 Resizing part of an illustration, changing colors, and moving pieces around is so easy in Photoshop. When I draw in a real sketchbook with a real pencil, I keep trying to hit an undo button.

I was having fun drawing dancing penguins on my computer, and one day a greeting card company asked to license them for wrapping paper. Cha-Cha-Cha! 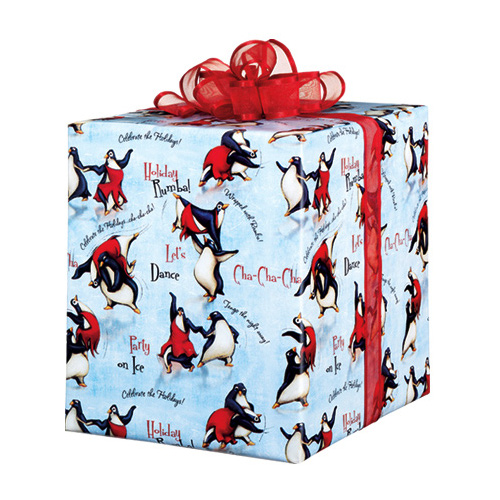 In 2007, an editor looking through my portfolio pointed out how my face lit up when we got to the dancing penguins illustration and asked if I wrote a story about them. That’s when it occurred to me that I should write about my favorite things as well as draw them, so voilà! Dancing penguin manuscripts and dummies!

I wrote story after story and made some into dummies. Some were funny. Others missed the mark. But it seems those people are right who say writing a fantastic, marketable, unique picture book is hard! It is really hard. What helped me most to see my manuscripts in a clear light was sitting down and reading dozens of recently published picture books in one afternoon. I sorted them into piles: 1) Wouldn’t read again/I can barely finish; 2) Okay, I’d read this again; and 3) I need to buy this book! The third category had only a small number, but it helped me to see what types of books I absolutely loved and what I loved about them. I read and studied them. Then I read my own manuscripts. Hoo-boy! My manuscripts didn’t stack up.

As I worked on my writing, I was still developing my art (and always will be). Critiques at SCBWI conferences have been extremely helpful for me. During a critique, one editor mentioned that the way I drew my children was more commercial-looking than the way I drew my penguins. I wanted the styles to match, so I redesigned Julia [below] and got rid of her brother. I also changed the name of my manuscript from Penguin Salsa to Penguin Cha-Cha. Being a lover of Mexican food, I didn’t want anyone to think I was chopping up penguins into salsa.

I took a break from the penguins to illustrate my first hardcover picture book. Yay! It’s a delicious one. Cora Cooks Pancit was written by Dorina K. Lazo Gilmore and published by a multicultural publisher, called Shen’s Books. I love illustrating books by other authors, because I get to step into someone else’s world. For this book I learned about the Filipino culture and made the author’s family recipe for pancit. Yum! Usually, the author and illustrator never meet, but I met Dorina after the book was published, and she’s one of those friendly people you feel like you’ve known forever. Some of the nicest people work in children’s books. 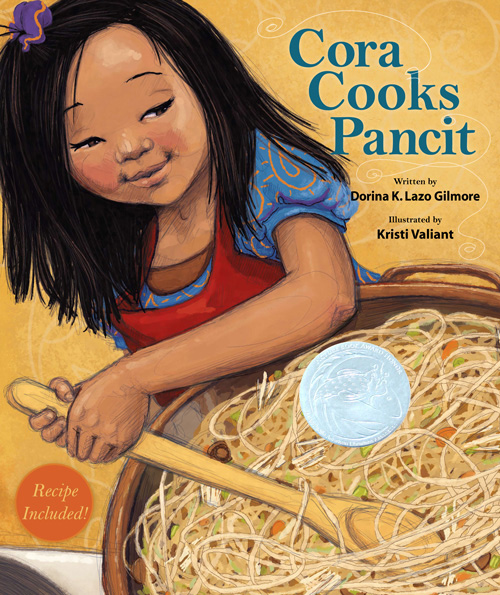 Speaking of the nicest people being in children’s books, I need to mention the author of another book that I illustrated, Janna Matthies, who wrote The Goodbye Cancer Garden. Janna shares her heart and her own experience in her story of a family growing a garden together, as Mom recovers from cancer. It’s a powerful story of healing and hope. And Janna herself is an encouraging woman I admire. I have the pleasure of volunteering with her in our region of SCBWI. 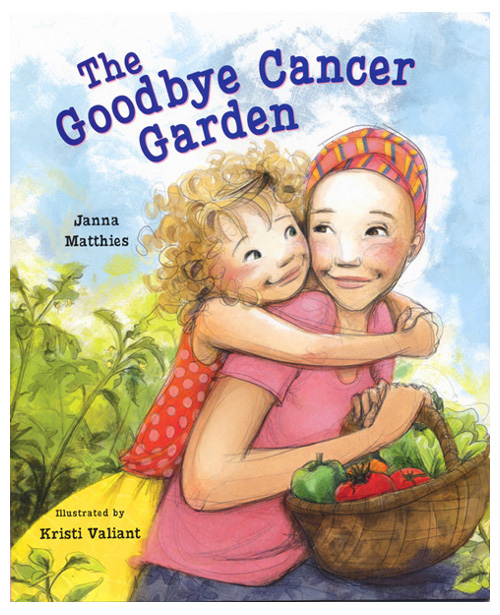 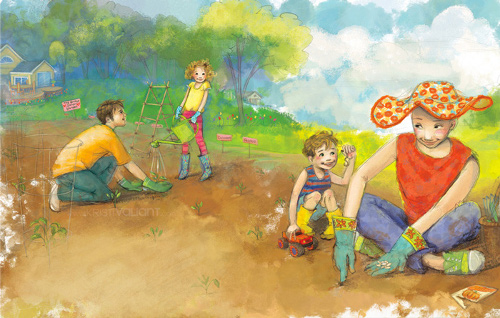 I also illustrated the Little Wings chapter book series by Cecelia Galante for Random House. [These books are] about a funny, curly-haired cupid, named Willa Bean. Book 5 in that series just came out. 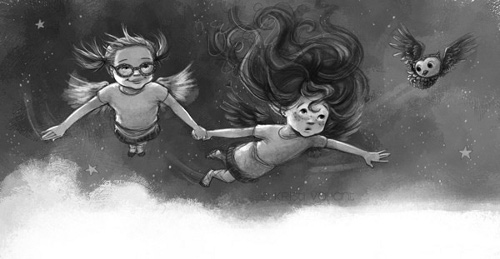 I kept coming back to my dancing penguins in between and decided to start the agent hunt in 2011. I met Linda Pratt at a dessert party during an SCBWI conference. I had sought her out when I felt I was finally ready for an agent, because I really liked her clients and thought we may have a bit of the same taste, so perhaps she’d like my work. She had just seen my artwork on display for winning the illustration contest at the conference and commented on it. We had a great chat and she invited me to submit.

The dummy I had submitted was, of course, Penguin Cha-Cha. At the exact same time I was submitting to her, an editor from Random House came to my website, saw an illustration of my dancing penguins with the line “From my WIP dummy,” and asked me to submit the dummy to him. How often do editors come knocking for manuscripts? I was thrilled when Linda became my agent just as Random House asked to acquire the dummy. What beautiful timing! I’m sure I had help from above to orchestrate that. 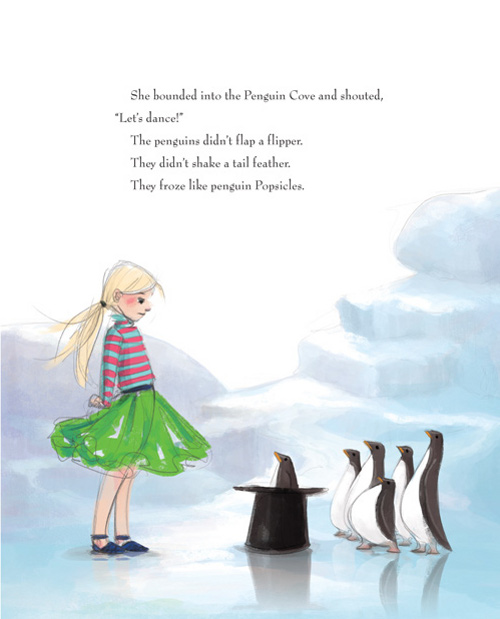 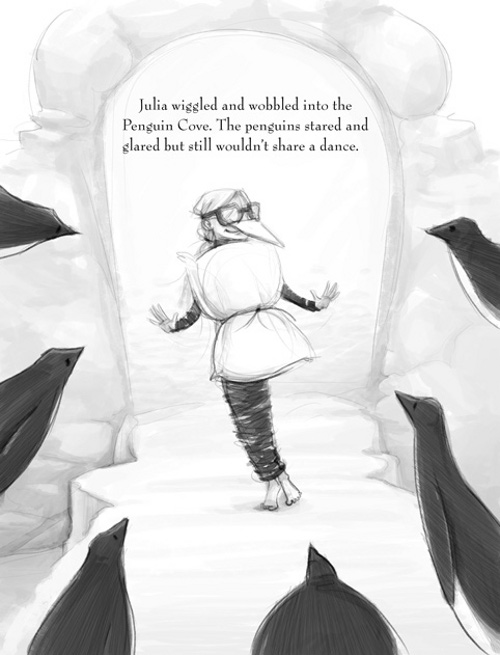 My illustrations and text didn’t change very much from my submission to the final book. The final text ended up with about twenty more words than the dummy I submitted, but the plot, structure, and most of the layouts stayed the same. Most of revising and re-working happened in the years before it was acquired. Even though it took a while for my penguins to dance onto a bookshelf, I love the process of creating books and reading loads of wonderful picture books out there as I research (which is far more play than research).

I have a much better grasp on digital illustrating than when I first drew dancing penguins six years ago, but digital illustration has come a long way in that time, too. Some of my editors and art directors don’t realize that I illustrate everything on my computer until I tell them.

They danced with Julia all day long!”

Penguin Cha-Cha just launched at the end of August. What a giddy day! The celebratory chocolate played its part to encourage giddiness, too. Let’s dance! 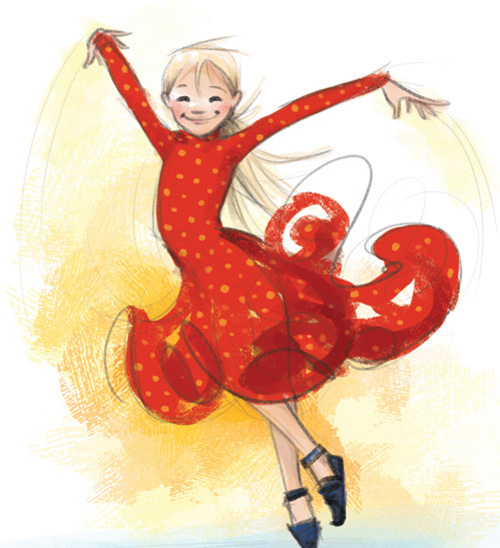 My mom made this little penguin studio mate for me. Isn’t he dashing? 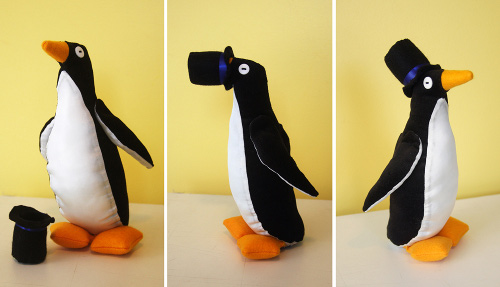 Thanks again to Kristi for visiting. There’s a bit more art in the book’s trailer:

This and many more of Jules’s adventures in books, kids’ lit and illustration can be found at her acclaimed blog, Seven Impossible Things Before Breakfast, where the above interview was published on September 11, 2013.