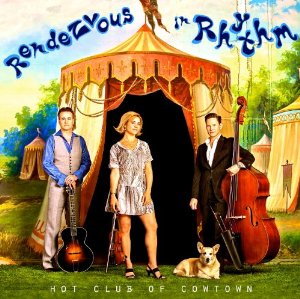 The Hot Club of Cowtown (left) and the Hot Club of San Francisco: raising the temperature on two new albums while working similar turf.

Beyond a mutual affection for the music of Django Reinhardt and Stephane Grappelli, and gypsy jazz in general, the Hot Clubs in question here–one hailing from San Francisco, the other from the cowtown of Austin–usually go their separate ways when it comes to making albums. The San Francisco group has an unabashed love for le jazz hot, and has made that style the cornerstone of its musical identity, whereas the other Hot Club has often emphasized the “Cowtown” part of its name by being as much about western swing a la Bob Wills & the Texas Playboys (in fact, when last we heard from the HCOC it was via 2011’s wonderful tribute to the King of Western Swing, What Makes Bob Holler, the subject of a feature in the March 2011 edition of TheBluegrassSpecial.com) as it is about gypsy jazz.

With their new albums, the two Hot Clubs finally occupy the same turf: the HCOC’s Rendezvous in Rhythm, the trio’s first full-on salute to the gypsy jazz and hot swing of Django-era Paris, showcases  the band’s distinctive approach to 14 tunes associated with the artists and era under consideration on their disc. The HCOSF, founded in 1990 by Paul Mehling, former lead guitarist for Dan Hicks’s Acoustic Warriors, is represented by a new live album, the second in its dozen-strong album catalogue, Live at Yoshi’s, recorded in the band’s home town by the Bay and blending Django-associated tunes with standards from the Great American Songbook. If you’re looking for a clear victor here, there is none: this is strictly pick ‘em time. You can’t go wrong with either album, and the smart money is on buying both.

At the Back Yard Jazz Concert in Santa Rosa, CA, August 19, 2012, the Hot Club of San Francisco performs ‘Gone With the Wind,’ with Isabelle Fontaine on lead vocal. The tune is also included on the band’s new album, Live at Yoshi’s.

At six players strong, San Fran’s Hot Club has a tight, full sound, a lineup of splendid instrumentalists and a charming vocalist in Isabelle Fontaine. Her coquettish “I Love Paris,” featuring a fine, spirited violin solo by Even Price and a frisky guitar solo from Mehling, is a moment when all of the band’s strength converge in a feel-good moment. She can knock a swing tune out of the park too, as she demonstrates in lively fashion on the band’s energizing sprint through the Peter de Rose-Carl Sigman evergreen, “Buona Sera,” again driven by Price’s violin but also showcasing a wild, growling trombone sortie by Clint “Wiki” Baker. And in one of the album’s few subdued moments, she gives the tender, affecting touch to a lovely rendition of Henri Salvador’s “Syracuse,” which is equally notable for an exquisitely beautiful, meditative violin solo courtesy Price. And as a change of pace, the band signs off its set by bringing on Sam Pocha to add some fanciful tuba rumbles to an arrangement of “Milord,” one of the great Piaf’s signature songs, that spotlights not only Ms. Fontaine’s sunny, engaging vocal but also a cool, bluesy guitar solo from Mehling. The instrumentals are no less captivating–zipping through a rousing take on “Songe d’automne” behind Price’s dynamic, driving violin; a nice, multi-textured take on Django’s “Dinette,” fueled by the warm guitar-violin dialogue between Mehling and Price; and the set opener, a terrific romp through the Reinhardt-Grappelli co-write, “R-26,” in which Mehling, Price and Baker (on string bass) get the set off to a high-energy start that leads almost without pause into an intense take on Cole Porter’s “It’s All Right With Me” that introduces Ms. Fontaine’s first vocal, a sturdy flight graced by a smidgen of attitude from the singer. Though this is a live album, the audience applause is mixed low, and the only room feel comes from the energy the band itself exudes in a mix otherwise rich and full on all instruments–practically studio quality, in fact, on a night when Yoshi’s was clearly the place to be on the night in question.

Being a trio–Whit Smith, guitar: Jake Irwin, bass; Elana James, fiddle–the Hot Club of Cowtown doesn’t have as many weapons in its arsenal as do their San Francisco counterparts, but when it comes to making the most of what they’ve got, HCOC is hard to beat. They make this abundantly clear on the first number, “Dark Eyes/’Ochi Chornye’”–a red-hot instrumental version of a song written by Ukrainian poet and author Yevhen Hrebinka, first published in 1843, and recorded by Django no less than three times under the French title “Les yeux noirs.” So much for the history. This cut is dazzling in all its components as it builds inexorably to a frantic pace slightly before the halfway mark. Smith starts it with a fleet series of runs on the guitar as the tension builds; James comes in with a high-pitched chirping, hummingbird-like sound on the fiddle that doesn’t sound like it could have been produced by anything but a machine; after her virtuoso display of texture and tone, in comes Irwin with a delirious, dizzying solo, the wildest clicking and clacking you can imagine being produced on the instrument. From this heated start the band cools it down immediately, easing into a lilting rendition of the Jimmy McHugh-Dorothy Fields chestnut, “I’m in the Mood for Love,” rendered warm and tender by Smith with the atmospheric backing of Ms. James’s soothing fiddle. In addition to her fiddling prowess, Ms. James is a most affecting vocalist with an assured, seductive swoon and a generally sunny demeanor that makes Irving Berlin’s “If I Had You” seem even more optimistic than the master may have imagined it to be. Her approach gives added lift to otherwise mostly instrumental workouts on “Slow Boat to China” and “Back In Your Own Backyard,” the latter being the Billy Rose-Al Jolson memo about finding your heart’s desire close to home, a sentiment Ms. James delivers with a counselor’s empathy and then follows with a tasty fiddle punctuation. The group’s uptempo arrangement of “Melancholy Baby” finds Ms. James singing a bright lead and adding a crooning fiddle solo that in turn sets up another robust guitar sortie from Smith. In fact, Rendezvous in Rhythm doesn’t explore dark backwaters of the soul; it’s brimming with positive energy in the swinging arrangements, whether those be laid-back or aggressive, and in Ms. James’s flirtatious vocalizing. As a bookend to the album opening “Dark Eyes/’Ochi Chornye,’” the Cowtowners close the proceedings with Django’s iconic gypsy anthem, “Douce Ambiance,” giving each member another spotlight solo turn, altogether more measured than the earlier cut’s barnburning pace, and then call it a day on another Hot Club triumph. The band’s next communiqué cannot come too soon. 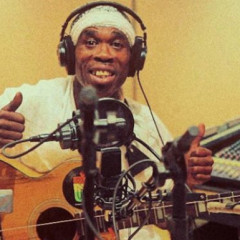