Chris Leigh wouldn’t be the first hard-core country artist to attribute a burst of inspiration to a wrecked marriage but he may be the latest. His impressive, bare-knuckled debut, Broken Hearted Friends, is, by his own admission, a direct result of his wife dumping him and thus prompting him to start writing his way out of despair. Following a failed attempt to crack the music business in California, Leigh returned to his native Kentury to work as a salesman in order to support his family. Then the marriage went south, in a manner of speaking, and Leigh sought solace in music.

No one should exult in a relationship dying, but in Leigh’s case this cataclysmic event’s fallout is a 10-pack of fine, serrated-edge country and honky tonk songs that Leigh puts over with a swagger and a wink, sounding at times like Johnny Paycheck, sometimes like Mark Collie, but ultimately just like himself, a baritone with personality. And though the backdrop of Broken Hearted Friends is a sad story indeed, give Leigh credit for not losing his sense of humor: in full Paycheck howl, he saunters through “Money,” a honky tonk grinder in which his distaff partner is likened to cold, hard cash that went as quickly as it came: with producer Jim “Moose” Brown tinkling the 88s and Scotty Sanders weeping on dobro, Leigh lets out with a stage cry in declaring, “Money liked to spread herself around, every time that we’d go out dancin’ all over town/but in the morning she always made me want to cry/‘cause my money she done run off with another guy…” And so forth. The title track kicks off the album in wry fashion, as Leigh growls over a honky tonk thump, “I don’t know what made her mad/she’s screamin’ something about me and her dad/and all men are useless and she’s drowned in tears/guess I don’t understand her at all/she’s got something against football/she broke my remote and poured out all of my beers and that ain’t right…” On “Who’s That,” a brisk country shuffle punctuated by Sanders’s pedal steel flurries and Sanders’s high-spirited piano, Leigh affects a winning, mock-confused posture in wondering about a “Facebook Romeo” and other suspicious males circling around his gal. “Do you think I got no sense,” he moans, “and don’t you know that emails are just like fingerprints” in referencing that most thoroughly modern version of the telltale heart. What’s a fella to do?

Chris Leigh and the Broken Hearts, ‘Who’s That,’ a live version from the band’s debut album, Broken Hearted Friends

Maybe what he does is reaffirm his deep and enduring love, as Leigh does in “Like I Love You Forever,” a sprightly avowal goosed along by Troy Lancaster’s stinging guitar and memorable for an impossibly catchy ascending chorus, smoothly harmonized and emphatically delivered: “I’m gonna love you forever…

It would be easy to joke that Leigh’s characters spend too much time looking for love in all the wrong places—“Who’s That” and the boozy lament “If You Make It To Heaven” have mise-en-scenes in bars and strips clubs, respectively—but then you sense the depth of his loss in the turbulent emotions of “Broken Inside” (which is listed as “The Ballad of Bobbie Sue” in the liner booklet). Rising from guitar-and-vocal solemnity to a roiling mix of searing electric guitar, pedal steel and crashing drums, this epic tale concerns a homecoming queen from “a family of means” and the singer, “a nobody king, going nowhere.” Deeply unhappy with her lot in life—“she said she’s livin’ her mother’s dreams…but behind all her pride/I saw a teardrop in her eyes/guess there’s some things that money just can’t buy/when you’re broken inside”—and the boy too shy to offer her comfort, they part. Years pass before they meet again, by which time he’s a gas station attendant and she’s married into wealth and “livin’ the dream, livin’ the dream,” with the tear in her eye giving her away again as surely as it did in their younger days. Following a last pronouncement of “there’s some things money can’t buy,” Leigh repeats “when you’re broken inside” as an incantation, as if that phrase had the power of revelation.

So what becomes of the broken hearted? Check in with Chris Leigh for one perspective. And here’s hoping he doesn’t have to endure such personal trauma for the next long player. On the other hand, if you get songs like this out of it and can put them across this credibly… 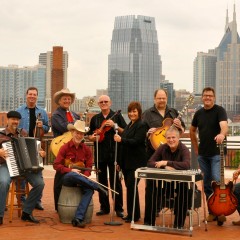