Nobody gets cheated on All Miller’s long-awaited …In Between Time Chicago blues extravaganza: the 17-song disc contains a bit more than an hour of music, the band of stellar Chi-town blues players is at the top of its game, and Miller’s engaging personality infuses the proceedings with the necessary energy and sense of purpose to make these performances memorable. If you’ve ever had a night in a blues club being entertained by a bunch of fine players expertly navigating the music’s emotional terrain, locked into each other and having a swingin’ good time making music en masse, then dig …In Between Time, where the aforementioned happens with satisfying regularity.

The backstory here is that Miller put these sessions together over the course of two sessions more than a year apart, on April 25-26, 1999 and on May 6, 2000. He self-released the ensuing disc, which had long since fallen out of print and into obscurity until Delmark brought it back to life. Although a guitar player himself, Miller enlisted the help of three ace guitarists for this project, namely John Primer (who also handled vocals on three cuts), a sizzling Billy Flynn and Dave Spector. His drummers were no slouches, either, being Willie “Big Eyes” Smith and his son Kenny; and on piano he employed a pair of 88 masters in Barrelhouse Chuckl and Key Saydak. Harlan Terson handled most of the bass duties, and drummer Mike Schlick was on board for a trio of Smith-less cuts. Miller supplied some winning original songs of his for the tunestack, then rounded out the repertoire with tasty morsels from the likes of Jimmy McCracklin, Elmore James, B.B. King, Willie Dixon, Percy Mayfield, et al. The resulting album marked Miller’s return to the active list after being sidelined by health issues following the release of his highly regarded 1995 Delmark debut, Wild Cards. It didn’t quite pan out that way, but it remains a triumph. Miller, who numbered himself among the first wave of young white blues artists who had migrated to Chicago in the early ‘60s—Musselwhite, Butterfield, Bishop, Bloomfield—had lost none of the spirit that informed his playing in the early days any more than he had lost his love of the blues, Chicago-style, or of the Windy City itself, hence a Chicago trilogy of tunes in which the weather plays a major literal and metaphorical role.

AUDIO CLIP: From the Chicago trilogy on …In Between Time, ‘A Better Day’

In an album with so many highlights it’s hard to know where to start in appraising the many wonders here. But check out the brisk shuffle of “A Better Day,” a sparkling entry in Miller’s Chicago trilogy featuring Flynn crafting a clever, discursive wah-wah solo supporting Miller’s grittiest vocal on the record, which finds our man affecting a soulful, Delbert McClinton-like strut as he celebrates the good vibes he feels simply being in Chicago. For a change of pace, consider his “Old Friends,” with its infectious “Tee Nah Nah” Cajun groove, Saydak’s lively right-hand workout on the piano, tasty guitar soloing courtesy Flynn and Spector, and Miller’s own nasty, honking harp, all of which serve to bolster his invite to a female friend for a friendly reunion with wine and chicken at his place—who could resist? Flynn’s stinging, howling lead guitar sets the pace for another of Miller’s Chicago-centric blues, the raw, terse “Lake Michigan Waters,” a seriously downcast blues set against a “grey and gloomy” winter backdrop that mirrors the singer’s lament for all he’s lost–“my sister, my wife and my mother.” Saydak has a memorable ruminative piano solo here, but nothing so eloquently evokes the protagonist’s desolate condition as Miller’s anguished harp before it gives way at the end to Flynn’s searing, piercing guitar shrieks. With Primer taking a strong, shouting lead vocal the band and teaming with Spector on some tasty guitar work, the band takes a lively march through B.B. King’s 1957 RPM track, “I Need You So Bad”; Primer comes back for an amusingly distraught lead vocal on Elmore James’s “1839” (“I ain’t seen my baby since 1839”), a slow blues fueled by Saydak’s atmospheric piano and Miller’s shimmering, aching harp soloing ahead of Primer’s broken-hearted guitar. With Rob Waters on organ and Barrelhouse Chuck on piano, Miller works out a grinding, deep blues take on Mayfield’s forlorn “Bachelor Blues,” the title alone being a dead giveaway as to the song’s content, to which Miller does justice with his bereft vocal musings (“I had love at one time/but I can’t find love no more…”) on this lesser-known Mayfield gem.

AUDIO CLIP: From Al Miller’s Chicago trilogy on …In Between Time, ‘Blizzard’

In many respects the most interesting track here is the album’s sign-off, the third of Miller’s “Chicago” opus, “Blizzard.” With Flynn on a heavily reverbed lead guitar, a busy rhythm section of Harlan Terson and Kenny Smith, Saydak on electric piano and Miller on a husky lead vocal and playing guitar, “Blizzard” is a stomping, thudding track with a weighty Cream-Hendrix feel in the sonic attack and Miller sounding reminiscent of Cream-era Jack Bruce. On the surface the song is, vividly, about coping with the panic ensuing from the record blizzard of New Year’s 1999, which killed 73 and dumped more than 21 inches of snow on Chicago. But in survival mode, Miller, we learn, is in the midst of a dark night: “Just like a fisherman fishin’ for his soul/maybe I’m out there trying to find my own way to go/in the streets of Chicago in ’99…who’s in trouble, people get outta my way/I’m so lost in the streets of Chicago today.” Like the snow that paralyzed Chicago for three days in that new year, the blizzard Miller describes also becomes a metaphor for the paralysis of his own soul, the difference being that he offers no hope for digging out of the latter. In the end the track’s sludgy sound becomes a death knell.

Bravo to Delmark for bringing …In Between Time back into print. It’s about time, yes, and if Al Miller is sitting on any more “Blizzard”s, it’s about time we hear those too. 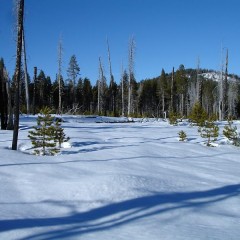