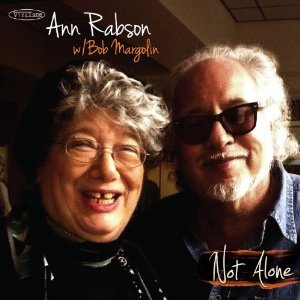 Two veterans aging gracefully in the blues field get together with their voices, their instruments and a general aim to honor the late, great piano master Pinetop Perkins, and proceed to make a thoroughly delightful album of easygoing, wise, witty and warm performances. Ann Rabson, a stellar blues pianist-vocalist who is best known for her 25 years as a member of the all-female blues ensemble Saffire—The Uppity Blues Women, and that ever-reliable steady-rollin’ man, Bob Margolin, ace guitarist who broke in with Muddy Waters, have done exactly that on Not Alone, a long player that sounds right just about any hour of the day you cue it up.

Saffire—the Uppity Blues Women on their farewell tour in 2009, performing Ann Rabson’s ‘He Makes It Hard for Me to Sing the Blues’ at The Yale in Vancouver. In addition to Rabson on piano, the group includes Andra Faye on mandolin and Gaye Adegbalola on guitar.

Though Pinetop trademarked several of the songs on Not Alone, Rabson and Margolin tackle them in their own style, an approach Pinetop would have appreciated. Rabson begins her liner notes by observing, “People who don’t know better imagine the blues is always sad, but that’s not true.” She goes on to point out the various types of blues (“happy, nasty, good-time blues that make you feel good, and sad blues that make you feel like you’re not alone”) but emphasizes that within this framework “there’s a whole pantheon of subjects for the blues.” Blues fans know the music engages the whole of human experience, not merely a dark corner of it, and on this outing Rabson and Margolin underscore the rich diversity of ideas the blues explores. Self-worth and personal accountability are explicitly counseled in the Rev. Thomas A. Dorsey’s stout, gospel-rooted blues, “I’m going To Live the Life I Sing About,” with Rabson delivering a confident, no-nonsense vocal and Margolin adding a fat-toned, concise solo along the way. When love is good it’s very good, and the jaunty “Anywhere You Go” says a lot about the proper depth of a commitment, a message delivered in Rabson’s direct vocal, her rollicking piano and in Margolin’s feisty guitar solo. On the other hand, when love goes sour, there are other depths to plumb, and Percy Mayfield, the Poet of the Blues, knew how to do that better than anyone. Rabson and Margolin sign off with a funereal take on Mayfield’s “River’s Invitation,” a dark, tortured suicidal dialogue between a forlorn soul and the water that’s beckoning him to “come and spend your life with me.” The piano, stark and despairing, reflects the hopeless state Margolin’s thick, Mayfield-like drawl of a vocal reveals in every resigned phrase.

From Not Alone, Ann Rabson and Bob Margolin work out on Roy Bookbinder’s ‘Anywhere You Go’

On the brighter side, Rabson strikes the appropriate skeptical notes on a lowdown treatment of Louis Jordan’s “Is You Is Or Is You Ain’t My Baby,” and edges into ragtime territory on the sprightly come-on, “Let’s Get Drunk and Truck” (clearly the PG version of this Tampa Red chestnut), a delightful piano-and-vocal workout. Margolin adds his own Latin-inflected groover in “Let It Go,” a bit of common sense advice about not dwelling on things you can’t control—like aging—because “you can’t make it better but you sure can make it worse.” Add in, among others, a brisk stomp through Louis Jordan’s “Caledonia” and a restrained but anguished reading of Leroy Carr’s classic evocation of a tortured soul in “How Long Blues,” with both Rabson and Margolin contributing downcast, affecting vocals, and the end result is a whole greater than the sum of its parts. Apart from the inspired musicianship, the songs here are infused with the partners’ real-world understanding of the texts–they’ve lived long enough to know the truth of what they’re singing, and that honesty informs each moment of Not Alone. Kind of makes you wonder if the album title isn’t really a message to those poor souls adrift on their own out there.