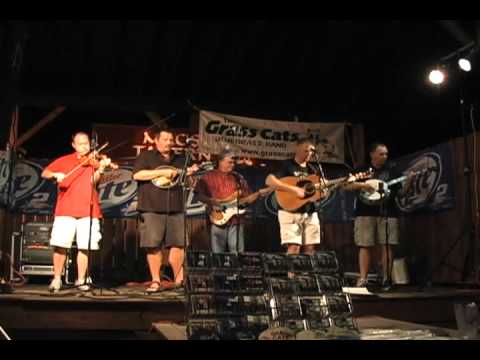 THE MOUNTAINS MY BABY AND ME

Since making their recording debut in 1999, North Carolina’s Grass Cats have become accustomed to their albums residing in the top 10 of bluegrass charts; with their newest, The Mountains My Baby And Me, they may well find their efforts climbing as high as is possible on those charts. And if there’s any justice in this world, the title track, which kicks off the album on a deeply harmonized, high-spirited note, will follow the title track of 2009’s A Good Way To Get The Blues and “Bluegrass Man” from 2002’s The Blues Are Back In Town to the top of the bluegrass singles chart. With Russell Johnson taking the exuberant lead vocal on his self-penned musings on sharing the joys of mountain life with the gal of his dreams the band kicks into high gear behind Rick Lafleur’s rolling banjo and Chris Hill’s keening fiddle (with Johnson himself adding tasty mandolin fills en route). It’s a good way to serve notice that the Cats are operating at full strength, which means what’s coming is going to be something special indeed. And so it is.

From 2007’s Home to Carolina album, the Grass Cats perform ‘Pill or Portion,’ a #2 single on the Bluegrass Unlimited national chart.

In Lafleur, Hill, bassist Tim Woodall, guitarist Alan Mullen and mandolinist Russell Johnson the Cats boast as fine an instrumental lineup as any in bluegrass; Johnson’s powerful singing and superb songwriting comprise the value-added element that warrant the band being considered in the elite category. He’s at his best plumbing the mysteries and lauding the virtues of relationships: though it charges ahead at a brisk pace, fueled by Lafleur’s banjo, his “Off and Gone” is a perplexed man’s plaintive admission of cluelessness in the face of his partner taking an unannounced powder—you can hardly imagine a singer better expressing bewilderment than Johnson does here; on the other hand, the gently swinging “Love With a Lifetime Guarantee” is a witty account of him wooing a reluctant paramour (reluctant because she knows about his track record of loving and leaving), and the song’s bright bounce (plus a series of cool stop-time passages in the chorus and Hill’s infectious fiddling) suggest a happy ending is at hand; another barnburner, “Prison of Your Love,” a ferocious track driven by Lafleur’s breakneck banjo, with tasty punctuation added by Mullen’s dobro and Hill’s fiddling, features a rousing Johnson vocal confessing not merely an undying love for his significant other but undying love of the most heated variety.

Johnson is equally effective, and affecting, a writer when addressing other subjects: he’s penned two beautiful gospel numbers for this outing, one being a smooth gospel quartet salvation song, “Meet Me Up In Heaven,” with a moving, succinct confession of his conversion (“He came to me that day/And He’s been with me all the way/Never looked back to the life I lived before/No more sorrow do I know/since Jesus saved my soul…”), which he underscores with a swift, pointed mandolin solo that sets up another reverent, close-harmonized verse; the classic traditional bluegrass-styled “Turning Point,” centers on a troubled man facing a decisive choice of continuing to drink his life away or to “turn to the Bible” and “have eternal life.” As with “Meet Me Up In Heaven,” the Cats approach this story with reverence but also with gripping depth of feeling born of the crisis Johnson limns in his lyrics—you hear this in Johnson’s keening vocals and terse mandolin runs as well as in the quintet’s soaring mountain harmonies, as Hill fashions a contrasting fiddle solo evoking the somber, humbling moment the protagonist is facing. With Gary Whitt, Johnson co-wrote a chilling treatise on a timeless and timely topic—the dead-end, deadly life of a coal miner—in “Life In the Mines,” a dark, malevolent howl of the abiding danger miners confront every day, with an understated, sardonic postscript to each litany of horrors: “Oh, life down in the mines is so unkind,” an aphorism lent more than a bit of a chill by the funereal pace of the music, led by Hill’s elegiac fiddling and Lafleur’s mournful, spare banjo.

The Grass Cats cover ‘I Shot the Sheriff’ at Mac’s Tavern, Cary, NC, September 2010. On The Mountains My Baby And Me the band covers another Clapton hit, ‘I Can’t Stand It.’

Otherwise, the fellows surprises again with unexpected cover choices. The Grass Cats are far from being the first bluegrass band to tackle songs you wouldn’t expect to encounter on a bluegrass album, but the clever Cats kick it up a notch this time. Maybe someone else has interpreted Dylan’s “Blowin’ In the Wind” at a brisk pace comparable to the Cats’, but probably not with the same mountain flavor as provided by Hill’s fiddle, Lafleur’s banjo and Johnson’s mandolin, or with the degree of galvanizing intensity Johnson delivers in his urgent lyric readings, keening and imploring as they are, or the soaring group harmony in the familiar chorus, now remade with a dollop of gospel fervor. Another delight immediately precedes “Blowin’ In the Wind” in a strutting bluegrass treatment of John and Johanna Hall’s warm pop love song “What You Do To Me,” originally a hit in 1983 for the Beach Boys’ Carl Wilson in a New Wave-ish treatment (with burbling keyboards) on his Youngblood album. Wilson’s terrific single has aged well despite its trendy touches, but the Cats’ rustic, banjo-centric arrangement conjures intimate, fireplace warmth designed to bolster the sincerity of the Halls’ affectionate lyrics. Another ‘80s pop hit, Eric Clapton’s biting “I Can’t Stand It,” a top 10 single from Slowhand’s Another Ticket (1981) album, is reconfigured with fiddle, banjo and dobro supporting Johnson’s seething vocal in a driving bluegrass arrangement incorporating the vehemence of Clapton’s version into the slow boiling fury at the foundation of this version. (This is the second top-notch Clapton cover in the band’s history, following a fine run at “I Shot the Sheriff” on 2009’s A Good Way To Get The Blues album.) And of all the Bruce Springsteen songs seemingly well suited for bluegrass iterations, “Hungry Heart” might be the last one to spring to mind, but the Cats tackle it with a buoyant uptempo strut sparked by Lafleur’s banjo and a straightforward Johnson lead vocal in a terse 2:27 rendering far less contrived, if truth be told, than the Boss’s hit. Like some other celebrated musical Cats, these Grass Cats play clean as country water and wild as mountain dew. On The Mountains My Baby And Me they play it better than ever.