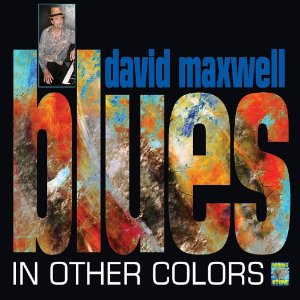 BLUES IN OTHER COLORS

In a fruitful, celebrated and much-honored career (he counts a Grammy for 1996’s James Cotton album Deep In the Blue among his multiple blues-related awards) that dates on record all the way back to 1970, blues pianist David Maxwell has arguably hit his high note with his inspired new release, the all-instrumental Blues In Other Colors. That’s saying a lot because this is an artist whose recording resume includes work with Hubert Sumlin, Freddie King, Joe Louis Walker, Louisiana Red, Luther “Guitar Junior” Johnson, James Cotton, John Primer, Bob Margolin, Jimmy Rogers, Ronnie Earl, Eddie Kirkland, the Lone Pine Western Swing Band (yes!) and, and…whew! A long list of others whose music you would want to hear. This is not the place to argue that he is our greatest living blues piano player, but Maxwell is comfortably ensconced in the top tier of his field and instrument, and with Blues In Other Colors he’s throwing down the gauntlet, challenging other blues players to be similarly inventive in exploring the music’s deepest sources in the Old World. He’s doing it with all original songs blending aspects of traditional post-war urban blues with instruments and melodies found in the traditional music of other western and eastern cultures.

To get an idea of the scope and scale of this project, look no further than Maxwell’s own liner notes. Blues in Other Colors, he writes, “represents a snapshot of the melding of traditional blues with music from other countries to which I’ve been drawn. There is a ‘blues’ sensibility in the vocal and instrumental folk and classical music from many places around the world. For instance, one can ‘feel the blues’ in some of the traditional music of Spain (flamenco), Northern and Western Africa, many countries in what is referred to as the Near and Middle East, as well as parts of Asia, India and Japan.”

The album came together, he adds, “when I approached Harry Manx from British Columbia about doing a project together. He was touring in the Northeastern U.S. and we arranged some studio time. Harry is a stellar singer and songwriter with award winning CDs, who plays, among other instruments, the Mohan Veena, a kind of hybrid guitar/sitar. I fleshed out a few arrangements and called up some friends who live in the Boston area, too. So, we have an out and raita player from Morocco (Boujmaa Razgui), a Turkish ney player (Fred Stubbs), a master percussionist of West African and Indian styles (Jerry Leake), an inventive blues guitarist who is a regular member of my blues band (Troy Gonyea), a drummer (Eric Rosenthal) and a bass player (Marty Ballou), with whom I’ve played many gigs from blues, jazz and beyond. Paul Kochanski (electric bass) and Andy Plaisted (additional percussion) completed the picture.”

The result of all this musical miscegenation is a truly cool album–cool, that is, in the sense that the players take their time to be thoughtful in their dialogues and to listen to each other, which results in an soothing, seamless flow of sounds and textures that speak of one world of music. What could be more appropriate for a time when inclusiveness is so much a part of this country’s discussion about the color, if you will, and character of its society going forward? This very message is inherent in the subtext of Blues in Other Colors. David Maxwell and his friends are up to some important business here, conveying in a most subtle way a rich truth about the world we live in. Didactic, yes; heavy-handed, hardly. Baby, this stuff is cool, remember?

The Maximum Blues All Stars with David Maxwell on piano, Troy Gonyea on guitar, at a Boston Blues Society event at Smokey Joe’s BBQ, July 30, 2010

“Blue Dream” is one of the highlights here. Beginning with a successive swirl of sitar, the droning cry of the double-reed Moroccan raita, the hollow, percolating sound of West African percussion, with Eric Rosenthal’s soft, brush drums supplying a steady pulse, Maxwell, on Wurlitzer electric piano, plays a delicate, quiet, repeating figure, music-box like, ahead of Manx entering with a keening, slide-like moan on the Mohan Vina that evolves into something like a traditional blues solo, before Maxwell returns, so discreetly you almost miss his unassuming flourishes–a right hand trill here, a gentle cascade of notes there, all cresting above the raita, the sitar and the brush drums in fashioning a lovely, sighing conclusion. Essentially a dialogue between Maxwell’s piano and the guitar part of Manx’s Mohan Vina, the Spanish-flavored “Chillin’ in Casa” has a bracing ebb and flow about it but stays in a restrained groove even when the instruments intensify the level of their discourse about three-quarters of the way through–just chillin’, y’see. Keyed by Maxwell’s dark, ostinato piano riff, “Heart of Darkness” has a malevolent, eerie thump about it, a foreboding ambiance made all the more haunting by the restless, low-pitched striking of the West African balafon and the raspy but higher-pitched flight of the Turkish ney, with Manx’s fierce, moaning slide guitar solo adding a sudden jolt of fevered protest before the ney returns with a final, slightly mournful coda that, in true Conradian form, “seemed to lead into the heart of an immense darkness.” With Maxwell fashioning singing passages with a slight swing over Manx’s sitar and the bubbling Indian percussion, “Mombia Blues” is a fascinating amalgam of Bill Evans and the Beatles’ “Love to You” (at least the latter’s opening bars, that is). Boujmaa Razgui, who shines on raita throughout, has two special moments of his own on the album, both in the brief respites titled simply “Interlude A” and “Interlude B.” In the first he dominates half of the 2:08 track with a dynamic oud solo that twists, turns and curls back in on itself (I swear at the 48-second mark he interpolates a snippet of the Beatles’ “Piggies”) before Maxwell joins him for a soft landing that sets up the expansive vistas the band explores with a rock ‘n’ roll thrust in “Big Sky.” At only 1:36 “Interlude B” flies by, propelled initially by the steely lines Manx fashions on his Mohan Vina and by Maxwell’s anxious 88s, but the piercing, anguished cry of Razqui’s raita is positively riveting.

Maxwell isn’t abandoning his meat and potatoes here, though. His lowdown, moody piano and Manx’s angry, sputtering slide are epically heartbroken in a straight-ahead blues, suitably titled “Cryin’ the Blues.” In a complete 180, Manx and Maxwell are models of economy and elation in the strutting, exuberant romp titled “Rollin’ On,” even as they explore degrees of despair in a tough-minded “Just the Blues.” The communication between these two, a story unto itself, is one of this album’s multitude of pleasures.

The long and the short of it? Inventive, virtuosic, daring and soulful, David Maxwell’s Blues in Other Colors is something special, one of the best albums of 2012.