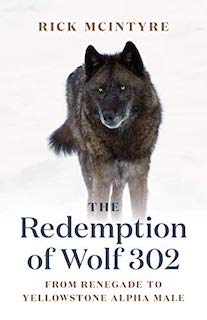 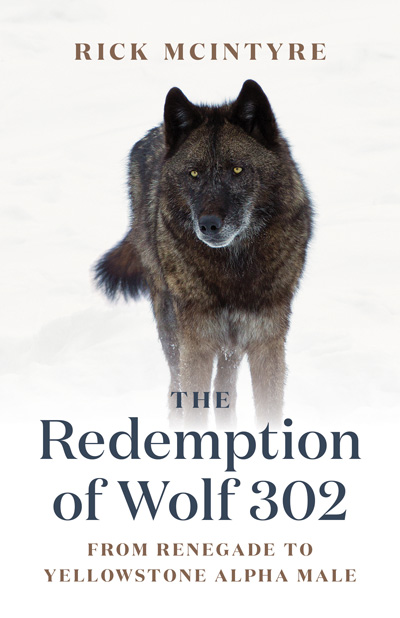 Biologist Rick McIntyre uses anthropomorphism to tell the story of his subjects.

The Redemption of Wolf 302: From Renegade to Yellowstone Alpha Male

In 1856 John Ruskin, an English art critic and polymath, called the attribution of human feelings to nature “the pathetic fallacy,” a practice that became known as “anthropomorphism” when specifically applied to animals. It was hardly new: Ancient anthropomorphic art has been found in caves; coyote and raven trickster tales abound in the lore of Indigenous peoples; Hesiod and Aesop wrote about talking birds; and the Brothers Grimm catalogued a menagerie of chatty domestic and wild animals. Following in their footsteps, writers as diverse as Lewis Carroll, Rudyard Kipling, Kenneth Grahame, Beatrix Potter, E.B. White, Walt Disney and Kate DiCamillo have employed creatures large and small – rabbits, panthers, badgers, spiders, elephants and mice – in stories of remarkable insight, wisdom and entertainment.

Naturalist Rick McIntyre adds a notable figure to this list of memorable animal characters in the third volume of his Yellowstone wolf trilogy, The Redemption of Wolf 302, which recounts the coming-of-age story of an individual known as Wolf 302, a slacker, Lothario and bad-boy coward, who late in life blooms into a selfless hero and model father. Unlike his literary predecessors, however, McIntyre isn’t writing fiction. One of the world’s most respected wolf observers, he has logged nearly 9,000 days watching wolves since their 1995 reintroduction to Yellowstone National Park, augmenting his observations with those of biologists conducting field surveys from the air, professional and amateur filmmakers, and teams of fellow wolf researchers.

Using this rich data set, he describes with fascinating detail how young Wolf 302 sets off from his natal Leopold Pack to visit the females of the Druid Pack, 25 miles to the east, getting several of them pregnant and royally pissing off their father, Wolf 21 (the hero of McIntyre’s second book), who thrashes but doesn’t kill him. When 302, accompanied by his yearling nephew, returns to the Druids for another visit, both are attacked, and 302 inexplicably turns on his nephew and bites him before both of them manage to escape. 302’s behavior isn’t a one-off. He soon acts with insouciant disregard for the welfare of his packmates when he lingers by a moose carcass, napping and eating, even though he can hear them battling rival wolves just a mile away. Yet, despite his spineless behavior, females adore him. Suave and solicitous, he manages to breed with them while they ignore the advances of wolves who seem better qualified to be hardworking mates.

Legendary wolf researcher and author Rick McIntyre speaks at W.O.L.F. Sanctuary 2021 Northern Lights and Lobos Gala. Posted on YouTube by wolfsanctuaryco. This is a 50-minute presentation.

Perhaps these females knew something about 302 that human observers didn’t, for by the time he reaches the ripe old age of 7 (Yellowstone wolves live only four to five years on average), McIntyre’s feckless protagonist has undergone a transformation. He helps in the hunt, he fights to defend his pack, he babysits pups, leading lost ones back to the den, and, defying all odds, becomes the alpha male of the new Blacktail Pack, siring a litter born in the very den where he was whelped.

While relating this saga, McIntyre documents the lives of the park’s wolves in absorbing detail: 13% of them die hunting, kicked and gored by elk and bison; 50% die in fights with other wolves, mostly over territory; wolves with black coats possess greater immunity to distemper; mother wolves with gray coats have better overall pup survival; wolves tend to choose mates of the opposite coat color. He then brings us to the moving climax of his story: 302, now an old, respected and beloved father, defends his pups against an invading pack, turning to confront his enemies head-on so the youngsters can escape. From the tracks left behind, McIntyre and his fellow researchers reconstruct what happened: 302, mortally wounded, hobbled off and lay down, the melted snow around his body indicating that he lived long enough for his pups to come back and surround him, their smaller prints speaking volumes: “They would have greeted 302 with wagging tails and licked his face,” writes McIntyre. “Some likely also licked his many wounds. That would have comforted him. … (He) died knowing he had saved his young sons and daughters. For an alpha male wolf, there is no greater accomplishment than that.”

“Anthropomorphism remains, and in McIntyre’s hands it has created an international advocacy for wolves, and not without good reason.”

I couldn’t read this without tearing up, and even though McIntyre cautions that he is only picturing what went through 302’s mind as he died, it’s this kind of emotional anthropomorphism that Ruskin and his followers railed against, and still do, to little effect. Anthropomorphism remains, and in McIntyre’s hands it has created an international advocacy for wolves, and not without good reason. As Charles Darwin noted, all mammals experience emotions like happiness and wonder, gratitude and magnanimity, love and sympathy. Most anyone who has watched mammals closely–particularly canids, wild and domestic–would agree. What we need is a more accurate term than “anthropomorphism” to describe these shared characteristics. Consider “mammaliamorphism.” It might do.

There is a danger, though, in thinking “mammaliamorphically,” for it can delude us into imagining that wolves are just like golden retrievers. They are not. Wolves will sometimes kill a herd of sheep; they also kill domestic dogs. Wolves that engage in such behavior need to be stopped, just as we stop humans who act badly. Yet that shouldn’t give us license to eliminate virtually all wolves outside of national parks, as the no-holds-barred wolf-hunting regulations in Montana, Idaho and my home state of Wyoming are currently, and mercilessly, designed to do.

Ted Kerasote has written about wildlife and wilderness for dozens of periodicals, including High Country News, Audubon, Outside, and The New York Times. His books include the national bestseller Merle’s Door: Lessons from a Freethinking Dog and Out There: In the Wild in a Wired Age, which won the National Outdoor Book Award.

Published with permission from High Country News, where this review was published on December 1, 2021. 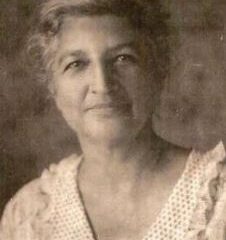