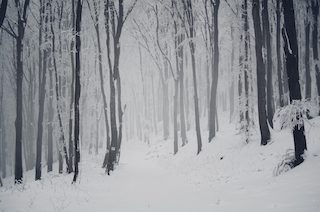 Origins: ‘Angels We Have Heard On High’ & ‘In The Bleak Midwinter’

‘Angels We Have Heard On High’

In The Christmas Carol Reader, William Studwell records an intriguing bit of misinformation about this carol, concerning Bishop Telesphorus of Rome in A.D. 129. According to the tale, the Bishop ordered the refrain of this carol to be sung annually to celebrate the birth of the Christ child, and that this refrain evolved into the famous French carol “Les Anges dan nos Campagnes.” Charming, according to Professor Studwell, but incorrect.

In fact, the carol appears to have come from France in the 18th century, possibly from the Lorraine region. Several sources indicate that first French publication was in Quebec in Choix de cantiques sur des airs nouveaux (1842). Another early French collection was Nouveau recueil de cantiques (1855).

The first certified English translation was in by the English Bishop James Chadwick in his 1860 Holy Family Hymns. Another early English publication was Henri Frederick Hemy’s Crown of Jesus Music, Part II, 1862. R. R. Chope followed in 1877 with Carols for Use in Church, with a sanitized fourth verse for the Anglicans, which, as Keyte and Parrott noted, avoided calling on Mary and Joseph. 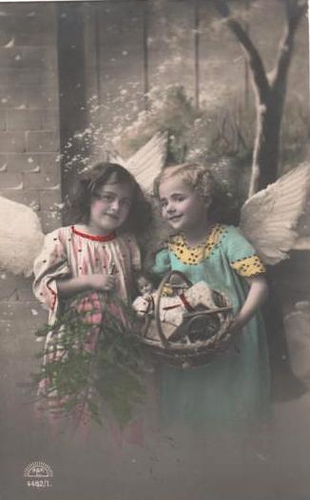 Here’s where it gets a bit hazy. Some sources believe that the first English translation was by James Montgomery on December 24, 1816, in the Sheffield Iris in a poem titled “Nativity”; it would later be known as the carol “Angels From The Realms of Glory.” The scholars seem to be lined up both for and against on this issue. Both sides seem to have their arguments. My college French is now 40+ years old (and, honestly, was never that good anyway), but the literal translation provided by Keyte and Parrott in The New Oxford Book of Carols doesn’t seem to support this contention. For me, the fact that the first French publication, in Quebec, 26 years after Montgomery’s poem appears, doesn’t support the “for” argument. “Your mileage may differ.”

Many modern versions use a version of “Gloria” an anonymous tune arranged by Edward Shippen Barnes (1887-1958), an American organist who studied at Yale University from 1910-11 and then briefly at the Schola Cantorum in Paris. On his return to the United States he was the organist at the Church of the Incarnation in New York from 1911-1912, at Rutgers Presbyterian Church from 1912-1924, in Philadelphia at Saint Stephen’s Church from 1924-1938, and in Santa Monica, CA at the First Presbyterian Church from 1938. He died at Idylwild, CA, in 1958. In addition to his arrangement of “Gloria” (at an date unknown to me), he composed numerous other musical pieces.

‘Angels We Have Heard On High’ (Version 1)

Angels we have heard on high

And the mountains in reply?

Shepherds, why this jubilee?

Why your joyous strains prolong?

What the gladsome tidings be

Which inspire your heavenly song?

Come to Bethlehem and see

Him whose birth the angels sing;

See Him in a manger laid,

Whom the choirs of angels praise;

While our hearts in love we raise.

See, within a manger laid,

Jesus, Lord of heaven and earth,

Lend your voices, lend your aid

To proclaim the Savior’s birth!

Angels We Have Heard On High’ (Version 2)

Angels we have heard on high

And the mountains in reply

Shepherds, why this jubilee?

Why your joyous strains prolong?

What the gladsome tidings be

Which inspire your heavenly song?

Come to Bethlehem and see

Him1 whose birth the angels sing;

Christ the Lord, the newborn King.

See Him in a manger laid,

Whom the choirs of angels praise;

While our hearts in love we raise.2 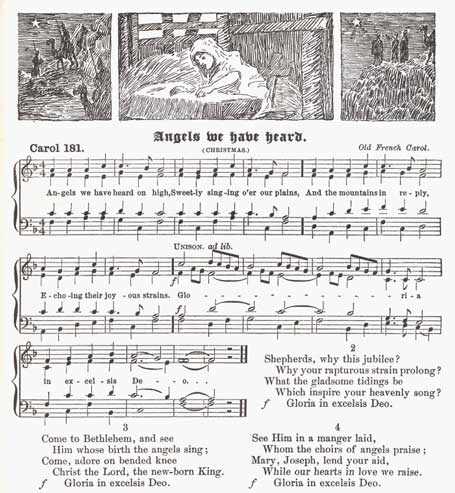 “Angels We Have Heard On High” (Version 2, Marlatt, an adaptation of Chadwick, 1837)

Others may merely share the tune, as is the case with:

“Angels From The Realms of Glory” (James Montgomery, 1816, as sung in Great Britain; more on this later)

“Shepherds In The Fields Abiding” (Translation of Quem vidistis, pastores by George Ratcliffe Woodward, 1910, using a “French or Flemish Melody,” which bears strong resemblance to “Gloria.”)

A posting by William C. Egan, Moderator, Christmas International Group at Yahoo.com, May 23, 2005:

watching their flocks on Christmas Eve would call to each other

across the fields and hills, singing the words “gloria in excelsis

Deo,” Latin for “glory to God in the highest.”

The shepherds’ song, an imitation of the song of the angels as they announced the birth of Christ on the first Christmas Eve, came from a second-century Latin chorale made popular when Pope Telesphorus, the pontiff from 125 to 136, ordained that “gloria in excelsis Deo” be sung at midnight mass each Christmas Eve.

In France in 1855, the Latin refrain sung by the shepherds was joined to the text and tune we sing today to become “Angels We Have Heard On High.” The verses come from a French carol called “Les Anges dans nos Campagnes” and the music from a popular French song of the day. 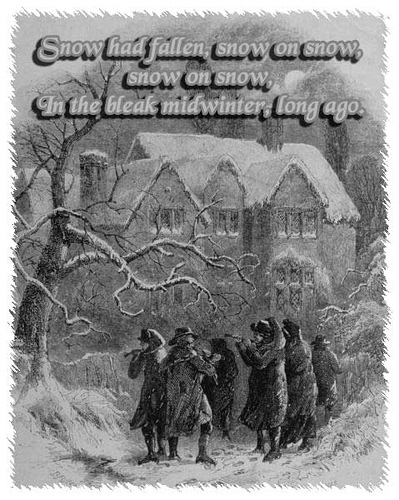 ‘In The Bleak Midwinter’

“In the Bleak Midwinter” was written by English poet Christina Georgina Rossetti (1830-1894) for inclusion in her 1904 collection, Poetical Works, where it was indicated to have been written before 1872. This text then gained great popularity when it was paired with “Cranham” in The English Hymnal, 1906. Written by composer Gustav Holst (1874-1934), “Cranham” was composed specifically for this text.

Although Christmas was linked by the 4th century church with December 25 as part of a strategy to Christianize various mid-winter solstice pagan festivals, there is no biblical association of the birth of Jesus with mid-winter. This poem appeared, dated 1872, in the posthumous collection of Christina Rossetti, a deeply religious daughter of an Italian emigré academic and English mother (so religious she refused the proposal of marriage from a man she loved deeply and thereafter became prone to melancholy).

Harold Darke’s well-regarded setting was written in 1911 and published by Stainer & Bell, London. It was originally made famous by the Choir of King’s College, Cambridge. Darke was born 29 October 1888 in London and died 28 November 1976, in Cambridge. Darke received his formal training at the Royal College of Music, where he studied composition with Charles Villiers Stanford, and at Oxford. He had a worldwide reputation as one of the finest organists and choristers of his era. 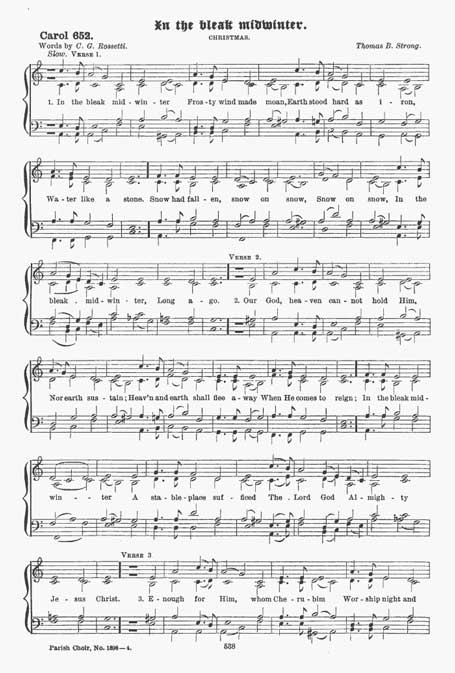 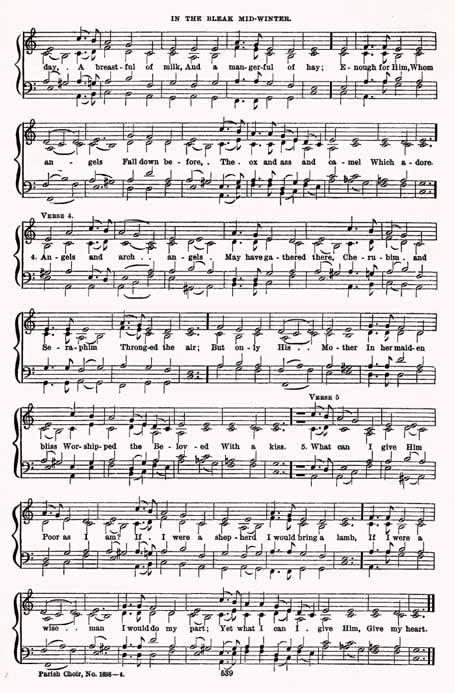 (Melody Line of Verse 1 Only)

Thomas B. Strong, DD (1861-1944) was, variously, Vice Chancellor of Oxford (circa 1897), Dean of Christ Church, Bishop of Ripon and Bishop of Oxford (1925-1937). He appears to have some interest in music, as evidence by two items, both related to the English composer, Sir William Walton:

(1) “Sir William Walton (1902-1983) was a chorister at Christ Church Cathedral in Oxford between 1912 and 1918. Dr Henry Ley (1887-1962) who had succeeded Harwood as Organist there in 1909 recognized his outstanding talents and introduced him to Sir Hugh Allen, Fellow of New College and Choragus to the University. The Dean at that time, The Very Reverend Dr Thomas Banks Strong, took an interest in young Walton’s welfare and managed to persuade the boy’s father to allow him to become an undergraduate at the University at the early age of sixteen. But Walton left in 1920 having repeatedly failed Responsions–a requirement of the BA degree.” (Source: Sleeve notes to “The English Anthem, Volume 7.”)

(2) A dedication “To The Right Rev. Thomas Banks Strong, Bishop of Ripon” by Sir William Walton of his work “Quartet for Piano and Strings,” which was composed 1918-1921 and first performed October 30, 1929 in London. (Source: William Walton Net.)

‘In The Bleak Midwinter’

Snow had fallen, snow on snow,

Our God, Heaven cannot hold Him

Heaven and earth shall flee away

When He comes to reign:

Enough for Him, whom cherubim

And a mangerful of hay;

Enough for Him, whom angels

The ox and ass and camel

May have gathered there,

But only His mother(1)

In her maiden bliss,

What can I give Him,

If I were a shepherd

I would bring a lamb,

If I were a wise man

I would do my part,

Yet what I can I give Him,

From Donald D. Anderson’s invaluable repository of essential history of the hymns and carols of Christmas 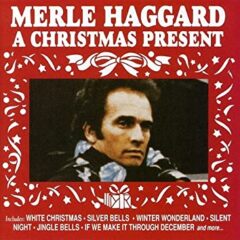