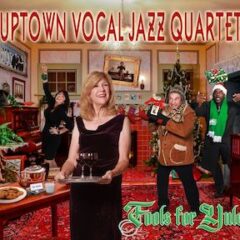 Building acclaim whenever and wherever it appears, the Uptown Vocal Jazz Quartet will surely add some more rave reviews to its clippings with its first holiday effort, Fools for Yule, on which the quartet’s strengths are in full flower. The result is a seasonal album worthy of regular rotation in any Yuletide fan’s collection.

That the mood is easygoing throughout is indicative of the group’s command of tone and texture in being easy on the ears but also challenging on its own terms without diminishing the warm, cozy mood sustained throughout. It’s a team effort. Vocalists Ginny Carr Goldberg, Robert McBride, Holly Shockey and Lane Stowe are accompanied solidly by their regular stalwart trio of Alan Blackman on piano, and the redoubtable rhythm section of bassist Max Murray and drummer Frank Russo. Expanding the combo, Donato Soviero sits in on guitar and Chuck Redd adds tasty vibes to the mix. The most surprising wrinkle in the proceedings is tender, tightly harmonized rendition of “Silent Night” lent added beauty by an evocative solo break courtesy special guest Keith Carr on Irish bouzouki—a moment so totally unexpected but so rich in atmosphere as to set this version apart from all the standard renditions you’ve heard.

Otherwise, the fare is a blend of holiday standards and five originals by Goldberg (who does all but one of the album’s arrangements, with McBride arranging Samuel Barber’s “St. Ita’s Vision” with Goldberg on piano), McBride and Shockey, the latter penning one of the long-player’s humorous highlights with her slow boiling ultimatum as Mrs. Claus to her beloved to pay more attention to his mate in “Santa Dear, Where’s Mine?” (“I’ll keep it really simple but I’ll lay it oh the line/I won’t resort to crying/but Santa dear, where’s mine?”), which also features Blackman’s cool Guaraldi-like piano break. Goldberg’s soothing piano-based ballad, “Whisper,” is handled tenderly as a lullaby and is followed by another Goldberg gem, the French language, Latin-tinged “L’amour nous entoure ce soir” (“Love Surrounds Us Tonight”) to the first touch of exotica to the proceedings not only in the male-female pas de deux vocal treatment but in a tasty guitar solo courtesy Soviero.

McBride’s warm guitar and the singers’ low hum provide a soft landing into the rarely heard verse of “Winter Wonderland” before the arrangement settles into a gently swinging groove that it breaks out of in strutting fashion, complete with a scatting break much in the style of a Jon Hendricks foray from yore; “Christmas Time is Here” honors the Vince Guaraldi-Lee Mendelson original in spirit but offers it in introspective fashion, both in the smooth, low-key vocals and instrumentally in moody piano and bass solos that capture a reflective feel appropriate to the closing lyrical sentiment’s winsome wish, “Oh that we could always see/such spirit through the year.” A take on Mel Tormé’s “The Christmas Song” distinguishes itself with an a cappella vocal arrangement adding heightened intimacy to the song’s Yuletide vignettes—you can practically feel the warmth emanating from chestnuts roasting by an open fire. In short, wonderful work by the Uptown Jazz Vocal Jazz Quartet in fashioning a Yule statement built to last. 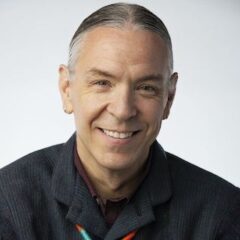 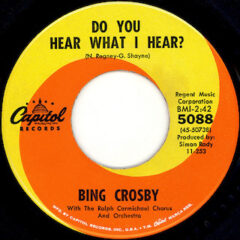