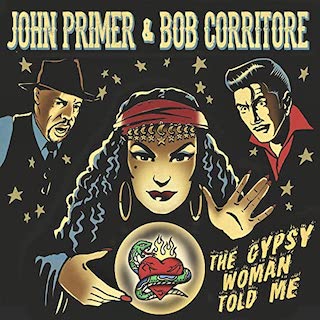 THE GYPSY WOMAN TOLD ME

If history has taught us anything, it’s that any time John Priimer and Bob Corritore get together on disc or in person, good things happen for blues fans. The latest proof of this assertion: The Gypsy Woman Told Me, the duo’s third and finest long-playing effort following 2013’s Knockin’ Around These Blues and 2017’s Ain’t Nothin’ You Can Do. Herein the standard Chicago blues idiom is invigorated by creative variations on familiar sounds and themes from two masters of the genre working at their peak; moreover, the sizzle they and their bandmates create with their spirited instrumental dialogues serves to heighten the fiery passion Primer delivers with his gritty, expressive vocals.

Now 75, Primer, a native of Camden, MS, embedded himself in the Chicago blues scene in 1974, when he began what became a six-year stint leading the house band at Theresa’s Lounge. Arriving in the Windy City in 1963, following the tragic passing of his father and his mother subsequently migrating north for work purposes, Primer made the most of his time at Theresa’s, sitting in with many of the town’s blues legends, including Buddy Guy and Junior Wells, ahead of accepting an invitation to join Willie Dixon in his Chicago Blues All Stars band in 1979; six months into the Dixon gig, Muddy Waters recruited Primer as his guitarist and band leader, and with Muddy he stayed until the latter’s death in 1983. From there it was on to a 14-year tenure with Magic Slim & The Teardrops, a prelude to a fruitful solo career that finds him aging even better than fine wine. If the artist we hear on this disc is what 75-years-old can sound like, we might be well advised to ask Mr. Primer about the source of his fountain of youth—witness the ferocity of despair and heartbreak he articulates with such brio on “Walking the Back Streets and Crying” is so deeply felt as to bring chills up and down a listener’s spine. (The song is best known in its horn-infused, slow blues version by Little Milton, released in 1972, but was first recorded and released by its writer, Sandy Jones, as a gospel-tinged slow blues version on Champ, a Nashville-based gospel label; Primer and Corritore’s scalding version ups the singer’s grievance quotient by several degrees, reimagining the tune on their own merciless terms.)

‘I Got the Same Old Blues,’ written by JJ Cale, performed by John Primer & Bob Corritore, from The Gypsy Woman Told Me

Now 64, Bob Corritore comes to Chicago blues as a native son, teaching himself harmonica and becoming a blues record collector upon experiencing an epiphany at age 12 after hearing Muddy Waters on the radio. When he was old enough to get into the local blues clubs, he absorbed the styles and techniques of harp masters such as Big Walter Horton, Junior Wells and Carey Bell, among others, and in the late ‘70s began sitting in on sets while at the same time learning his way around a recording studio well enough to produce acclaimed debut albums by Little Willie Anderson and Big Leon Brooks. It’s no accident that many albums he’s produced over the years—including this one, a co-production with Kid Anderson and Clark Rigsby—are always cited for the high quality of their deep, rich sonics and the clarity of balance between vocals and instruments. In 1981 he moved west, to Phoenix, AZ, where he still resides, and opened the Rhythm Room, holding forth with his band the Rhythm Room All-Stars backing a Who’s Who of outstanding blues artists when they came to town. Since debuting as a solo artist on CD in 1999 he’s accumulated a warehouse-full of award nominations and wins, including Grammys, a Certificate of Recognition from the State of Arizona for his championing of the blues and a Best Blues Album of 2013 from Germany’s Blues News Magazine for his first collaboration with Primer, Knockin’ Around These Blues. He’s herein advised to make room in his trophy case for multiple awards for The Gypsy Woman Told Me, whether it’s as a producer or as an instrumentalist: check the virtuoso, howling complement to Primer’s vocal and stinging guitar soloing on the title track made famous by Muddy Waters; or his romping soloing throughout the sizzling leadoff track, a furious take on Chuck Willis’s “Keep A-Driving,” with Corritore shadowing Primer’s rocking, serpentine solo (which evolves from an opening salvo of the howling lick identified with Robert Johnson’s Delta style and later electrified by Elmore James) while giving piano man Bob Welsh plenty of room for a frisky workout on the 88s; and note his richly textured approach in a funky take on J.J. Cale’s “I Got the Same Old Blues,” a tune reminiscent of Dr. John’s “Right Place, Wrong Time,” also featuring a piercing upper strings guitar sortie by Jimi “Primetime” Smith along with a tasty, understated undercurrent of organ courtesy co-producer Kid Anderson.

‘Walking the Back Streets and Crying,’ written by Sandy Jones, performed by John Primer & Bob Corritore, from The Gypsy Woman Told Me

This album is so strong in so many ways, it’s not worth the effort to find some trifling fault anywhere in the mix of instrumental support and Primer’s soulful vocalizing. Corritore gets a spotlight moment in blazing a trail through Sonny Boy Williamson II’s “My Imagination” (recorded as “Your Imagination” by Sonny Boy) with a driving harp solo as Primer rocks through the lyrics, which include the delightful observation, “I love her so hard, I just can’t sleep at night/when I go to eat my breakfast in the morning/my teeth and tongue begin to fight,” and the duo effects a mellow, thoughtful vocal-and-harp dialogue in Primer’s original contribution, a laid-back, downhearted blues titled “Walked So Long.” The assembled aggregate goes out as it came in, roaring and strutting through a humorous take on a “cold-hearted woman who can be sweet” (although Primer advises, “You better put away those scissors/ain’t gonna be no cuttin’ loose,” which perhaps explains his decision to corral his wanderlust), with Billy Flynn adding frisky guitar solos behind Primer shouting a plea thinly disguised as umbrage, “Yeah, baby! You better hear what I say/don’t you hear me talkin’ to you?” A perfect ending to a perfect outing, it is, thanks to a bunch of blues veterans bringing all their worldly and professional experience to bear on a well-chosen batch of Chicago blues that just won’t quit. Extra points earned for a great album cover by Vince Ray. 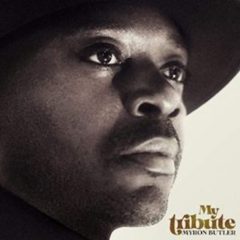