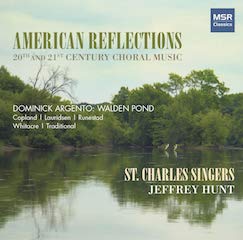 It’s hard to imagine an album better suited for our turbulent, disorienting, despair-riddled times than the St. Charles Singers under the direction of Maestro Jeffery Hunt performing the stirring choral selections collected here as American Reflections. This is not to say the album is a rose-colored-glasses view of our homeland, as one of its four themes is “Oppression,” songs reflecting the darkest hour in our history, when slavery was commonplace, a scourge so great and deep the American psyche has yet to recover from it; indeed, its echoes have oft been horrifyingly loud in recent years. The choir doesn’t shrink from articulating in song the horrors of bitter bondage, as the contrasting textures of male and female voices intertwine, blend and converse in “Why the Caged Bird Sings,” Jake Runstead’s setting of the poem “Sympathy,” written by Paul Dunbar, whose parents were slaves and whose poem frankly, fearlessly plumbed the nightmares haunting the enslaved in verses the Singers deliver with barely concealed fury but a palpable ache too, such as “I know why the caged bird sings/When his wing is bruised and his bosom sore/when he beats his bars and he would be free/it is not a carol of joy or glee/but a prayer/I know why the caged bird sings.” Even so, Stacy Gibbs’s “Great God Almighty!”, while rife with fear and brutality—and fear of brutality—also reveals the indomitable spirit of the oppressed, the faith in a better day—the “Unclouded Day” celebrated jubilantly in J.K. Altwood’s 1879 gospel song performed with bracing, life affirming spirit by the collective voices—when the singers declare “No—Stop! I’m fightin’ till my death/I’m gonna keep on a-runnin’ til my very last breath/Singin’ great God almighty/Great God almighty, mighty/Great God almighty.”

‘Long Time Ago,’ by Aaron Copland as performed by the St. Charles Singers on American Reflections

“Unclouded Day” (about which Bob Dylan is reported to have said, after hearing the Staples Singers’ 1956 recording of same, “It is the most mysterious thing I’ve ever heard”) is an element of the section Hunt defines in his liner notes as “Hope.” The section “Oppression” is but two songs—the aforementioned “Why the Caged Bird Sings” and “Great God Almighty!”—but two songs of such force as to give the closing “Hope” trifecta even greater emotional force, so great some listeners might join your faithful friend and narrator in being moved to tears by the cleansing sunlight the Singers’ performances conjure over the course of three songs totaling less than 10 minutes’ running time, with a new setting of an old Appalachian tune arranged here by Shawn Kirchner, “Bright Morning Stars,” taking nearly half of that time in being a stirring benediction sung to piano accompaniment, sounding very much like it’s coming from a church in the wildwood (even though the album is a collection of live performances recorded during the Singers’ 2017 concert tour of England in what Hunt describes as “magnificent spaces,” meaning Ripon Cathedral, St. James’s Church in Piccadilly, the Chapman and Whitacre at the Lincoln Cathedral Chapter House and in Durham Cathedral). Doesn’t matter. The lead is taken by an unidentified male tenor, whose plaintive tone exudes strength, resolve and even triumph as it rises in affirmation of not only the new day dawning (“Bright morning stars are rising”) on the land, but also in the spirit (“Day is a-breaking in my soul”). That couplet—“Bright morning stars are rising/Day is a-breaking in my soul”—sung with palpable commitment and spiritual depth serves as a summation of the incredible, richly textured journey the St. Charles Singers guide us through on American Reflections; a journey of hope beginning placidly, even lovingly, in sections themed “Water” and “Love” preceding the historical nightmare the program confronts in “Oppression” and then suggests the uncloudy day to which we would aspire in “Hope.”

‘I Hunger and Thirst,’ arranged by Kevin Siegfried, St. Charles Singers, as featured on American Reflections

It’s important to remember something Jeffrey Hunt wrote in his liner notes to the Singers’ previous album, a gem from 2015 titled Bushes & Briars centered on folk songs from great British composers such as John Rutter, Gustav Holst, Percy Grainger, Edward T. Chapman, Peter Warlock and, not least among equals, Ralph Vaughan Williams, among others. What Hunt stated back then applies equally well to the proceedings here, to wit: “By sharing this beautiful and authentic music with you, it is our hope that we all become more keenly aware of how much we have in common with one another past, present and future.”

‘Beautiful River,’ better known as ‘Shall We Gather at the River,’ the Reverend Robert Lowry’s 1864 hymn as arranged by William Hawley and performed by the St. Charles Singer on American Reflections

To that end, the album opens with one of the most heart tugging, evocative American anthems ever, “Shenandoah,” delivered in a solemn, hymn-like arrangement by James Erb wherein the ethereal lightness of the female voices ahead of the sturdy male voices taking the second verse gives the entire enterprise both an earthy and unearthly ambience, never more so than when those voices wind around each other, echoing and adding layers of longing to transform the familiar into something wholly fresh and deeply touching. The centerpiece of the “Water” and “Love” sections is ambitious indeed, “a masterpiece of American music,” as Hunt notes, in the form of Dominick Argento’s “Walden Pond,” a five-part setting of Henry David Thoreau’s classic Walden text, recorded in 2017, Thoreau’s centennial year. In five movements—The Pond, Angling, Observing, Extolling and Walden Revisited—Argento effects a musical recreation of Thoreau’s themes, in atmospheres and arrangements, and the singers respond with appropriate nuance as Hunt guides them in measured fashion through the serenity of “Angling” with minimal accompaniment and with equal sensitivity in the more discursive “Extolling,” for instance. In many ways the “Love” section is the most challenging. Songs such as the somber “Water Night,” by Eric Whitaker from the Spanish poem by Octavio Paz and the delicately rendered “Dirait-on” by Morten Lauridsen from a text by Rainer Maria Rilke are poetic and evocative but complex in construction of the multiple mixed gender voices blending and separating, cascading, intertwining and creating romantic atmospherics, although one celebrates love’s fulfilling hope (“Water Night”) whereas Rilke’s text extols “self-caressing through its own clear reflection…Narcissus fulfilled.” The “Love” section closes with arguably the most familiar song in this program, “Beautiful River,” better known as “Shall We Gather at the River,” the Reverend Robert Lowry’s 1864 hymn as arranged by William Hawley. It serves as a serene prelude to the tensions engaged thereafter. In the end, American Reflections imbues the listener with a sense of being on hallowed, holy ground, closer to the essence, its spirituality infusing the body, the soul sensing day is a-breaking and bright morning stars are rising. Selah.