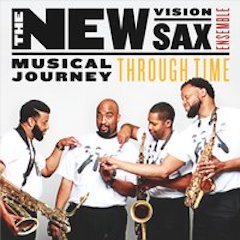 In the spirit of the 29th Street Saxophone Quartet and the legendary, trailblazing World Saxophone Quartet, the South Florida-based New Vision Sax Ensemble is a woodwind answer to the classical string quartet; unlike its esteemed predecessors, the New Vision Sax Ensemble—at least on this, its first album—offers no original material but rather focuses on jazz and classic pop and show evergreens. The musicians—Diron Holloway (soprano, clarinet and alto sax), James Lockhart (alto sax), Jason Hainsworth (tenor sax), group founder Melton R. Mustafa (baritone sax)—are all professional music educators as well. To many that would mean they mostly color within the lines, but in fact their music making is anything but a sterile, academic exercise. You wouldn’t expect four saxes to equal, say, the wild-ass baroque ride given Dizzy Gillespie’s “Night in Tunisia” by Art Blakey’s Jazz Messengers in 1957, but the New Vision Sax Ensemble’s five-and-a-half-minute interpretation is a medium-cool delight in its own right. Mustafa’s baritone holds down the famous bass part with authority, as the conversation between the tenor and the altos becomes more heated, producing scintillating textures of soft and light, even capturing some of the freewheeling energy of Blakey’s version while paying homage to Dizzy’s original. Purists may be more appeased by the quartet’s version of Monk’s “‘Round Midnight,” with soothing ensemble passages colored by melancholy. The horns’ restraint here has the effect of summoning both loneliness and sensual longing—you have to figure Monk would approve.

‘I Feel Pretty,’ from West Side Story, performed live by the New Vision Sax Ensemble and featured on the group’s album, Musical Journey Through Time

Monk’s ‘‘Round Midnight,’ performed live by the New Vision Sax Ensemble and featured on the group’s album, Musical Journey Through Time

“Conservation,” the least known track here, composed by big band composer R. Watson, riffs on the melody of Burton Lane-Alan Lerner’s Broadway hit, “On a Clear Day You Can See Forever,” but takes the melody to quite different places where the horns intertwine and spat with each other and the baritone has its own field day as the glue keeping the workout from flying off in all directions. For the most part, the musicians respect the melodies of the outstanding repertoire they’ve chosen here. So “My Favorite Things” (John Coltrane’s favorite Rodgers & Hammerstein song, by the bye) is a fairly straightforward rendering with an intriguing oscillating undercurrent beneath a cool rhythmic dance between the clarinet and the altos, whereas the witty, lively interplay in Leonard Bernstein’s “I Feel Pretty” (from West Side Story) is frolicsome and evocative—in fact, fans of Imani Winds will hear that group’s signature approach in the arrangement. An 11-minutes-plus selection of tunes from Gershwin’s Porgy and Bess has the feel of a song cycle and unexpected layering of textures produced by the various instruments’ interplay (the “Summertime” segment is especially compelling), and the fellows also successfully transpose and traverse ragtime in a sprightly medley of Scott Joplin tunes, “Scott Joplin Portrait.”

‘Amazing Grace,’ dedicated to Armed Forces veterans, as performed live by the New Vision Sax Ensemble and featured on the group’s album, Musical Journey Through Time

Tight, engaging ensemble work, with the clarinet, followed by the tenor sax, soaring over all, gives the old warhorse “Won’t You Come Home, Bill Bailey,” an invigorating makeover (Jeff Simon of the Buffalo News cites this tune as giving the ensemble “vaudeville cred”). Closing on a reverent note, the musicians offer a magisterial, spiritually resonant take on “Amazing Grace.” It’s not only a nice touch: on an album titled Musical Journey Through Time, it reminds us of the timeless, in music and in our inner lives. Well done. –by David McGee 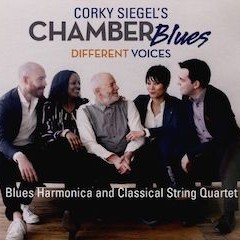 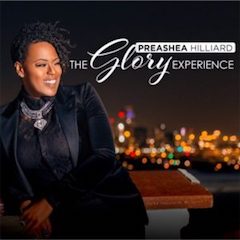