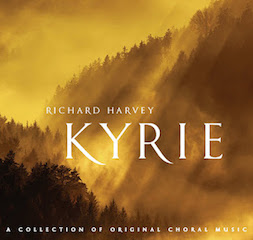 You have heard the music of Richard Harvey, even if the name does not mean anything to you. A British composer for film and TV, Harvey’s credits include the Kyrie for the Magdalene, which was used in the film of The Da Vinci Code and is this work that forms the title track of Harvey’s new disc of choral music, Kyrie on Altus Records. Recorded by the Latvian Radio Choir and Estonian Philharmonic Chamber Choir, with musicians from the Polish Radio Symphony Orchestra and Sinfonietta Riga conducted by Kaspars Putnins, Sigvards Klava, Tomasz Szymus and Richard Harvey.

The disc has eleven tracks and Harvey’s texts vary from his own, to Psalm 100, 12th century Latin, Shelly (Mutability), George MacDonald and Henry Neele. As might be expected given the choral forces involved, the performances are superb. Both choirs exhibit their famous combination of control, focus, line and elegant purity. They bring to the music a wonderful clarity and finely honed feel for the elegant lines of Harvey’s music.

Harvey’s style is unashamedly tonal and lyrical, but that does not mean it is lacking complexity or that he doesn’t generate his own particular contemporary feel. There are echoes here of some of the Baltic minimalists in the textures, but the harmonies often evoke Eric Whitacre and Morten Lauridsen. So who is Richard Harvey?

‘O Be Joyful,’ written by Richard Harvey, from Kyrie. Presented by John Suchet as his Album of the Week on Classic FM, broadcast Feb. 20, 2017

He trained at the Royal College of Music (graduating in 1972) and joined the Early Music group Musica Reservata, and then founded the progressive rock/folk band Gryphon. He went on to become a session musician, and through this became involved in composing, first working on Tales of the Unexpected in 1978. His concert work has included Concerto Antico, for guitarist John Williams, with whom he has worked a lot, as well as a recorder concerto, Concerto Incanto, for Michaela Petri.

The music is frequently ethereal, with some finely honed musical textures and evocative harmonies. Lack of texts in the CD does make it difficult to dig deeper into the works, and it does not help that one of the few weaknesses of the performance is the rather occluded diction of the choirs. The performers clearly prize beauty of line over comprehensibility.

‘In Paradisum,’ written by Richard Harvey for the TV series The Shape of the World. From Kyrie. Presented by John Suchet as his Album of the Week on Classic FM, Feb. 23, 2017

Some of the music has its origins in Harvey’s film work (e.g. Kyrie for the Magdalene) whilst the theme for Recordare was originally used in Robert Young’s film about Adolf Eichmann, and both Of a Mountain and In Paradisum were originally for a 1990 television series about discovery and cartography, The anthem O Be Joyful was originally composed for the Crown Jewels Exhibition at the Tower of London! Carol–Eventide was commissioned by the BBC in 1986, and The Calm Hours originated in film shown on BBC2, Dead Romantic.

So the music spans quite a wide range of time, and has varied origins. But Harvey’s style is coherent and consistent, so that the disc hangs together as a satisfying whole. Within the range of works, Harvey works in quite a mix of styles, resulting in a pleasing variety on the disc.

‘Kyrie for the Magdalene,’ composed by Richard Harvey for The Da Vince Code and featured on Kyrie.

The choir and the orchestra were recorded separately and then mixed at Abbey Road Studios. The result is a superb recorded product with a very high-end gloss, which makes the pieces highly attractive. What, perhaps, you miss is the visceral immediacy of live performance, something extra beyond the poised beauty of the music. I’ve attempted to avoid saying the music sounds like film music, but that was my initial reaction. I think because of the mixing process and the lack of immediacy, the beautiful performances are in danger of sounding like the background to something, evoking rather than generating a direct reaction.

But if you enjoy the work of composers such as Patrick Hawes, Morten Lauridsen and Eric Whitacre, then this disc is certainly worth investigating. And all the music on the disc is published so Harvey would certainly be a composer worth investigating for choirs interested in something new yet approachable for the repertoire. –By Robert Hugill