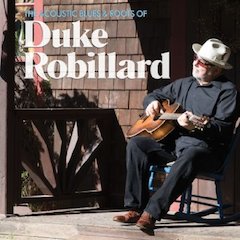 In what he describes in his liner notes as a “little trip through time with me and my friends,” Duke Robillard assays blues, pop, jazz and early country tunes drawn primarily from the ‘20s through the ‘40s (apart from Stephen Foster’s “My Old Kentucky Home,” a couple of originals and Robbie Robertson’s “Evangline”) and sweetens the recipe by playing only myriad vintage acoustic guitars, all from his vast personal collection. His stellar backing cast numbers, among its many top-tier practitioners, acoustic fingerpicked guitar and lap slide ace Mary Flower; vocalist Maria Muldaur; former Muddy Waters harmonica master Jerry Portnoy; Doug James on baritone sax and harmonica; long-time bandmate Mark Texeira on drums; and, foremost, the late, great Jay McShann, last of the Kansas City blues giants.

Charlie Christian’s ‘Profoundly Blue,’ with Duke on guitar, Jay McShann on piano, from The Acoustic Blues & Roots of Duke Robillard

McShann has one of the album’s finest moments, delivering a master class in the fundamentals of economical, ruminative discourses on the 88s on Charlie Christian’s “Profoundly Blue,” in response to Duke’s aggrieved guitar passages, with the moody result enhancing the song’s profound heartache. Poignancy infuses another touching instrumental, Foster’s “My Old Kentucky Home,” with Duke fashioning a pastoral ambience with the unusual tinny sound of a tenor harp (“actually a banjo with a wooden arched top, instead of a calfskin head,” Duke writes) and the rich, warm sound of an early 1900s B&J parlor guitar. Eric “Two Scoops” Moore is the source for “Left Handed,” here given a humorous, grinding take with Duke doing a fine job impersonating a man for whom the world simply doesn’t work in, you might say, the right way. With Sunny Crownover delivering a keening lead vocal, “Evangeline” brooks favorable comparison with Emmylou Harris’s shattering rendition of the Robbie Robertson tune, on a swaying, atmospheric track as fashioned by guitar, dobro, concertina and bass. Traditional country is represented with distinction by Duke’s credible balladry and tasty, swooning dobro lines on Hank Williams’ heart tugging “Let’s Turn Back the Years,” and via a personable duet with a bluesy Mary Flower on the languorous Delmore Brothers’ “Nashville Blues.”

The Delmore Brothers’ ‘Nashville Blues,’ with Duke dueting and sharing guitar duties with Mary Flower, from The Acoustic Blues & Roots of Duke Robillard

Just when you think you’ve heard W.C. Handy’s “Saint Louis Blues” in about every way it can be heard, Duke comes up with a positively haunting, and scintillating, re-arrangement of it. The first element of it is Billy Novick’s mournful clarinet solo, a table setter for the atmospheric dramatics supplied by the dense, captivating sound of, in Duke’s words, “about 20 mandolins, mandocellos, mandolas and a mandobass.” Duke then enters with a gently swinging vocal, adding a lighter feel to the proceedings and in turn setting up his lively instrumental solo on a 1930s Kay Deluxe guitar.

Right on time for the holiday season, the previously issued Gus Kahn-Charley Straight Yuletide evergreen “Santa Claus Blues” swings away with appropriate glee, powered by Doug James’s hefty baritone sax roar, Duke’s feisty solo workout on an Epiphone Broadway and the relentless, driving pulse courtesy the John Packer-Marty Richards rhythm section, all serving a rousing, footloose Maria Muldaur vocal with a sultry edge—a real crowd pleaser, this. And speaking of crowd pleasers, Duke’s gritty take on Jimmie Rodgers’s “Jimmie’s Texas Blues” is recommended not only for robust sound of an early 1900s Joseph Bohmann guitar (he also deploys it on a dobro slide track exactly like the one on Rodgers’s original recording) but also for Duke’s winning stab a yodeling. His is not quite as assured as Rodgers’s yodeling, but it fits just fine on this loosey-goosey go-around. Duke yodeling? What more could you ask? 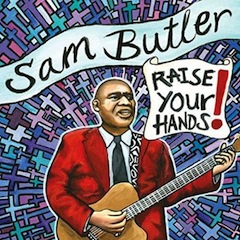