Note: As summer winds down, we present, as the subhead indicates, an offbeat playlist of seasonal tunes, most of them of the obscure surf variety. And in keeping with a conceit we adopted a few months ago in Video File, we’ve added some pertinent comments from YouTube viewers, some offering insight into a group’s personnel and/or history, some citing the poignant memories certain songs evoke in them. Without further ado…

Garland English: This was my favorite and best of times. I turned 10 in the summer of 1957. I could roam the neighborhood at night and there was nothing to be afraid of. I could walk to the playground over a mile away and they played these rock and roll songs. I am sure this was one of them, as it sounds so familiar. The teens would be dancing but I didn’t care about that. I just swung on the swings and slid sown the sliding board. We didn’t have Daylight Savings Time and it was dark earlier. When I walked home I never thought about being locked out, because we didn’t lock our doors. Nobody ever came in our house. and I was just plain happy. The Doo Wop Rock and Roll was popular and so was Elvis Presley and Buddy Holly and the Crickets and many others. I saw them on Ed Sullivan and also watched American Bandstand. I will always treasure the 1950s.

Steve52344: Fantastic job by Krips Johnson on lead. This song captures the essence and energy of true rock & roll. It moves! You can ride it.

Tonithenightowl: If you don’t love Johnny Maestro, you have no soul.

Freddie Barrett: There ain’t no trouble in paradise, believe me. And there is no trouble with this beautiful song, and the great Johnny M. What a gift he was. Thank you God.

Joe Cianci: Johnny Maestro, one of the best lead singers ever, surely will be missed. It wasn’t one song; it was song after song. R.I.P. JOHN AND KEEP SINGING UP THERE.

Named for the first lighthouse, in Alexandria, The Pharos survey Latin American tides with this surf rock gem.

greg tangonan: In 1963 I was a Junior in La Puente High School, long before coming to the Philippines. I played drums in the band called the Pharos, and we cut a surfer record on Del-Fi records called Pintor. The lead guitar was Cesar Oliviado from Mactan Island. Cesar taught us to play this song at parties with a surf beat. I just found the record promotion from Del-Fi on Youtube. At the time bands were creating surf music and Del-Fi had groups like the Surfaris on contract. Haven’t found the back side of the record entitled “Wanging.” Lloyd Thaxton, an LA teen show host, played the backside on TV. I am really happy I became a Physicist instead of a musician …

rowjelio: For those of you who don’t know, it’s a surf version of the Spanish song, ‘Angelitos Negros,’ an old bolero from the 30s/40s. The first line starts off with ‘Pintor, Pintamente angelitos negros.’ It’s a very sad song.

CrakShaft: You know that feeling of being helpless in front of an overwhelming wave of mixed feelings, like admiration for beauty, being happy to be alive to see it, gratitude, relief and letting go of tension? Kinda like when you go on vacation and just LET GO of everything else. Well this song is so good, it took me back to that place! I cried a little, then laughed a little when I saw myself in the mirror. I must be going mad, but this song goes straight to my heart, and to my mp3 player! Thank u!

American rock ‘n’ roll fans of a certain age know the Dakotas as the backing band for British Invasion sensation Billy J. Kramer (“Little Children”). The group’s history, though, dates from September 1960, when rhythm guitarist Robin MacDonald formed the group with Bryn Jones on lead guitar; Tony Bookbinder (also known as Tony Mansfield) on drums; and Ian Fraser on bass. Ray Jones eventually replaced Fraser on bass, and Mike Maxfield, late of Manchester’s The Coasters, joined up as lead guitarist in February 1962, replacing Bryn Jones. The group was backing Pete MacLaine when Beatles manager Brian Epstein, who was also managing Billy J. Kramer, recruited them to serve as Kramer’s backing band. In addition to accompanying Kramer in the studio and on the road, the Dakotas recorded on their own and had one Top 20 hit, an intense, driving, guitar-drenched tune in the surf mode called “The Cruel Sea,” a Maxfield composition that rose to #18 on the U.K. charts in July 1963. Re-titled “The Cruel Surf,” it was recorded in the U.S. by The Ventures.

Sweden’s Spotnicks originated as a duo called The Rebels (1956), formed by Bo Starander (rhythm guitar, vocals; later known as Bob Lander), and Björn Thelin. In 1957, when they were joined by lead guitarist Bo Winberg, they became Rock-Teddy and then The Blue Caps. In 1958 Ove Johansson joined on drums, and a name change ensued, to The Frazers. They Upon signing a recording contract in 1961, the band changed its name again and became forevermore The Spotnicks, a play on the Russian satellite Sputnik as suggested by their manager, Roland Ferneborg. In short order they found themselves being the first Swedish group to have significant international success, in a similar style to The Shadows and The Ventures. They toured Europe, and one of their early records, a sufrt-styled romp through the country standard “Orange Blossom Special,” became anl international hit, making the Top 30 in the UK Singles Chart in 1962 (on the Oriole label) and reaching #1 in Australia. Around this time they began wearing their trademark “space suits” on stage. Their debut album, The Spotnicks in London: Out-a Space, was released in 1962. Other hits included “Rocket Man” (based on the Soviet/Russian folk march “Polyushko-polye”) and “Hava Nagila” (their biggest UK hit at #13). Winberg also recorded solo as The Shy Ones. After undergoing numerous personnel changes, the band split up in 1970 shortly after releasing its fifteenth album, The Spotnicks Back in the Race. With a large fan base and a record label in Japan clamoring for more Spotnicks, Winberg reformed the group in 1971, and continues to lead versions of The Spotnicks, occasionally including Lander and/or Thelin, on tour and in recordings ever since. In 2013, Winberg and Lander announced a final tour, which concluded in May 2014.

Mac: Something really demented about the guitar tone. I think one guitar is slightly sharp or something; there’s definitely some weird accidental harmonization going on (maybe 1 cent difference). It fits the space theme well though, it’s strikingly “alien” sounding…not so much “we come in peace” as much as “we’ve come to harvest your brain.” Strange how little nuances in music can totally alter your perception of what you hear! I bet many find this relaxing and serene, but are horrified by, say,  death metal.

Andreas Christian Fjørtoft: I need Music every day, so play for me. Please do, and I will send you holy prayers and pray for a better world and Power from the Lord above. 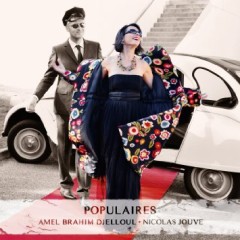