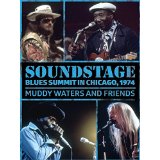 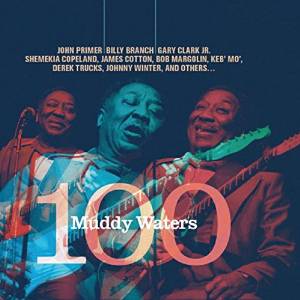 Near the beginning of the terrific Sony Legacy first-ever DVD release of what was the first-ever Soundstage show on PBS, 1974’s Blues Summit in Chicago, featuring Muddy Waters communing with a dazzling lineup of his acolytes, Dr. John takes a break from fashioning an ornate, bluesy New Orleans run on the 88s to discuss the blues with those gathered around his piano. A snippet of dialogue goes like this:

JOHNNY WINTER: It’s people music; it ain’t musician music. You know it don’t make any difference how fast you play it, it just don’t make no difference. You might get a cat that don’t know but two chords but he can put it across where it’s like feeling, y’know. It’s like life, y’know. It’s life.

MIKE BLOOMFIELD: Muddy had this guitar player, Georgia boy. He definitely wasn’t no technical guitar player but he had that sound, man, had that twang, y’know what I mean? He could just take one string and stretch it the right way.

For the next 50 minutes or so, these men (and others) and one woman, Koko “Wang Dang Doodle” Taylor, and Muddy make a lot of emotional music that makes you feel, y’know. If you can focus on the music making instead of the absence of similar titans in the mainstream music world today, this video of an amazing summit session will really lift your spirits, get under your skin, make you feel a little better about the prospects of getting through another day.

Introduction to Blues Summit in Chicago, 1974

The year of our Lord 2014 happens to be the centennial year of Muddy’s birth. This DVD is one of the tributes being paid to Muddy at 100; there is also a lively recorded tribute to Muddy, Muddy Waters 100, steered by twice Grammy-nominated producer Larry Skoller (of the Heritage Blues Orchestra), bringing some notable contemporary blues practitioners in honor of a man to whom all owe a huge debt. This lineup includes John Primer, Johnny Winter (the only musician appearing on both the 1974 summit and this 2014 session, Winter passed away only five weeks after completing his star turn on “I’m Ready,” the title track of Muddy’s career energizing, Grammy winning, Winter-produced 1978 album), the towering James Cotton, Muddy’s long-time guitarist “Steady Rollin’” Bob Margolin, Derek Trucks, Keb’ Mo, Gary Clark Jr., Shemekia Copeland, Billy Branch, Kenny “Beedy Eyes” Smith (son of Muddy’s stalwart drummer from the later years, Willie “Big Eyes” Smith), Johnny Iguana, bassist Felton Crews and guitarist Billy Flynn.

Producer Skoller deserves a tip of the hat for the deep, bottom-rich sound he’s fashioned for the Muddy 100 tribute. It’s a gut-shot from the word “go,” as the opening workout on “Got My Mojo Workin’” comes rumbling out of the speakers, with a muscular, emotional vocal by Primer, with Copeland entering later as a wailing counterpoint to Primer; “Still a Fool,” from 1951, features another ominous Primer scorching of the lyric with Derek Trucks’s slide screaming and howling banshee-like as it weaves under, around and sideways through the track. Indicative of the unexpected treats here is the thumping, stomping charge through “I Be’s Troubled,” the first song Muddy played for Alan Lomax after the latter discovered him by accident while searching for Robert Johnson, who was already in his grave. Apart from Primer’s rich vocal, Margolin tears up the track with his piercing slide work. Winter brings the slide home with a vengeance on “I’m Ready”—stinging, cutting, slicing and dicing—as Johnny Iguana gets it going on keyboards while Crews and “Beedy Eyes” supply the powerhouse bottom. Primer is personable and ebullient in delivering the “Good News,” a cool shuffle centered on an impending romantic reunion with his pregnant paramour. Muddy cut this engaging original song in 1957 and Cotton steps in here with another fine sortie on harmonica, much as he did in ’57, with Margolin buttressing the attack with monstrous slide soloing. Cotton also sits in on another Muddy track he appeared on its original incarnation in 1959, “I Feel So Good,” an upbeat strut that would fall into Dr. John’s above-cited category of “happy blues,” an impression Cotton’s soaring, skittering harp lines underscores, as does, most assuredly, Primer’s free, swinging vocal. A 1949 recording plucked from the Muddy catalogue for this outing, “Last Time I Fool Around with You” bops along on the strength of Felton Crews’s walking bass, Iguana’s frisky keyboard, an exotic percussive twist courtesy Blaise Barton’s guiro and, not least of all, Keb’ Mo’s tasty, sizzling slide support. In many respects your faithful friend and narrator’s favorite track is a spare affair: the final cut, “Feel Like Going Home,” a Muddy tune from 1948, is a dark, despairing mean woman blues sung by a man who’s lost it all and anticipates his ultimate fate of the grave—Primer’s husky vocal puts the chill into Muddy’s lyrics and he further augments the doomsday effect with lowdown slide guitar over the ominous, plodding rhythm laid down by the only other players on the track, Crews (bass) and “Beedy Eyes.” Other than Clark Jr., who doesn’t make much of an impression on “Forty Days and Forty Nights” (which is rather true of a lot of his work), the cats gathered here do themselves and Muddy’s legacy proud, especially Primer, the real star of the show for the way he digs deep into these songs and into himself for one powerhouse, emotionally rich vocal turn after another. He’s nothing short of awesome–reason enough to add Muddy Waters 100 to the collection.

A taste of the closing jam on ‘Got My Mojo Workin’,’ from Blues Summit in Chicago, 1974

With the collection of players he has at hand on Blues Summit in Chicago, 1974, Muddy has plenty of help in making it a night of memorable moments. But no one steals the show from the man. On “Long Distance Call” he cuts loose with a solo that seems to leave Bloomfield awestruck—and that’s before he makes a Shakespearean drama out of the song’s themes of betrayal and deceit. Muddy leaves the stage at one point and turn it over to Nick Gravenites and Junior Wells to tear up “Messin’ With the Kid, during which Bloomfield asserts himself with heated authority in between Gravenites and Wells taking turns on growling lead vocals. Buddy Miles, Johnny Winter, Junior Wells and Dr. John join Muddy for a dangerous take on “Mannish Boy,” as a prelude to Willie Dixon, Koko Taylor and Phil Guy (Buddy Guy’s brother) stepping up for a rough and rowdy romp through “Wang Dang Doodle,” with Bloomfield leading the instrumental charge with red-hot, stinging punctuations throughout, hunched over his guitar and answering every Koko growl with a flurry of piercing runs. With Winter taking the lead vocal and lead guitar on “Walking Through the Park,” the number is anything but a walk in the park, especially when Junior Wells adds his shimmering harp behind Winter’s gruff, gripping vocal and Winter encourages Dr. John to get it going on the 88s and the good Dr. obliges with a flourish.

It does always come back to Muddy, however, and he doesn’t disappoint. A priceless moment occurs when he brings Willie Dixon on stage to join him on Willie’s classic “Hoochie Coochie Man.” The gleeful look on Muddy’s face when Willie lays into the second verse and Willie’s retorts to Muddy thereafter before they join voices on “I’m a hoochie coochie man/but you know I’m here/everybody knows I’m here”—during which they slap hands with each other—could not be scripted; it comes from the heart. Seemingly loose and free flowing, what the summit lacks in intensity at times is more than made up for in spirit and in the simple joy these young and old veterans express in their music making. Muddy seems tremendously pleased by what unfolds around him, and when he jumps in the proceedings take on a certain gravitas by dint of his regal bearing. The only false note is at the end, when he sings his classic “Got My Mojo Workin’,” with its refrain of “got my mojo workin’ but it just don’t work on you.” Wrong. It works on anyone immersed in Blues Summit in Chicago, 1974. 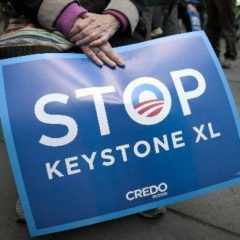