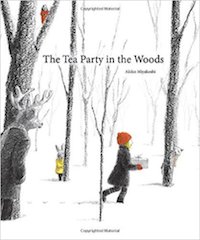 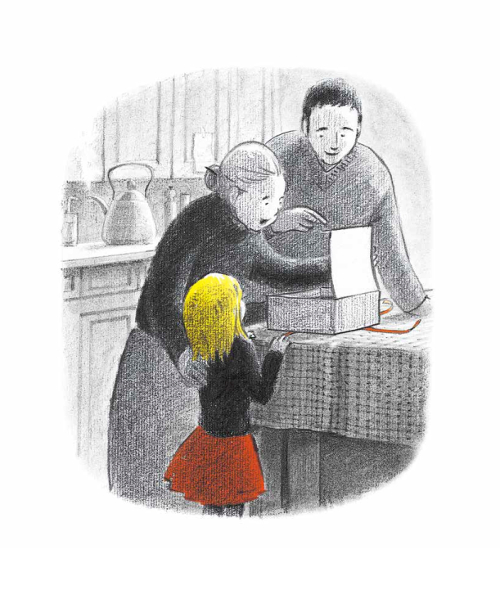 It just so happens that my very favorite medium in picture book illustration is charcoal. I get all googly-eyed when I see it done well. But that’s not the only reason I love this book from author-illustrator Akiko Miyakoshi, The Tea Party in the Woods, coming in August from Kids Can Press and originally published in Japan back in 2010. The visuals here are pure magic and filled with intriguing details, and the story is one of mystery and friendship.

A young girl, named Kikko, awakes to a “winter wonderland.” She heads out to deliver a pie to her Grandma, the one that her father, who has already set out for Grandma’s house, left behind. This is all slightly reminiscent of the classic tale “Little Red Riding Hood” in that the girl’s destination involves her grandmother, and her skirt and winter hat are bright reds (much like Red’s cape) in a sea of white snow and dark charcoals. But that’s where the similarities end: There’s no menacing wolf here.

Instead, she is fairly sure after heading out that she spots her father ahead, and in an effort to catch up to him, she falls in snow drifts and the pie box is crushed. She follows her father anyway to “a strange house. Has it always been here? Kikko wondered.”

Instead, she is fairly sure after heading out that she spots her father ahead, and in an effort to catch up to him, she falls in snow drifts and the pie box is crushed. She follows her father anyway to “a strange house. Has it always been here? Kikko wondered.”

Her father enters the house, and when she peeks in the window, she is surprised to see, not her father, but a great big bear. A kind lamb asks Kikko, still outside, if she is there for the tea party. She goes inside with the lamb, and here is where the magic and mystery amp up. There is a fabulous spread where all the creatures at this party—forest creatures of every stripe—turn to stare at her. But Miyakoshi places readers right with Kikko, so it’s the reader who gets a stare-down too. It’s a wonderful, rather spine-tingling moment.

Despite their stares, they welcome her. And the feasting begins, Kikko’s yellow hair the only spot of color in this sea of charcoals. (Later, we see a bit more color when we pan out to see the group as a whole.) I love to see happy feasts in picture books, one reason I’m a John Burningham fan. The book closes with a lovely surprise from the tea party members, one that benefits both Kikko and her grandmother. (It’s hinted at in the illustration opening this post.)

Was it all a dream or did she really feast with forest creatures? It doesn’t really matter. The adventure was worth it, either way. 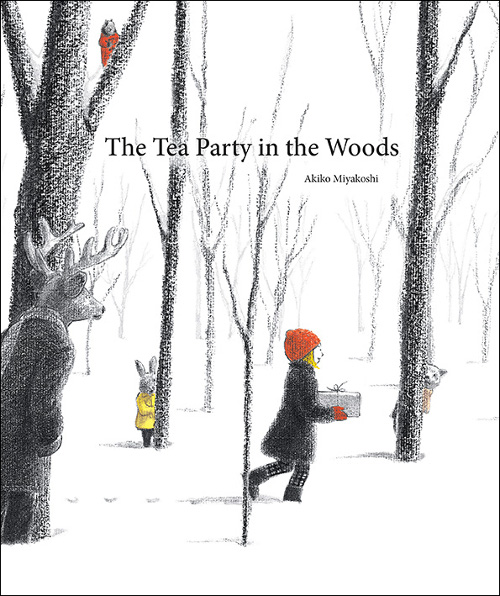 THE TEA PARTY IN THE WOODS. Copyright © 2010 by Akiko Miyakoshi. English translation © 2015 by Kids Can Press. Illustrations reproduced by permission of the publisher, Kids Can Press, Toronto.
[box_light]

Julie Davidson (Jules) conducts interviews and features of authors and illustrators at her acclaimed blog, Seven Impossible Things Before Breakfast, a children’s literature blog primarily focused on illustration and picture books. The above blog was posted at 7-Imp on July 5, 2015