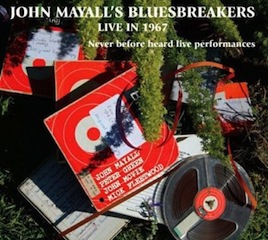 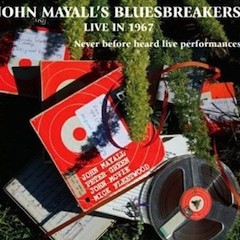 Much like Ronnie Hawkins before him, British blues icon John Mayall is better known in America for what he begat than for much of the fine music he’s made on his own a long running, fruitful career. Hawkin’s Hawks begat The Band, of course, whereas Mayall’s Bluesbreakers was a training ground for Eric Clapton and Mick Taylor and, briefly, teamed the principals of the first (and by some estimates the best) iteration of Fleetwood Mac when stellar 20-year-old guitarist Peter Green (aka “The Green God”), bassist John McVie and drummer Mick Fleetwood joined the Bluesbreakers lineup. Green and McVie are present and accounted for on Mayall’s 1967 A Hard Road album (a 2003 expanded edition also includes tracks with Fleetwood as well as—hey! Hey!—Paul Butterfield), but only now can all three be heard backing Mayall, thanks to the latter coming into possession of live recordings that had been stowed away for almost half a century.

At the John The Revelator website, we learn that at age 16 one Tom Huissen “swapped the quiet life of a Dtuch province town for the mad making turmoil of the West End, (and) bumped literally into this world of wailing Gibson Les Pauls and Marshall stacks. … After seeing the Bluesbreakers a couple of times Tom decided to cut short food and alcohol supplies in order to purchase a little Sanyo reel to reel tape recorder and a couple of tapes. From that moment he taped the band wherever and whenever he could, becoming friends with John Mayall and Peter Green in the process.” Live In 1967 documents portions of shows at five London clubs between February and May of 1967 in what is now the only recordings extant of this quartet’s brief history—after three months with Mayall, Green left to form the first Fleetwood Mac with McVie and Fleetwood in tow (the original lineup included guitarist Jeremy Spencer, with Bob Brunning the temporary bassist until McVie was ready to sign up). However Mayall got hold of Huissen’s tapes, get hold of them he did and thus began a meticulous restoration process with Eric Come of Forty Below Records. God bless Huissen for being resourceful enough to get his recorder into the clubs unimpeded and unnoticed. Who would fault him for audio quality on a par with a transistor radio of the time? Who would fault Mayall and Come for being able to clean up only so much of what they found on Huissen’s tapes? Amazingly enough, with Mayall’s vocals sounding so far away he seems to be in another room, along with the general hollowness around the rhythm section, Live in 1967 is still one smokin’ affair. On a strictly personal note, yours truly has heard legit live albums recorded with good mics, strategically placed by audio pros, that don’t speak nearly as clearly or forcefully as this one. However far away he may sound, Mayall’s singing, with its plaintive crying timbre, delivers emotional wallop when he needs it, and right from the start to boot, in opening the night with a tough attack on Otis Rush’s “All Your Love.” He has more than a few memorable moments on the blues organ, too, especially when he gets to stretch into some jazzy territory on a grinding, eight-minutes-plus exploration of textures and tones on Billy Myles’s “Have You Ever Loved a Woman,” a tune associated with Freddie King that Eric Clapton later made memorable on his own terms.

Green simply surmounts the poor recording quality. He sizzles and dazzles throughout, again and again cutting right through the murk. The precision and fire he brings to his furious soloing on Johnny Guitar Watson’s “Looking Back” is breathtaking, but so is the sensitivity and ache in his support of Mayall’s wounded vocal on Paul Marshall’s desolate “So Many Roads” (two years later both tunes would appear on Mayall’s seventh album, Looking Back, in the reverse order in which they appear here but also featuring exquisite Green solos). Green never disappoints, whether it’s with a whimsical solo on Tommy Tucker’s “Hi Heel Sneakers”; a probing, deep blue immersion in “Stormy Monday” at album’s end (at 8:54 it also includes an interpolation of Green’s “Black Magic Woman,” better known later as a huge Santana hit); or the howling tones and white heat of his invocations on Willie Dixon’s “I Can’t Quit You Baby.” But there is one big reason to own this album if you’re a blues guitar fan, and that’s for the master class Green gives in precision, tone, texture and pure, unadulterated feeling in an architecturally rich solo of more than six minutes’ duration on King’s “The Stumble.” It’s a jaw-dropper, an instant classic blues guitar moment, a LeBron triple-double in the Finals, Mantle’s 530-foot blast, the Immaculate Reception all in one majestic rush of virtuoso imaginative vitality. It’s also the moment when you can hear the real muscle in Fleetwood’s drumming, the sound signature that would become a hallmark of the post-Peter Green Fleetwood Mac’s superstar years. It’s no accident when it ends that it elicits shouts and applause so loud and forceful the audio fuzzes out (so glad Mayall left that in). On the A Hard Road album, Green staked his claim to the guitarist pantheon with his instrumental “The Supernatural.” Well, the shimmering vibrato, the sustains, the double-stops, they’re all there on “The Stumble,” which perhaps served as a template for “The Supernatural.” Regardless, it’s a moment to treasure, and makes a cool live album even more of a must-have item. Sounds great to me. 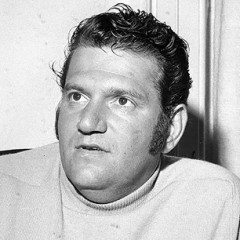 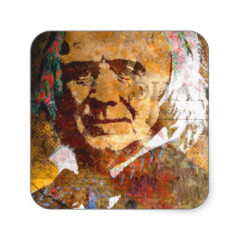 ‘A Man to Evoke Respect and Love Under All Conditions’