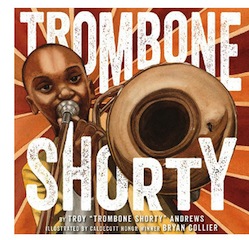 It’s the first Sunday of the month, which means I normally feature the work of a student or debut illustrator. I’m breaking 7imy own 7-Imp rules today, however, to … well, not do that–simply because I like this book and want to show you all some spreads from it. This won’t be on shelves till mid-April. Forgive me for posting about it a bit early, but hey, it’s already March! 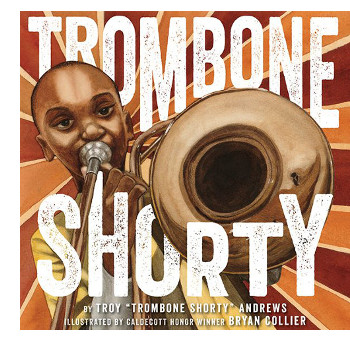 Trombone Shorty (Abrams) is the picture book autobiography from Grammy-nominated musician Troy “Trombone Shorty” Andrews. Illustrated by Bryan Collier, Andrews kicks the book off with “”Where Y’at?”, explaining that the folks in New Orleans have their own way of living and their own way of talking. Young Andrews grew up in Tremé, where “you could hear music floating in the air.” His older brother played the trumpet, and Andrews would watch and pretend to play his own. Andrews and his family would delight in the Mardi Gras parades, which “made everyone forget about their troubles for a little while.”

Andrews and his friends made their own instruments until the day Troy himself found an old, beaten up trombone. He joined a parade, his brother shouting, “TROMBONE SHORTY! WHERE Y’AT?” Thus a nickname was born.

Andrews goes on to describe the moment Bo Diddley called him out in a crowd at the New Orleans Jazz & Heritage Festival. Before he knows it, Andrews is on stage, playing with Diddley watching. The moment is illustrated, and in the backmatter readers are shown the actual photograph of this moment (two things I could show you today, but I’ll leave that for you to discover when you find a copy of this in April). “After I played with Bo Diddley,” Andrews writes, “I knew I was ready to have my own band.” Towards the book’s close, Andrews switches to present tense:

And now I have my own band, called Trombone Shorty & Orleans Avenue, named after a street in Tremé. I’ve played all around the world, but I always come back to New Orleans. …

I don’t think it’d be possible for there to be a better illustrator for this book than Collier. And he’s on fire here. “Collier portrays the story of this living legend with energy and style,” writes the Kirkus review, “making visible the swirling sounds of jazz.” It’s a feast for one’s eyes. Below are some spreads from the book.

(If you purchase this book, come April, a portion of the proceeds will be donated to the Trombone Shorty Foundation.)

Julie Davidson (Jules) conducts interviews and features of authors and illustrators at her acclaimed blog, Seven Impossible Things Before Breakfast, a children’s literature blog primarily focused on illustration and picture books. The above blog was posted at 7-Imp on March 1, 2015. She has been contributing blogs to this publication since May 2008, beginning with the second issue of our original incarnation as www.TheBluegrassSpecial.com. 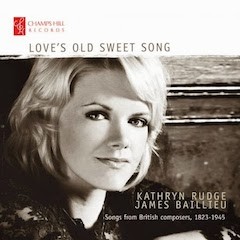