There’s something about deer.

I’m not sure if we can go quite as far as saying everybody loves deer. But I do think we can say there are at least as many people who love deer as ever loved Raymond.

And it seems something akin to a universal truth that when someone has a real-life encounter with a deer, planned or unexpected, the reaction involves plenty of swooning, and, sometimes, elbowing other people out of the way for a better look. Which doesn’t seem very deer-like.

But for many, even just seeing a deer on television, or the big screen, or online seems to trigger a giddy, weak-kneed response.

So, against that backdrop, The Dillie Phenomeon makes perfect sense.

Dillie is, well, a deer. A White Tail Deer, to be precise. Dillie lives with veterinarian Dr. Melanie Butera, and her husband, Steve Heathman at their Ohio home nestled on a sprawling plot of land, encompassing a barn and swimming pool.

‘She proves to me that every life is a gift’: A National Geographic profile of Dillie, heartwarming and moving, narrated by Dr. Melanie Butera

And when I say Dillie lives with them, perhaps I should be more explicit: The deer lives inside their home, and she has her own bedroom.

Moreover, in that bedroom, there is a webcam (the Dilliecam) that has helped turn Dillie into an international Internet sensation and major media figure. But I’m getting ahead of the story here. Let’s first sort out how Dillie entered the picture. And entered Butera’s home.

“I used to run an emergency clinic–that was our business til 2004—and a deer farmer brought her in at about two in the morning,” recalled Butera, whose practice was known to include treating wildlife, in an April interview on Talking Animals.

“She was three days old, she hadn’t nursed at all, and she was born blind. He raises bucks, so her being a doe—she was no value to his farm.

Mark Zinni, whose idea the Dillie webcam was, hosts a brief profile of Dillie for FOX 8 News (WJW) in Cleveland

Okay, that constitutes a decent opening chapter, but there’s clearly much more to this somewhat absurdist Dillie saga. (So much so, in fact, that Butera wrote a book, Dillie The Deer: Love On Hooves). For instance, Butera has explained here how Dillie ended up in her care, but not how the deer ended up residing in her home…with her own bedroom, no less. Heck, why not the barn?

“Well, we originally planned for her to be in the barn,” she said, “and my husband built an addition to our barn for her. But she was terrified of the horses. Terrified. And she would just run, in a blind panic, away from them. So we thought we’d better just keep her in the house, because she’s too little for this.

“She just started following our dog around, and became very dog-like, was housebroken, and one day we came in, and she was up on the bed with the dog—upstairs. She had taught herself to go upstairs. So it was quite an adventure of discovery for her, and for us, because every day there was something new she did that amazed us.”

In her book, Butera relates another notable example of Dillie doing something new that amazed them: One day, when the deer was a youngster, Heathen went for a dip in their pool, and the next thing he knew, Dillie was alongside him–deftly swimming laps.

In some ways, these surprises underscore a significant point—disclaimer, really—that Butera articulates in the book, on the Dillie The Deer website and every other opportunity that she can seize: Strongly recommending that people never try keeping a deer as a house pet.

These ongoing admonitions are driven by recognizing—and seeking to have others recognize–that the Dillie situation represents the confluence of multiple unusual factors (the runt of her litter, born blind, rejected by her mother, the man who owned the deer farm also didn’t want her, that Butera is a vey, there was no way to release Dillie into the wild, etc.), rendering it an absolutely singular scenario.

“It is a very unique situation,” Butera said. “And her partial blindness and her total lack of fear of us and the house are a big part of it, as well. Some deer, especially if they’re blind like that, are very, very skittish.

“But she was never like that. She climbed those stairs. She jumped on the bed–she jumped in the pool and swam. Nothing scares her that way. Strange dogs scare her, strange noises scare her. But in the house, she’s completely at ease.” 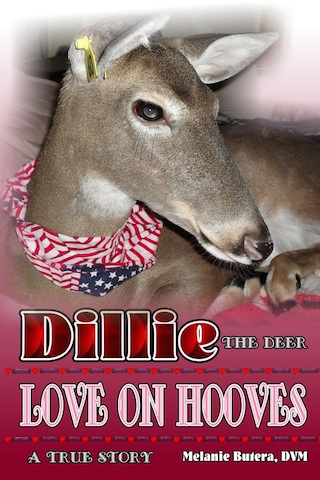 A partially blind deer that lives in a home, walks upstairs, goes swimming in the pool, hangs out with a dog on the bed, loves pasta, and does other remarkable things doesn’t seem likely to remain a well-kept secret.

Indeed, once word was out, the rise of Dillie’s profile was fast and furious.

“The way she got famous in the first place is that I had purchased a GPS collar for her for $99,” she recalled. “And my husband was complaining about the $99. When I went online to register it, [the company] had an announcement, ‘Enter a video on how you use your collar, and you could win $1000.’

“I thought, I’m going to win this, and that will show him, and that wlll shut him up about the $99. That’s truly why I did it. I put the video together, and Dillie won the contest….It was an advertising campaign, and they released it to the media, with a press release, around Christmas time.

“Well, the very next day, we had satellite trucks in our driveway. It all started from there. Mark Zinni, a local reporter with Fox 8 Cleveland, and a sweetheart, called me and said ‘We’re gonna make Dillie a star!’ I said, ‘What?’ He said, ‘We’re going to put a webcam in her room.’ I said ‘Are you crazy? People are going to tune in to watch her drool? That’s all she does.’  He was like ‘No, people will love it.’

Budgets of local TV news departments being what they are, Zinni wasn’t in a position to to outfit Dillie’s room with the computer and webcam equipment—Butera did that—but he was prophetic about the appeal of watching Dillie online.

With the Dilliecam in mind, I’m going to present two public service announcements. The first is to let you know that you can access the Dilliecam here.

What you’ll see may not strike you as scintillating. When she’s in her room, she’s typically on her bed, mostly lounging… or eating a meal…or munching on ice cubes (her favorite snack)…or standing up…or napping or sleeping…

Again, doesn’t sound like much. But maybe because it’s a deer—or, probably, because it’s Dillie—watching that webcam feed can become hugely irresistible and oddly compelling, somewhat hypnotic and surprisingly calming.

Which brings me to my second public service: To caution you that tuning into the Dilliecam can be intensely addicting. I know whereof I speak. There was a sizable stretch where I was logging on to the Dilliecam several times a day.

I found myself asking “I wonder what Dillie is doing right now?” And then I would check. The frequency and length of these checks kept escalating before I realized my Dillie –watching activity was occupying a bit too much of my life, undermining some of my professional and family responsibilities.

I’m kidding a little, but I wish I were kidding more. 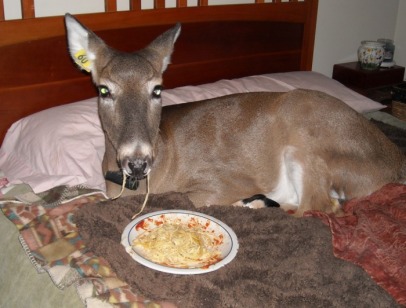 It helped that sometime she wasn’t in her room, or the webcam wasn’t live—nothing to see here, folks, keep moving–so I could immediately return to what I had been doing. Eventually, after trying to curtail my time with this deer, I concluded I needed to stop altogether, to go cold turkey (if that’s not a mixed metaphor).

OK, again, this is a wry exaggeration, but not by much. And while writing this column, I resumed watching the feed. It was like seeing an old friend, although the webcam was positioned in a different angle a few of the times I visited.

The Dilliecam does generate a powerful pull—people connect from all over the world, and one time when the webcam was on the fritz, Butera received an email from the International Space Station, inquiring if Dillie was all right.

Dillie, who’s pushing 10 years old, was all right. Which is not to say this home has gone untouched by illness or loss. Lady, the dog that Dillie made friends with when she was a baby, often sharing a bed and becoming very close cross-species companions, died last summer at age 17.

Lady’s death hit Dillie hard:. “The day Lady passed away, Steve buried her in the yard,” Butera remembered, her voice cracking. “Dillie went out and stood on that grave for four hours. Four straight hours. I finally said ‘Go out and get her, this is breaking my heart.’ “

Butera herself has had a brush with death. In fact, if you enter the Dillie World through the portal of Dillie The Deer: Love On Hooves, you find yourself reading a warm, casual account of the idyllic life with this sweet deer.

And then, just as you’re reaching the final pages, in the Epilogue—boom!—you learn Butera is seriously ill with cancer. It’s pretty jarring.

Whereas, if you were introduced to Dillie via a National Geographic video posted online in April to complement an article in the magazine about exotic pets, it’s revealed from the get-go that Butera had been diagnosed with Stage 4 endometrial cancer. (When the video was shot in August, she was on her 10th round of chemo.)

CBS News weighs in on the Dillie phenomenon

As of our Talking Animals conversation, the news is much, much better. “I’m good. I’m [cancer] free, as of six months ago.”

It seems that Butera’s medical news—the good, the bad, the ugly—has only seemed to deepen the emotional resonance of this story, at least among many of the Dillie faithful.

It appears that different folks feel a connection with Dillie for different reasons. Whatever the reason, it does seem meaningful—Dillie seems to speak to people in potent, poignant, often profound ways.

“We think about that a lot,” she answered quickly.  “We talk about that: ‘What is it?’ There’s so much love coming from her, that love of animals, that love of nature, love of each other, unconditional love.

“We always did call her Love on Hooves. That wasn’t just something we made up for the title of the book, that’s just always what we said. And that’s what people sense of her.

Click here to go to the Talking Animals featuring the interview with Dr. Butera. 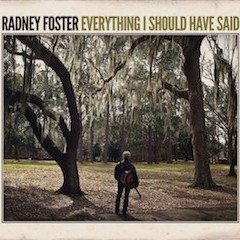