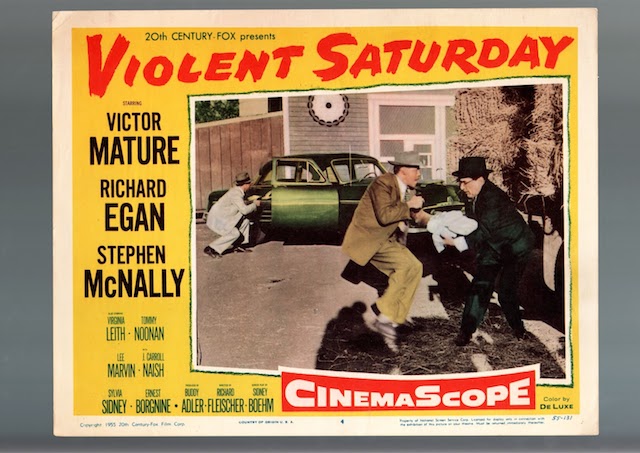 Screenplay: Sydney Boehm (from the novel by William L. Heath)

‘… Fleischer was firing on all cylinders, and Violent Saturday proves it…’

In the early 1950s, Daryl Zanuck, the founder of 20th Century Fox, decided that his studio was going to become the leader in filming and presenting their movies in Cinemascope, an anamorphic, ultra-widescreen lens technology that produced films in a 2.55.1 aspect ratio. Violent Saturday was one of the first films Fox planned to release under the Cinemascope banner, which they started using and licensing to other studios in 1953. One of the first films to successfully use the Cinemascope technology was the Disney classic 20,000 Leagues Under the Sea (1954), and director Richard Fleischer’s assured implementation of the Cinemascope technology (in his widescreen directorial debut, no less) got him a job at 20th Century Fox. His first assignment: Violent Saturday.

The film is a mix of two genres: film noir and small-town melodrama. While noir is known for its claustrophobic feel and black and white cinematography, and Violent Saturday shows off its lush, colorful widescreen production values, don’t be fooled–the film is noir at its core. Before Fleischer moved to 20th Century Fox, he worked as a hired gun for RKO Radio Pictures, cranking out minor but enjoyable B noirs such as The Clay Pigeon (1949), Follow Me Quietly (1949) and Armored Car Robbery (1950) as well as a genuine noir classic: The Narrow Margin (1952). By 1955, Fleischer was firing on all cylinders, and Violent Saturday proves it.

The film begins with the arrival of three would-be bank robbers in the small Southwestern town of Bradenville. But their arrival isn’t an instance of evil intruding upon innocence; plenty of corruption is already lurking just beneath the surface of this seemingly idyllic town. There’s Harry Reeves (Tommy Noonan), the voyeuristic bank manager who can’t stop stalking Linda Sherman (Virginia Leith), the pretty little nurse who happens to be nursing an attempted fling with Boyd Fairchild (Richard Egan), the alcoholic owner of the town’s copper mine. He doesn’t want to drink so much, but he can’t help it. His wife Emily (Margaret Hayes) has, as he puts it, “two or three hobbies a year,” her most recent hobby being the local country club stud, Gil Clayton (Brad Dexter). But that’s not all. There’s Elsie Braden (Sylvia Sidney), the purse-snatching librarian who steals to pay off her debt to Harry’s bank, and even the most functional family in town, the Martins, are dealing with the fact that their son is ashamed of his father Shelley (Victor Mature) because he isn’t a war hero like his best friend’s dad. The only seemingly decent people are the Amish family that lives miles outside of town, headed by Stadt (Ernest Borgnine, who won the Best Actor Oscar for Marty in the same year as the release of Violent Saturday). The complexity of the film’s intertwined characters and plotlines originates in the script, which was penned by veteran noir scribe Sydney Boehm. A quick look at his screenwriting resume–High Wall (1947), Side Street (1950), Mystery Street (1950), Union Station (1950), The Atomic City (1952), The Big Heat (1953), Black Tuesday (1954) and Rogue Cop (1954)–reveals that by the time he adapted Violent Saturday for the screen, he had mastered the art of the noir screenplay. The film could have collapsed under the weight of so many different plotlines, but Fleischer does a masterful job of weaving together Boehm’s multiple narrative threads. Fleischer favors long takes that can go on for minutes without a single cut, staging scenes in places like the town’s hotel bar so that he can move effortlessly from a conversation between a drunk Boyd and a sober Harry to the quiet observations of two of the bank robbers, Chapman (J. Carrol Naish) and Dill (Lee Marvin), then to some flirting between Boyd and Linda. The film takes its time setting up all of the different storylines, but Boehm and Fleischer tangle all of these characters together once the bank robbery gets underway, bringing the town’s corruption to the surface and proving that while heroism can exist, even Stadt, the most principled man in the film, will betray his beliefs when pushed past his limits (and in the process, provide the film with its most memorable image).

The performances in the film range from above average to excellent, with Lee Marvin as perhaps the best of the bunch–a bank robber with more to him than just a snarl and harsh word. In one moment, a kid bumps into him and knocks his nasal inhaler to the ground, then quickly bends down to pick it up, apologizing as he does. Dill crushes his hand with his foot, grinding it into the sidewalk, then finally lets him up only to shove him away, growling at him to “beat it.” But in another moment, late at night, Dill wakes up another one of the bank robbers because he can’t sleep and wants to quietly reminisce about his failed marriage. Marvin brings a multi-faceted complexity to the role and gives a great example of the early promise that launched his long and successful career. Not only are the performances solid, but the film also looks beautiful. Fleischer and cinematographer Charles G. Clarke take full advantage of the Cinemascope technology, presenting a film lush with color that consistently uses the widescreen frame to showcase the natural beauty of the American Southwest. The film was shot mostly on location in Bisbee, Arizona, and it shows. Throughout the film, Fleischer employs some interesting and effective camerawork, and noir aficionados will recognize a tribute to a particularly famous bank robbery scene from Gun Crazy (1950) as soon as it begins. While the melodrama aspects of the story sometimes threaten to overwhelm the film, Violent Saturday remains true to its noir roots, presenting a tale of a town in which the far-reaching presence and corrosive effects of corruption are significant and permanent. While the ending keeps the film from being a pure noir, the fingerprints of noir are all over it. It’s a true top-shelf film from a screenwriter and a director at the top of their games. If you haven’t already, see it. courtesy Film Noir of the Week [divider]

Donald Duck is enjoying a luxurious meal under a large portrait of his pioneering grandfather. The narrator notes that Donald’s life is significantly easier than that of his ancestor who had to hunt in order to survive. Donald then sees that hunting season begins the next day and, possessed by the spirit of his grandfather, decides to participate. When Donald arrives at the hunting grounds that evening, he finds it extremely overcrowded. Local residents go into hiding as vendors set up shop; the deer in the forest, represented by a cameo of Bambi and his mother, leave the area after seeing loads of litter wash downstream. The precise opening of hunting season that night unfolds in dramatic fashion. The scenes evoke stereotypical war films, depicting trench and tank warfare, amphibious landing craft, and hunters parachuting into the forest. At the end of the day, the discouraged hunters trudge home across a war-torn landscape. Yet the narrator notes that the day was “not without game,” as Donald’s grandfather presents a cow, taken from a local farm, which had the word “cow” painted on it so the hunters would not confuse it for a deer.

The film’s satirical presentation of recreational hunting was inspired by director Jack Hannah’s own experiences as a child. He once said, “I used to go hunting with my dad when I was a kid and this short was a great takeoff on these hunters and fishermen. They really are this way. They are as dangerous to themselves as to the game they’re hunting. I’ve heard there are more hunters shot on opening day than deer.” The film was directed by Jack Hannah and features original music by Oliver Wallace. It was produced in widescreen CinemaScope. Director Hannah recorded several voiceovers for the cartoon according to one interview. These included a moose who says, “Hmm, you’re a cute one.” According to Hannah, animator John Sibley, who worked on the scene, enjoyed the way Hannah spoke the line, and Hannah decided to record it himself. It is not known specifically which other voices Hannah recorded, yet several minor roles are uncredited. Clarence Nash, of course, provides the incomparable voice of Donald Duck. No Hunting was nominated for an Academy Award for Best Animated Short Film in 1956, but lost to the Merrie Melodies film Speedy Gonzales. It was the ninth and final such nomination received by the Donald Duck film series. 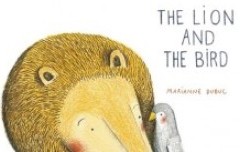 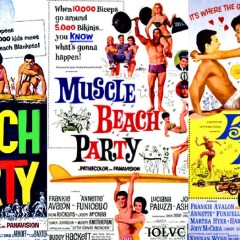