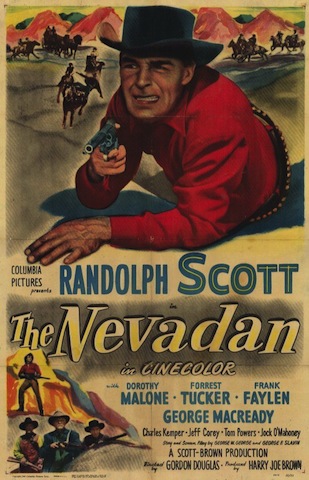 A fine early example of Randolph Scott’s long partnership with producer Harry Joe Brown (later known together as “Ranown”), which would result in iconic films such as Decision at Sundown, Ride Lonesome and Buchanan Rides Alone.

Here, Scott portrays Barclay, his usual mysterious lone rider, but he gets entangled in the company of others sooner and more completely than in later films. Forrest Tucker plays Tanner, an escaped convict with a hidden stash of gold, who commandeers Barclay’s assistance. George Macready (Galt) is a corrupt landowner, whose daughter (played by Dorothy Malone, Written on the Wind) is the first to size up Barclay when the stranger comes to town.

Another unique aspect of the independent productions of the Brown/Scott partnership was the use of less expensive and less established processes for shooting color films; The Nevadan was filmed in Cinecolor, a two-color process, which results in a unique color palette completely unlike the famous Technicolor process that was the standard for major color films from the era. Locations include the Alabama Hills of Lone Pine, CA, arguably the most famous location for movie and TV westerns apart from John Ford’s beloved Monument Valley. Many of John Wayne’s early Republic westerns were filmed here as were the legendary Budd Boetticher/Randolph Scott westerns, along with TV westerns such as The Gene Autry Show and The Lone Ranger. The Hills also stood in for British India in 1939 in the George Stevens-directed Gunga Din starring Cary Grant; in 2000 Russell Crowe, portraying Roman general Maximus Decimus Meridius in Gladiator, is seen riding a horse by the Alabamas (with Mount Whitney, the highest peak in North America, in the background) for a scene supposedly set in Spain. More recently, scenes from Star Trek Generations, Iron Man and Transformers: Revenge of the Fallen were filmed in the Hills. Fun fact: Frank Faylen, who plays Jeff, would achieve far more cultural clout in the late ‘50s and early ‘60s playing Herbert T. Gillis (“I gotta kill that boy; I just gotta kill that boy”), father of Dobie Gillis in the hit TV series The Many Loves of Dobie Gills.

United States Marshal Andrew Barclay (Randolph Scott) arranges the escape of outlaw Tom Tanner (Forrest Tucker) in order to locate the $250,000 in gold stolen by Tanner in stagecoach robbery. Tanner notices he’s being followed by Barclay, whose appearance suggests he is a greenhorn. Tanner ambushes Barclay and forces him to trade clothes and accompany him to a bank, where Tanner retrieves an envelope containing a map from a safe deposit box showing the location of the stolen gold.

On the road, Tanner and Barclay are stopped by two brothers, Jeff and Bart, who pull their guns and demand the map. To Tanner’s surprise, Barclay disarms the brothers and takes their horses. Later he explains that he is a fugitive just like Tanner and proposes that they work together as a team. That night, while Barclay is asleep, Tanner rides on without him.

The next day, Barclay stops at a ranch owned by beautiful Karen Galt (Dorothy Malone) and trades his lame horse for a fresh one. He continues on to the nearby town of Twin Forks, which is run by Karen’s father, Edward Galt (George Macready). At the local saloon, Barclay sees Tanner who pretends not to know him. Galt watches their exchange and later questions Barclay about Tanner’s stolen gold, which was never discovered following the robbery. When Barclay denies knowing Tanner, Galt orders his henchmen to beat him up.

Later that night, Tanner kills an intruder in his room. In an effort to force Tanner to reveal the location of the gold, Galt sets him up, making it look like cold-blooded murder rather than self defense. After being taken to jail, Tanner escapes with the help of Barclay after agreeing to share the gold. The two men ride out to the old Galt ranch, now used as a pasture for sick horses. When Karen discovers them hiding there, Barclay takes her aside and reveals that he is in fact a U.S. Marshal.

Meanwhile, Galt recognizes the escape horses used by Tanner and Barclay as belonging to his ranch. Later he questions his daughter about them, and she reveals Barclay’s secret, unaware that her father is after the gold himself. When Karen overhears Galt plotting with his henchmen, however, she realizes that Barclay’s life is in danger and rides to the hideout to warn him. One of Galt’s men follows her, however, and summons the others to the old Galt ranch. When they arrive, Karen meets them with gunfire, which gives Barclay and Tanner a head start on their escape.

Galt catches up with his daughter and has her put in custody while he and the others track Barclay and Tanner to an old mine shaft where Tanner has hidden the stolen gold. During the ensuing gunfight, Galt and his men are killed. Barclay reveals that Tanner was allowed to escape so that the gold could be retrieved. When the mine shaft caves in, Barclay overcomes Tanner and takes his prisoner back to jail. Karen knows he will return to her because he has left his horse in her care.

“8 Ball Bunny” is a Looney Tunes cartoon directed by Chuck Jones and written by Michael Maltese. It was animated in 1949 and released theatrically on July 8, 1950.

The Brooklyn Ice Palace shuts down after the Ice Frolics packs up to go to another show somewhere else, but during their departure, the Ice Frolics crew forget their star performer, “Playboy” Penguin. As Playboy attempts to catch up with the convoy of trucks, he accidentally falls into Bugs Bunny’s hole. At first, Bugs thinks he’s having a nightmare, but upon discovering what woke him up, he scolds Playboy for “crashing” into his slumber. Just as Playboy begins to cry, Bugs, now feeling guilty over his actions, apologizes to Playboy and, after finding out he’s lost, promises to help him get home. He then looks up Playboy in a book to discover he’s a penguin and that his “home” is the South Pole, much to Bugs’ shock.

To go down south, Bugs and Playboy hitch a ride on a freight train to New Orleans. Just as Bugs laments on making such a “big fat” promise, Playboy begins to cry again, but Bugs quickly apologizes saying he can’t stand to see penguins cry. A hungry vagrant, sharing their boxcar, states, “Me neither. Penguins is practically chickens.” and decides to make a meal out of Playboy. Bugs stands up for Playboy by pointing out he’s bigger than Playboy, so the hobo decides to turn Bugs into rabbit stew, but Bugs coyly trips and kicks the hobo. Just as the hobo runs to him, Bugs opens the door so that the hobo falls off the train, much to Playboy’s amusement.

Once in New Orleans, Bugs puts Playboy aboard a ship named Admiral Byrd, which he believes is going to the South Pole. Pleased with his good deed, Bugs decides to order a carrot martini at “La Bouche Cafe” and stay for Mardi Gras, which Bugs pronounces as “Madry Grass.” The stay, however, is interrupted when Bugs overhears from a captain and a sailor that the Admiral Byrd is bound for Brooklyn, New York–back to where the journey started. Realizing what he’s put Playboy into, Bugs swims out to catch up with the ship, rescuing Playboy from the ship’s galley, and swimming ashore to Martinique.

While Bugs strums a guitar and composes a ballad, Playboy is forced to build the boat. As Bugs is playing, Humphrey Bogart, only two years removed from his acclaimed performance in John Huston’s The Treasure of the Sierra Madre, shows up to begin one of the great running gags in the cartoon in which he repeatedly asks, “Can you help a fellow American down on his luck?”—one of the famous lines Bogart’s Fred C. Dobbs used in Treasure. Bugs throws a coin at him and says “Hit the road!”

After ten days at sea, Bugs is beginning to feel hungry, having not taken any food with them. Upon looking at Playboy, Bugs remembers the hobo saying “and penguins is practically chickens” and decides to eat Playboy, but immediately snaps out of his daze and apologizes to Playboy, just as he spots land. The land, however, is the Panama Canal and when the guard at the first lock demands a quarter for passage through, Bugs decides he and Playboy will continue the journey on foot.

As Bugs’ and Playboy’s route is traced out on a map of South America, they are soon captured by some natives and put into a huge stew pot, at which Bugs blames Playboy for getting them into that mess. Just as a panicked native comes in screaming “El bwana,” the natives immediately run away, panic-stricken. As Bugs wonders if the bwana is as dangerous as the natives made it out to be, the strange creature is actually Humphrey Bogart, who then asks Bugs to help him out again. Rather than berate him again, Bugs just gives him a coin for saving his skin and then he and Playboy resume their journey.

Bugs and Playboy’s route continues down through South America, with Bugs having to swing through trees, outswim a hungry crocodile, and scale a mountain in the Andes. Upon reaching Cape Horn, it’s a boat ride down to the tip of Antarctica, and then a journey on foot across the ice cap. When they finally reach the South Pole (depicted as a candy striped pole), Bugs angrily tells Playboy that he’s done his good deed and so now he’s going back home himself. Playboy then begins to cry again, his tears turning into ice cubes from the cold. His conscience nagging at him again, Bugs feels guilty and asks Playboy what’s wrong now. Playboy then takes out a flier from his hat, which tells Bugs that he was born in Hoboken, where the Ice Frolics’ main headquarters is, much to Bugs’ shock. 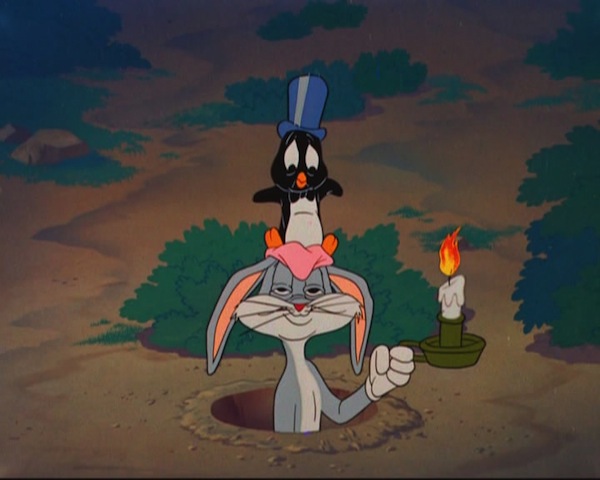 Just as Bugs is about to lose his mind over having to take Playboy all the way back, Humphrey Bogart appears again and starts to ask for Bugs’ help. Not wanting to go through what he’d been through with Playboy again, Bugs asks Humphrey Bogart to help him instead. With that, he thrusts Playboy into Humphrey Bogart’s hands and runs off, screaming insanely into the distance.

“8 Ball Bunny” is the second appearance of Playboy; his first appearance was in 1949’s Frigid Hare. The Bogart voice was performed by impressionist Dave Barry (no relation, of course, to the humor columnist).

While the film is introduced by the Looney Tunes music “The Merry-Go-Round Broke Down,” the opening card indicates a Merrie Melodies Blue Ribbon release with the 1959–1964 red rings, as does the end card, replacing the original green opening and ending sequences. 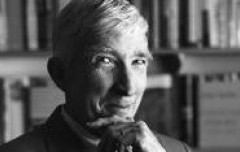