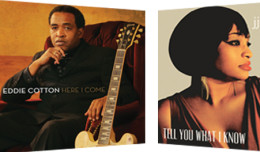 TELL YOU WHAT I KNOW

Multi-instrumentalist bluesman and former boxer Grady Champion (whose 2011 album Dreamin’ justifiably earned a rave review in the November 2011 edition of TheBluegrassSpecial.com) is expanding his horizons these days by founding his own label, DeChamp Records, and introducing it with two impressive albums of unvarnished blues, soul and classic R&B from Mississippi native Eddie Cotton and Detroit-born and –raised JJ Thames, a singer-songwriter well-versed in soul, gospel and blues, and a woman you do not want to cross.

Cotton’s DeChamp debut, Here I Come, is aptly titled to describe an artist whose growth as a writer-guitarist-vocalist remains on an upward arc on this, his third album (excluding a 2008 live album, Back In Mississippi: Live at the 930 Club, with Grady Champion). Cotton’s intriguing vocal style is from the cool school, even when he’s strutting some self-affirming advice on the order of the funky workout “Get Your Own,” propelled by his scratchy guitar and jittery rhythm attack. At times he bears an uncanny resemblance to the Spinners’ late, great Philippé Wynne—check out his sweet upper register in the soothing seduction “Here I Come”—and there are also moments when he’s channeling both Wynne and Curtis Mayfield at the same time (you’ll hear some of that when he speaks from the pulpit at the start of “Friend to the End,” an easygoing groove with an affirmative message of support and friendship, complete with Sam Brady’s gospel-ized organ humming softly underneath, a tasty backbeat courtesy drummer Samuel Scott, Jr., and Cotton’s own steady electric guitar).

‘Here I am, still on a mission/so determined to complete my vision’: Eddie Cotton, the title track from Here I Come

In “Friend to the End” Cotton shouts, “I’ve got a message,” and he proves that in other songs as well, counseling self-reliance in the face of everyday slights the world serves up on the abovementioned “Get Your Own,” and in “Here I Come” he assures his interlocutor, “sometimes in a fight you get knocked down/but when the dust clears, I’ll still be around.” Being a nominally blues artist, Cotton has some things to say about love–in the strutting “Leave Love Alone,” with Grady Champion interjecting some honking harmonica flourishes, he opines, “when love gets ahold of you/ain’t nothin’ you can do,” as a setup to announcing his intention to stay in the game; in “A Woman’s Love,” all sultry, grinding ambiance accented by Cotton’s piercing guitar solo, he takes strength, when “every day is such a trial,” from knowing his woman’s behind him, even when “things don’t go my way.” In the Impressions-like “No Love Back,” a slinky, gospel-tinged backdrop is the stage for Cotton’s philosophical musings on matters of the heart, as he digs deep to produce a soulful truth on the order of “I’m here to testify…that love don’t come with no love back guarantee/it will make no exceptions now for you and me/if you dearly love long enough, then you’ll see/love don’t come with no love back guarantee.”

If Eddie Cotton’s is the politics of conciliation and compassion, JJ Thames’s is the politics of confrontation and conflagration, a truth at least hinted at in the very title of her album, Tell You What I Know. It begins on quite a different note, though, from what the rest of the album offers. In the chilling gospel cry “Souled Out,” a group of chanting female singers (who turn out to be the titular artist, multitracked) hum ominously through the entire track as Ms. Thames moans, grunts, growls and howls a mighty spiritual entreaty to the Lord for sustenance while she tells her story of “chasing my dream” from Motown to Mississippi, revealing along the way some wrenching personal details (unless my ears deceive me, one lyric mentions “my baby that died”). Despite the vocals being underpinned by a soft, discreet drumbeat, handclaps and on-the-downbeat tambourine, the voices are so powerful and so resonant of hard times and backbreaking striving as to seem a cappella. At the end the singer sounds completely drained as she snaps off a repeated “souled out, souled out, souled out” while the track is fading to make way for the stomping hard blues of “Hey You.” As that track and the next nine unfold, Ms. Thames’s references to her autobiography multiply, seem to inform just about every song, in such a way you begin to think “Souled Out” is really, or was really, intended as the album’s final track. As the opening cut, though, it establishes less a linear narrative than one freed from the bondage of time, jumping back and forth through episodes of her story more important for what they reveal or for what she learned than for when they actually happened. If this be the case, the aggrieved JJ Thames we hear at the outset is simply reflecting the bone-deep spiritual weariness arising from battling some serious personal issues, especially those involving the male of the species—and not necessarily those falling under the banner of “love interest.” Consider, for example, the abovementioned “Hey You.” This brutal, relentless stomp finds Ms. Thames fed up with a dawdling man, beseeching him, “don’t just stand there/make a move.” It goes on, even to the point of the singer almost mocking the male in question, harrumphing in a cocksure manner, “Standin’ there, mouth hangin’, aw sugar, you’re amazed” and then informing him, “see my daddy, pimp turned preacher, I was raised to play this game/there’s no need for pickup lines/I know ‘em all anyway…” At which point him making a move seems kind of irrelevant, no? Not in the face of certain daddy issues in play.

JJ Thames, ‘Hey You,’ from Tell You What I Know

Which is not to suggest the woman in question lacks a tender side—she just has certain parameters that must be met. “I Got What You Need” glides in on a sexy wash of southern soul horns out of Memphis and Muscle Shoals before the singer enters with a seductive invite to sensual pleasures, to which is appended a cautionary advisory in a no-nonsense growl, to wit, “I need a strong man, to rock me all night long…I need a big ol’ strong man…,” which of course leads to a conditional come-on: “If you’re that many, honey,” she drawls sexily, “I might be willing to take you home…” It’s a grooving track, replete not only with those exquisite horns but also enhanced by producer Sam Brady’s cool organ deep in the mix and a tasty, thick-toned chromatic harp solo from Grady Champion himself. To set the record straight she offers up “My Kinda Man,” a silky, Philly Soul-flavored communiqué with her satiny multitracked voice backing up her restrained, nuanced vocal explaining the bottom line about anyone she might be “willing” to take home: “…wakes up early every morning, works hard with his hands/no big titles, fancy cars, but Lord knows I’m proud of my man/keeps food on the table, naw, he don’t say much/but when he looks me in the eye, I tremble…’cause it’s my man…my kind of man…”

Trained in classical and jazz singing from an early age (nine), Miss JJ exhibits none of the dulling formality that can come with those styles when learned in a classroom setting but does demonstrate the vocal versatility she’s developed as a result of those studies. The engaging precision of her singing style is affectingly balanced by the sheer go-for-it bravado in her attack, especially when she calls on her gospel roots for a telling flourish, whether she’s tackling a tough blues-rock number such as “Just Enough” or digging in, surrounded by surging horns, Sam Brady’s bluesy piano and chanting background voices (again, all hers), to deliver fresh outrage to Ray Charles’s “I Believe to My Soul” (the only cover amidst all the other JJ originals), a tale of romantic deception that cuts deep precisely because Ms. Thames remains so in control of her emotions even as it’s clear she’s both wounded and fuming.

The album’s real last track, “Tell You What I Know,” is nothing less than a chronicle of her own tough road from there to here remarkable both for the hard times she describes and the track’s seamless segue from a lush soul feel to house wrecking gospel fervor along with Ms. Thames’s equally seamless segue in vocal attacks. Tell you what I know: JJ Thames brings it on her new album, with no wasted effort, a heart full of soul and an unambiguous sense of herself. If she’s willing to take you home, you better go. 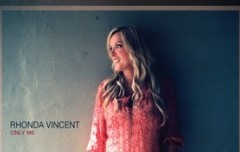