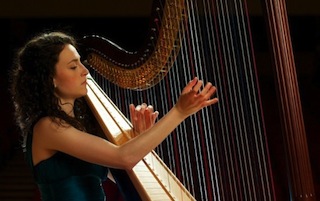 British composer and violist Sally Beamish’s acclaimed harp composition Awuya has been given a superb new treatment by innovative harpist Anne Denholm as captured on film by Laurie Irvine.

Nearly nine minutes in length, Awuya celebrates the major research carried out in the field of African sleeping sickness by Professor Keith Vickerman of Glasgow University. The original version of Awuya, commissioned by Glasgow University to mark Prof. Vickerman’s retirement, had its debut performance, by Louise Vickerman, at the University on January 1, 1998.

The work is inspired by the mutation of the deadly trypanosomes that are transmitted by the tsetse fly and cause the disease on which Prof. Vickerman’s work is focused. Awuya uses the powerful emotive language of music to express the tragedy of sleeping sickness and the promise scientific endeavor holds for eradicating the parasitic illness.

Along with African drumming rhythms, Ms. Beamish’s composition employs a pentatonic harp used by a central African tribe and the tune of a lullaby from a central African tribe decimated by sleeping sickness in the 1940s. The lullaby’s original words, sung to a little girl called Awuya, frankly address the disease’s impact on Awuya’s mother:

Awuya, eh, your mother does nothing

She crushes no ground nuts and draws no water

Neither to catch fish nor to look for snails.

African drumming rhythms introduce the music, which proceeds to change “color,”  a la the trypanosomes’ changing coat. This is followed by the lullaby tune, then more “color” music. Following the first statement of the lullaby the changes are more muted, setting the stage for the lullaby to return with a more upbeat flourish. Ending optimistically, Awuya’s hopeful tune is meant to suggest that the changing trypanosomes can be controlled and the disease conquered.

In her new film, Laurie Irvine has incorporated these ideas, enhancing a powerful performance of the Beamish composition by Welsh-born Ms. Denholm, who studied at The Purcell chool of Music, Cambridge University and the Royal Academy of Music. In addition to performing widely as a chamber and orchestral musician, as a soloist she has won numerous prizes in local, national and international music festivals, including second place in the Texaco Young Musician of Wales 2009 competition and as a string category finalist in the BBC Young Musician 2010 competition. In June 2013, Ms. Denholm was awarded the Cambridge University Donald Wort Prize for the highest final recital mark. 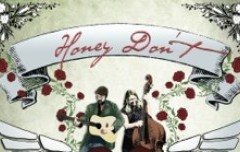