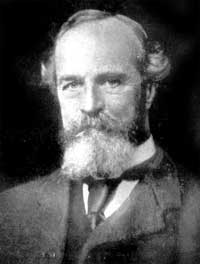 In December of 1882, while visiting Paris, distinguished psychologist William James received word from his family in the U.S. that his father’s ill-health had further deteriorated. Almost immediately he traveled to England in a bid to return home, only to find that his brother, Henry, had already left his London home for New York. As he awaited further news, William wrote the following letter—a beautiful farewell that arrived a day too late. It  was subsequently read aloud by Henry at their father’s grave.

Two letters, one from my Alice last night, and one from Aunt Kate to Harry just now, have somewhat dispelled the mystery in which the telegrams left your condition; and although their news is several days earlier than the telegrams, I am free to suppose that the latter report only an aggravation of the symptoms the letters describe. It is far more agreeable to think of this than of some dreadful unknown and sudden malady.

We have been so long accustomed to the hypothesis of your being taken away from us, especially during the past ten months, that the thought that this may be your last illness conveys no very sudden shock. You are old enough, you’ve given your message to the world in many ways and will not be forgotten; you are here left alone, and on the other side, let us hope and pray, dear, dear old Mother is waiting for you to join her. If you go, it will not be an inharmonious thing. Only, if you are still in possession of your normal consciousness, I should like to see you once again before we part. I stayed here only in obedience to the last telegram, and am waiting now for Harry—who knows, the exact state of my mind, and who will know yours—to telegraph again what I shall do. Meanwhile, my blessed old Father, I scribble this line (which may reach you though I should come too late), just to tell you how full of the tenderest memories and feelings about you my heart has for the last few days been filled. In that mysterious gulf of the past into which the present soon will fall and go back and back, yours is still for me the central figure. All my intellectual life I derive from you; and though we have often seemed at odds in the expression thereof, I’m sure there is a harmony somewhere, and that our strivings will combine. What my debt to you is goes beyond all my power of estimating,—so early, so penetrating and so constant has been the influence. You need be in no anxiety about your literary remains. I will see them well taken care of, and that your words shall not suffer for being concealed. At Paris I heard that Milsand, whose name you may remember in the ‘Revue des Deux Mondes’ and elsewhere, was an admirer of the ‘Secret of Swedenborg’, and Hodgson told me your last book had deeply impressed him. So will it be; especially, I think, if a collection of extracts from your various writings were published, after the manner of the extracts from Carlyle, Ruskin, & Co. I have long thought such a volume would be the best monument to you.—As for us; we shall live on each in his way,—feeling somewhat unprotected, old as we are, for the absence of the parental bosoms as a refuge, but holding fast together in that common sacred memory. We will stand by each other and by Alice, try to transmit the torch in our offspring as you did in us, and when the time comes for being gathered in, I pray we may, if not all, some at least, be as ripe as you. As for myself, I know what trouble I’ve given you at various times through my peculiarities; and as my own boys grow up, I shall learn more and more of the kind of trial you had to overcome in superintending the development of a creature different from yourself, for whom you felt responsible. I say this merely to show how my sympathy with you is likely to grow much livelier, rather than to fade—and not for the sake of regrets.—As for the other side, and Mother, and our all possibly meeting, I can’t say anything. More than ever at this moment do I feel that if that were true, all would be solved and justified. And it comes strangely over me in bidding you good-bye how a life is but a day and expresses mainly but a single note. It is so much like the act of bidding an ordinary good-night. Good-night, my sacred old Father! If I don’t see you again—Farewell! a blessed farewell!

Source: The Oxford Book of Letters