CHRISTMAS AT THE OASIS

If you’re seeing this and thinking, I didn’t know Maria Muldaur ever recorded a Christmas album, well, welcome to the club. The background here is that Christmas at the Oasis, recorded live at a 2010 show at San Francisco’s now-defunct Rrazz Room, was recorded for broadcast locally as part of a Christmas special. Ms. Muldaur never had any intention of recording a Christmas album (see her own notes below), but the producer kept nudging her, telling her how good the set was, and when she listened back, her reaction was, as she told Dan MacIntosh of Songfacts, “‘Oh, my God, that sounds fantastic.’ I have this stellar jazz band that I work with up here, and they were just smoking. And so finally I was pressured and persuaded on all sides to release it. So we did. I mean, we just went in there and tried to clean up the sound a little bit.”

An album could hardly have been lower profile than this. Initially available only at her live dates, it was then offered only on her website. Now, however, it’s available on Amazon as a manufactured-on-demand CD-R—whatever it takes to get it into wider circulation, because it’s one grand, swinging affair, as rollicking a Yuletide celebration as one could ask, with our gal cutting loose in splendid, attitudinous voice throughout and a powerhouse band kicking it behind her on some vintage holiday fare, including three chestnuts most associated with Louis Armstrong, as well as some evergreens from some of the female blues singers of yore she admires so much.

From Christmas at the Oasis, Maria Muldaur’s take on Eartha Kitt’s ‘Santa Baby’

But first, here’s what the lady of the hour has to say about this project in her liner notes:

Year after year, as the holidays approach, we are all inundated endlessly on every side by an onslaught of the same old sentimental, sappy, overdone, pedestrian Christmas tunes. Over the years, as an antidote to that, I have collected and enjoyed some wonderfully hip, swinging, humorous, irreverent Christmas songs by some of my very favorite artists in the

Many people have delighted in these tunes and have suggested I record them on a Christmas album of my own, but for years I resisted the idea, as I saw just how very many artists of every stripe put out Christmas albums, and had decided that I would be the one artist on the planet who didn’t release a Christmas album!

Last year, much to my utter astonishment, an artist I consider to be the Hippest of the Hip, The King Of Cool, Bob Dylan, came out with his very own Christmas album, Christmas In The Heart, the proceeds of which were donated to the charity, Feeding America. “Now, there’s a cool idea–and a swell gesture,” I thought. But still, I resisted the idea. The second event was a Christmas concert I gave with my stellar band of top-notch Jazz musicians, which was recorded at The Rrazz Room in San Francisco for a special Christmas TV broadcast. The evening exceeded my every expectation. The band was rockin’ and swingin’ so hard, we all had a great time, and the audience just loved it! Many of them asked if a CD of the music they had heard would become available.

So……after hearing all the wonderful, spirited music on our live Christmas recording, and being urged on every hand to consider releasing our performance as a live Christmas CD, I finally succumbed, and have thrown my hat (my Santa hat!) into the ring, deciding at last to leave the lonely outpost of being the only artist on the planet without a Christmas album, and finally join the fun, and all my fellow artists, with a Christmas release of my own! We had a ball making this music and hope you will enjoy this refreshing collection of Christmas tunes throughout the Holiday Season!

‘Sleigh Ride,’ Maria Muldaur, the swinging instrumental opener from Christmas at the Oasis

Indeed! She lets the band take charge at the outset with a Dixieland-tinged romp through Leroy Anderson’s “Sleigh Ride,” the first of many moment when musical director Jim Rothermel enlivens the proceedings with his lively clarinet solos aided and abetted in his efforts by the lively guitar work of Jeff Massanari. This sets the stage for Maria’s entrance with “Boogie Woogie Santa Claus,” wailing “Well, lookee here, Jack, comin’ down the track, he’s got a rhythm in his feet, but nothin’ in his sack…he’s a boogie-woogie Santa Claus…” Yes, it’s Mabel Scott’s rousing 1948 take on Kris Kringle’s modus operandi in which Muldaur’s swinging vocal over the brisk shuffle beat is complemented by Massanari’s hot picking (funny guy, he even interpolates a snippet of “Jingle Bells” as he surges ahead) and a terrific bluesy fusillade on the 88s from John R. Burr. A lowdown “Christmas Blues” follows, with Rothermel setting the stage with his bluesy clarinet before Muldaur enters singing a low down “the merry bells are ringing today/but they don’t mean nothin’ to me/I hear the children playing today/but I’m as blue as I can be/ol’ Santa Claus forgot my address/that is something I can plainly see…” before the whole shebang jets into an overdrive Kansas City blues originally crafted by Jay McShann as “No Money No Honey.” Muldaur’s tackled this one before, on a 2000 Stony Plain compilation, Stony Plain’s Christmas Blues, backed by the Duke Robillard Band, but she’s even more freewheeling in her attack here and the band is right there with her. And for all the despair in McShann’s lyrics, Muldaur and company have a party with it.

Anyone who’s followed Muldaur’s career knows of her sense of history, which is in full flower here. She may have been averse to the idea of cutting a Christmas album, but when she took the plunge (even if it didn’t start out as an album project, per se) she was going to pay homage to the tradition in her own way. “Sleigh Ride” is one example but that’s the band only. She offers a slinky, seductive “Santa Baby” (with a reading of the sentiment “think of all the fellas I haven’t kissed” that would surely impress Miss Eartha Kitt) during which Massanari crafts a an equally salacious guitar solo; a take on Charles Brown’s “Merry Christmas Baby” that has levels of sensuality and longing even its author and its otherwise most famous interpreter, one Elvis Presley, didn’t plumb, aided and abetted by Rothermel’s lusty alto sax and moody solos from Massanari and Burr; like “Sleigh Ride,” “Winter Wonderland,” which dates back to 1934, is an occasion for the band to bop through a delightful theme-and-variation attack, led by Rothermel’s sax but with equal time for Massanari and Burr to fashion fanciful statements of their own as well. She goes back to what is generally acknowledged to be the start of the blues Christmas tradition with a swaggering, multi-textured take on “At the Christmas Ball,” introduced in 1925 by Bessie Smith.

Armstrong’s “Zat You Santa Claus” elicits a comical treatment with Muldaur vocally trembling at the thought that her late-night visitor might be someone other than Kris Kringle as the drums and sax heighten the element of danger lurking nearby. Two other Armstrong-associated tunes are occasions for the singer and her band to swing free and easy, “Yule That’s Cool” and “Christmas Night in Harlem,” and it could be argued that the delight the musicians take in these—from the way Muldaur plays with the lyrics and the soloists frolic through their spotlight moments—lends these performances a special buoyancy—and for good measure, add to these treats the jumping jive the dramatis personae deliver on Louis Prima’s “What Will Santa Claus Say.”

‘Gee Baby Ain’t I Got to You, Maria Muldaur, from Christmas at the Oasis. First recorded in 1929 by McKinney’s Cotton Pickers and later given a parody treatment by the Even Dozen Jug Band, when Ms. Muldaur was a member thereof, this version honors the 1948 Nat King Cole treatment, which was given a lyric tweaking by Duke Ellington collaborator Andy Razaf. Dig Jeff Massanari’s tasty guitar solo and the bluesy musings on piano by John R. Burr.

For her long-time fans, Muldaur has a couple of special treats. Those that go back with her to the Even Dozen Jug Band days may remember a holiday parody that scintillating bunch did with the Don Redman-penned tune “Gee, Baby, Ain’t I Good to You,” first recorded in 1929 by McKinney’s Cotton Pickers. With a little lyric tweaking by Duke Ellington collaborator Andy Razaf, Nat King Cole cut it during his first session for Capitol Records in 1943 and in ’44 it followed Cole’s first hit, “Straighten Up and Fly Right,” onto the national charts. Muldaur doesn’t reprise the Jug Band parody here but simply digs into the tune’s deep lovestruck blues in a tender, medium-cool smoldering style with plaintive, atmospheric soloing by Rothermel (clarinet), Burr and Massanari enhancing the yearning mood. And then there is the title track, an on-the-spot rewrite of her breakout hit, the David Nichtern-penned “Midnight at the Oasis,” given a suggestive Yule twist—“let’s slip off to the North Pole…real soon…and kick up a little snow”—in which the camel is supplanted by Rudolph (“our friend…he’ll light up the way…come on, until the evening ends, ‘til the evening ends”), although she does retain, “I’ll be your belly dancer, prancer/and you can be my sheik…,” presumably because, well, prancer fits, doesn’t it? Who knew?

If Maria Muldaur simply had to be the last person on the planet to release a Christmas album, at least she made the wait worthwhile. Christmas at the Oasis is an instant swinging seasonal classic. Hey Maria! Have a Yule that’s cool! 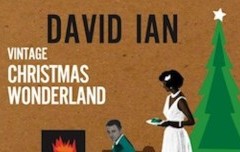