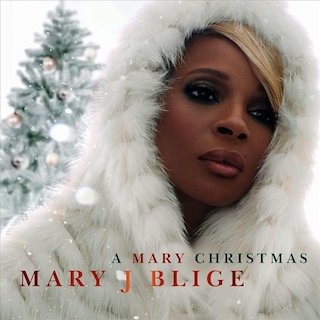 Some folks have expressed surprise that nine-time Grammy winner Mary J. Blige would release a Christmas album. She has had, after all, a rather rough reputation, at least early on in her celebrated career, when she fussed and feuded with the press and generally emanated a vibe of not being especially sympathetic to the concept of “upon earth peace, good will toward men.” She began rolling all that back in 2003 when she met music executive Kendu Isaacs, who challenged her to turn away from the destructive things (alcohol, cocaine) and manipulative people in her life and learn to value herself. “You’re beautiful,” he told her, which made him “the first man to ever tell me that,” she said. They married, she became stepmother to his three children, and in 2005 she released her revealing seven-times platinum album The Breakthrough, which won three Grammys but more tellingly signaled the flowering of a mature sensibility that’s shown up in her public comments reflecting on the pain she lived with from growing up with an abusive father and alcoholic father and how her rebellious, anti-social behavior was all a reaction springing from her deeply embedded self-loathing. (None of this adequately explains, however, the investigation begun in 2012 of her charity, The Mary J. Blige and Steve Stoute Foundation for the Advancement of Women Now [FFAWN], for a host of financial misdeeds ranging from loan defaults, missing money, bounced checks issued to musicians that participated in FFAWN’s 2011 fund-raising gala and a tally of unpaid taxes that would make Willie Nelson’s head swim. The New York Post called her “a deadbeat diva.”)

‘My Favorite Things,’ Mary J. Blige, from A Mary Christmas

Even if the personal growth she’s spoken of remains nascent, there’s no doubting, or faking, the feeling she puts in her music—those millions of fans that have been buying her albums since her 1992 debut haven’t been buying her celebrity; they’re moved by a voice with deep roots in classic soul, gospel and R&B and the intense personal commitment she makes to her lyrics. These attributes are in abundant evidence on A Mary Christmas, which is nothing less than far and away the best new Christmas album of a strong 2013 season. Its template is Aretha’s first Christmas album (not her most recent, rather disastrous one), onto which Ms. Blige projects her own indomitable personality and au courant style.

She’s no stranger to these carols and traditional seasonal songs; in fact, she has a brief but impressive track record in this niche, dating to her pleasant but unchallenging contribution to 1999’s anthology A Very Special Christmas 3, “Christmas in the City,” with rapper Angie Martinez, and a far more impressive turn that same year on another multi-artist anthology My Christmas Album, with an impassioned reading of Stevie Wonder’s socially conscious “Someday at Christmas” (a gripping vocal that would not be denied, despite the song’s clunky, distracting hip-hop arrangement). Even more dramatic, she made an ethereal guest appearance dueting with Andrea Bocelli on a sumptuous treatment of “What Child is This” on the latter’s 2009 holiday album, My Christmas, which was produced by David Foster, who crafted a scintillating arrangement for this song in blending grand orchestral flourishes with a tender Spanish guitar interlude. Foster knew what he had in Ms. Blige—he had produced her once before, in a fevered duet with Rod Stewart on “You Make Me Feel Brand New” for Rod’s smash 2009 album of classic ’60s soul covers, Soulbook. Small wonder, then, that Stewart and Foster would bring her back in 2012, this time for a majestic orchestral rendition of “What Child Is This” on Rod’s platinum-certified Merry Christmas, Baby long player.

‘Have Yourself a Merry Little Christmas,’ from A Mary Christmas

Well ahead of being named chairman of the Verve Music Group in 2011, Foster had fashioned one of the most daunting resumes in modern music history. Although he’s had a productive solo career (no less than 12 albums on his own and as a member of the groups Skylark, Attitudes and Airplay), he’s made his mark most decisively as a producer of more hit records by more artists than you care to count. When an artist hires Foster, presumably the artist knows what he/she is getting—although he very likely could craft a compelling chamber music album, his trademark productions generally feature full orchestras in full glory—a Rolling Stone writer (no, not yours truly) once dubbed him the “master of bombastic pop kitsch,” a not entirely unfair appraisal, but it doesn’t give him credit for the wit and sensitivity he’s shown in many of these full-blown outings (such as the abovementioned Spanish guitar adding a touching, reflective moment to “What Child Is This”).

Mary J. certainly knew what she was getting when she teamed with Foster on A Mary Christmas, and she thrives in the expansive settings he creates in helping her find her own place in mostly familiar holiday fare, the reverent and the playful alike. She and Foster strike an ongoing musical theme at the outset with an arrangement of “Little Drummer Boy” that meshes distant, dramatic orchestral thunder and soft, surging strings with subtle hip-hop percussion as Mary gospelizes the lyrics with an intense, urgent delivery, complete with a few improvisational sorties around the melody line, as a full-voiced choir rises gloriously behind her. I’ve heard a lot of “Little Drummer Boy” recordings in my life, but nothing quite as riveting as this in which a singer makes every verse sound like something’s at stake by the sheer force of commitment to making the narrative a personal statement. During sequencing someone must have known that listeners would need a breather after the “Little Drummer Boy” juggernaut, and so we get a luscious treatment of “Have Yourself a Merry Little Christmas,” with some tasty Rhodes embellishments from Foster, a warm, soft bass line from Alex Al, romantic strings and a tour de force vocal from Mary with alternately smoldering and intriguingly fervent Aretha-style gymnastics, as if she’s suddenly doubting whether her intended listener is actually getting the message. On Rogers and Hammerstein’s “My Favorite Things,” she and Foster treat it as a torch song at the outset, opening with only his piano backing her soft, wistful vocal. Eventually the tension rises, as does the orchestra, and you wish Foster had kept everything reigned in so that Mary could continue her melancholy probing, which was aimed, for all intents and purposes, at remaking  the song; but in the context of her own life, her following the lyrical trail to the point where she discovers the power of her memories to make herself whole (as the orchestra cuts loose around her) makes the song sound like something she’s living right now.

Donny Hathaway’s “This Christmas” retains its original jazzy template, as do most versions, but Mary works a vocal variation on the traditional readings of it with a buoyant, freewheeling vocal later in the song, and Foster adds to the festive ambiance with a cool, Brubeck-like piano solo that is as unexpected as it is delightful. Similarly, no one wants to mess with “The Christmas Song (Chestnuts Roasting on an Open Fire),” so everyone plays it straight early on, and Mary makes the most of the moment with a sweet, dreamy vocal as the strings sing softly in the background. Much as Foster’s piano did in “This Christmas,” though, “The Christmas Song” boasts its own memorable, if fleeting, instrumental punctuation in the form of Andreas Varady’s reflective, rich-toned hollow-body guitar solo and thereafter follows Mary’s romantic crooning to effect a cozy musical embrace at song’s end. Maybe no one messes around with “The Christmas Song,” but “Rudolph the Red-Nosed Reindeer” is another story, and here Blige and Foster kick things into overdrive with a roaring big-band arrangement—horns blaring and pumping, drums in full-on sprint, an alto sax wailing—and Mary improvising, scatting and shouting like Ella Fitzgerald right up to the big, boisterous final chordal blast. You don’t even have to listen close to hear her chuckling when it’s all over, and then she exclaims, “Man, that was fun!”

Arguably the album’s most powerful performance here, “Mary, Did You Know,” is at its best when it’s most austere, when Ms. Blige’s emotional vocal, full of wonder and humility, is supported only by Foster’s spare, acoustic piano and Jochem van der Saag’s quiet synths. A brief  orchestral outburst three-quarters of the way through disrupts the spell only momentarily, as the song quickly resumes its more deliberate pace with Mary bringing measured gospel intensity to a haunting final verse that ends with her moaning, “Oh, Mary, Mary, Mary, did you know?” ahead of a lonely violin crying after her.

‘Mary, Did You Know,’ Mary J. Blige, A Mary Christmas

Mary J. Blige and the Clark Sisters, ‘The First Noel,’ from A Mary Christmas

Duets are part of the program here as well. “When You Wish Upon a Star” is the beneficiary of a big, string-heavy Foster orchestral arrangement setting up Mary to enter with a cheery tone on the first verse (and sounding for all the world a lot like Diana Ross on the Supremes’ Christmas album); as the arrangement settles comfortably into a gentle  shuffle, she sets up a spectacular performance by Barbra Streisand before the two voices join together in the chorus, and then proceed to trade phrases the rest of the way, harmonizing on the chorus, and finding one Chris Botti joining in late with some atmospheric trumpet cries. “Do You Hear What I Hear?” teams Mary with the unconventional British singer-songwriter Jessie J in an occasionally hard-edged arrangement with a rather jarring electropop interlude, but it’s gone in a flash and the two singers wind up delivering an engaging, respectful tête-à-tête while awash in luxurious strings. With Marc Anthony, Mary offers a reverent bilingual rendition of “Noche De Paz (Silent Night),” an impassioned performance with two voices beautifully meshing and Ramon Stagnaro’s lovely Spanish guitar shadowing them. And for an outing so invested in gospel as this, it’s only fitting that Ms. Blige would call on gospel icons The Clark Sisters to bring the call-and-response heat and simmering harmony singing to a grooving rendition of “The First Noel” straight outta the church.

‘The way I get to the point of making you believe that it’s Christmas is going back to Christmas as a child, becoming that child again, remembering what was going on when we were decorating the Christmas tree and what song was playing and how it made me feel. Mary J. Blige on the genesis of A Mary Christmas.

Mary J. Blige and producer David Foster on the personal side of A Mary Christmas

In a promotional video, Ms. Blige cites “timing” as the reason for A Mary Christmas coming out now–meaning it was something she had always wanted to do but had not moved on until Foster broached the subject. But performances as intimate as these are a reflection of a different kind of timing relating to her maturation–and not only as an artist. A Mary Christmas—that her name, not Merry, is in the title is quite revealing—is about an artist finding and expressing some part of her humanity in the songs’ sentiments. She says she wanted to “put some love and joy in the universe, which is, you know, what we need.” Whatever issues she may be tackling offstage, it sounds like she’s tapped into a rich well of love and joy within her to a degree she never could before. Thus the “timing” of which she speaks. Indeed, it’s a Mary Christmas, and it’s every bit as personal as the title suggests. 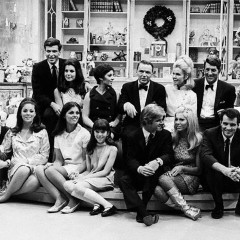