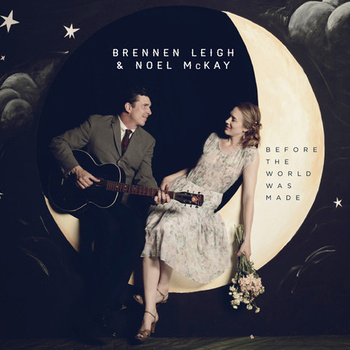 BEFORE THE WORLD WAS MADE

In a world festering with male-female duos, Austin’s Brennen Leigh & Noel McKay have some clear advantages over the competition. For starters, their dress is a bit retro (on the cover, a clean-cut Mad Men look for him; Jazz Age for her) but at least they don’t appear to have stepped out of a Civil War daguerreotype. Really, at a time when China’s kicking our ass, we have way too many of these types running around pretending to be something they’re not. (As a corollary to this, be advised that the statute of limitations is up for Brooklyn’s faux hillbillies—they crossed the line when guys started pasting fake Elvis ‘70s sideburns to their jaws, or, for those few able to do so, actually grew Elvis ‘70s-style sideburns.) For another, they’re a real committed couple, which is not so remarkable in and of itself, but as such they exhibit a winning sense of humor about their status, if you will. Lord knows even the best of relationships can be fraught with tensions of various sorts relating to bedroom, financial, family and/or other issues. Rather than glossing over this reality with sweet nothings, they play with it and tackle it head on. Case in point: a bopping little ditty they wrote called “Breaking Up is Easy,” a crisp shuffle in which they acknowledge their mutual attraction upon meeting but, as McKay notes in his dry tenor, “yeah, but what looks good on the outside, mama, sooner or later gonna make you wanna pack it up and move it on down the line.”  With producer Gurf Morlix’s steel singing sweetly behind them, the duo goes on to note the ease with which each of them could play the field and leave each other’s hearts “ragged and scarred,”  because “breaking up is easy, staying together is hard”—in only a verse and a chorus they acknowledge everything from the fear to the challenge of commitment, and then go on to explain bluntly why the grass isn’t greener on the other side, no matter their own differences. Theirs is a refreshing kind of frankness in this crowded field, and it infuses the most personal material they offer on Before the World was Made.

As the description of “Breaking Up is Easy” suggests, Leigh & McKay not only do not look like they stepped out of a Civil War daguerreotype, they don’t sound like they just stepped through a time warp that brought them from an Appalachian Mountains holler in the 1930s into 2013. With Gurf Morlix producing and playing multiple instruments, and surrounded by a band featuring Lisa Pankratz on drums, Brad Fordham on upright and electric bass with cameos by fiddler Beth Chrisman and pianist T Jarrod Bonta (in addition to Leigh’s guitars and mandolin and McKay’s guitars and ukulele), the duo is deeply embedded in an ambiance harkening to late ’50s-’60s mainstream country (they might even edge into the early ‘70s)—polished enough for radio at the time but with a smidgen of the live rawness (especially in the bright vocals far forward in the mix) of a home recording. If any other duo so convincingly evokes this era, I haven’t heard them. Morlix has described them as being akin to “modern day country duets a la George Jones and Melba Montgomery, but with very sophisticated songwriting,” and that’s fair enough. What you also hear in their performances is the depth of their attraction to each other, as friends as much as lovers, much in the way Johnny Cash’s choice of duet partners was rooted in his bond of friendship with them as much as or more than in any commercial consideration of the collaboration’s efficacy.

So they proceed to toy with the notion of what to do if and when the fire starts to die. “Breaking Up is Easy” is but the first salvo in this attack. It’s followed by a Louvins-style ballad titled “Breaking Up and Making Up Again” that begins, “Let’s try breaking up and making up again/maybe that’ll save us from the trouble that we’re in/it’ll be like we just me, not tired of each other yet/let’s try breaking up and making up again…” Then they propose to run off with other paramours so that “we’ll get jealous and go crazy,” which triggers a heated dialogue, to wit: Noel: “Well you get mad—“ Brennen: “I’ll change the locks!” Noel: “I’ll show up drunk—“ Brennen: “I’ll call the cops!” At which point their voices meld sweetly on the sentiment, “And then we’ll spend the whole night making babies.” On “Let’s Go Lubbock on Vacation,” they ponder getting away to California beaches, a mountaintop in Switzerland or “some far away exotic destination,” but confess to Lubbock, Texas (Buddy Holly’s home town, in case anyone doesn’t know, as well as Joe Ely’s) as the most desirable of all options because “then we’ll know we’re really in love.” Over a sweet southwestern background, spiced by a Beth Christman’s plaintive fiddle solos, they consider the pros and cons of Lubbock (“a place to visit, not to be,” McKay sings) before deciding to proceed on to Lubbock and, presumably, true happiness.

(Asked about the origins of “Let’s Go to Lubbick on Vacation” in an interview with Brian T. Atkinson at CMT Edge, Noel answered: “That was Brennen’s idea for a song: ‘We need to write a song called ‘Let’s Go to Lubbock on Vacation.’’ I said, ‘OK. That sounds pretty cool.’ I lived in Lubbock. I was sort of raised there and in the Hill Country [of Texas]. One thing about Lubbockites is they’re self-deprecating about Lubbock as a town. They’re always half putting it down with a wink and a nudge. It’s a cool town where lots and lots of famous creative people have come from. It is cool, but it’s also way in the middle of nowhere and it’s flat and it’s not that interesting of a place, too.” To which Leigh adds, with a laugh: “We just imagined two people going there to really prove that they liked each other.”)

In addition to sharing a common theme, the duo’s original songs on Before the World was Made share something else: the music advancing their vocals is invariably sweet and lighthearted, spare and evocative (it’s one of the estimable Morlix’s finest, most nuanced productions, in fact) that never sounds like less than a natural fit with the lyrics, with Leigh’s twangy drawl and with McKay’s plainspoken style. The playful electric guitar lines on “Before We Came to Our Senses” (“let’s hurry up and run away before we come to our senses”) lend it an irresistible music box flair; on “Let’s Don’t Get Married” (in which the couple do utter soft, sweet nothings about having found the perfect partner, a development that leads them to croon, “Let’s don’t get married, let’s stay in love”—so it goes in this world), Morlix’s tender steel lines and a taste of twangy guitar provide the sweetest underpinning for this oddest but most sincere of love songs; on “Be My Ball and Chain,” in which coupling up is posited as a purely utilitarian move (McKay: “I need somebody who can cook my supper/won’t you be my ball and chain.” Leigh: “And to fix up my ol’ fixer upper/won’t you be my ball and chain.” McKay: “And I need somebody who can clean my kitchen/won’t you be my ball and chain.” Leigh: “And to change the clutch on my ol’ transmission/won’t you be my ball and chain.”), which makes the confession “I’m so tired of being lonely” in the chorus more than a little suspect. But all this rolls out over in lighthearted fashion over a lively two-step punctuated by that frolicsome twangy guitar, and if you don’t get the joke you’re probably taking the whole album the wrong way.

Lest anyone be misled, though, Leigh and McKay do have a serious side—check that: these are all serious songs, but a few evince a more sensitive and serious side than some and are, in fact, beautifully done and doubly affecting: the tender ballad “Soft Guitars” is a love song set under a big sky in the open plains with the two lovers falling comfortably into each other’s arms at the end of “a long, hard summer day,” with subtle percussion sounding like a heartbeat throughout and the steel’s subtle swoops and cries heightening the romantic glow the lyrics describe. In a reunion after a long time apart, the setting of “Salty Kisses in the Sand” is, apparently, the Hawaiian Islands, based on the familiar, heart tugging strains of the steel guitar and the lilting melody, as Leigh and McKay harmonize sweetly about frolicking alone on the beach and marvel at “how perfectly my hand fits in your hand,” in what is in, in all its simplicity, the couple’s most moving declaration of their affection for each other. Whereas “Salty Kisses in the Sand” is about reunion, the touching “Please Reconsider,” with its Spanish guitar, evocative piano triplets and urgent, soaring harmonies, is focused on reconciliation, a plea for one partner to “come back home” to the other, with no joking about breaking up and making up again, only heartfelt confessions of the pain of being alone and confusion over love having fled.

Though both have solo careers to cultivate, Leigh and McKay have indicated their musical partnership is not a one-and-done proposition. “This is a nice thing that we can keep on doing,” McKay told CMT Edge. Yes, a nice thing it is, and it would be nice to hear more from them, because theirs is something special in the duet realm. Enough with all the pretenders. 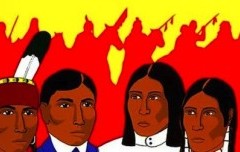 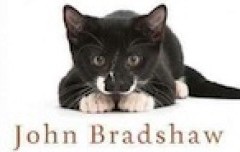 John Bradshaw Knows What Makes Our Cats Tick (And Purr, For That Matter)