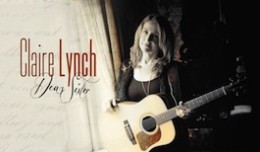 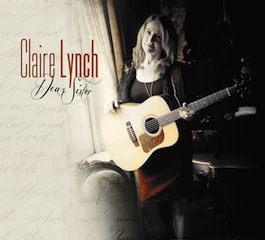 Think not of them, thou hast thy music too.–

So wondered John Keats when he wrote the final section of his now-celebrated poem “To Autumn” on September 19, 1819. Although Claire Lynch’s exceptional Compass label debut, Dear Sister, was released at the end of May, at the height of Spring, it has the reflective, contemplative feel of an autumnal missive. Desire and despair are on seemingly equal footing here, and in Lynch’s plaintive mountain tones melancholy and contentment are kissin’ cousins.

Attribute this mood to Lynch herself. With this particular batch of originals and covers, her legendary vocal restraint is the perfect tack for keeping listeners off-balance and engaged as they try to ascertain exactly how deep the hurt is in “Once the Teardrops Start to Fall,” in which she’s struggling with strong feelings for an ex- even as friends counsel her to move on, but the funky arrangement (keyed by Rob Ickes’ bluesy swoops on resonator guitar, Mark Schatz’s bluesy bass and Bryan McDowell’s swaggering fiddling) seems unusually lighthearted, given the situation. Such is the duality in play pretty much throughout the entire album. Lynch is always in control–even when she struts through the Osborne classic alcohol-soaked heartbreaker, “I’ll Be Alright Tomorrow” (which features wonderful solos by McDowell on fiddle, Compass owner Alison Brown on banjo, presumably Matt Wingate on mandolin plus a feisty bit of punctuation by bassist Schatz), she sounds like she’s not quite sure of herself when she sings “I may be a little bit tight tonight/but I’ll be alright tomorrow/‘cause my baby’s comin’ home…”–enough to make you wonder if she’s really all that thrilled by this prospect and, indeed, if he’s really all that.

‘Once the Teardrops Starts to Fall’: Claire Lynch at Music City Roots, live from the Loveless Café in Nashville, July 24, 2013

By now careful readers may have noted that Ms. Lynch is not only surrounded by her ace band–Schatz, McDowell, Wingate (also on guitar)–but with some guests who make their mark when they enter. We’ve already noted Ms. Brown’s standout turn on “I’ll Be Alright Tomorrow”; the estimable Tim O’Brien shows up with a forceful harmony vocal and feathery soloing on bouzouki on the mesmerizing “Doin’ Time,” a song with a hard driving launch and the closest Ms. Lynch comes to expressing out-and-out anger at a feckless lover as she sets out on the road leading her away from the scene of her heartbreak; it’s tense and heated, for about half of the tune’s 4:37 running time; and then, suddenly, a calm settles over the track as the band, with O’Brien, goes into a sensitive, impressionistic solo section for some 30 seconds before McDowell charges ahead with a fiddle solo that bobs and weaves for a few bars ahead of a more subdued Ms. Lynch returns. Gradually she regroups and becomes more assertive as O’Brien joins her in harmony. At the end, when she repeats the mantra, “If the road is my sentence, I’m doin’ time,” she does so not with the brio she trumpeted it with earlier but with a palpable sense of resignation–the old duality at work again. On the stone-country tearjerker “Everybody Knows I’ve Been Cryin’,” which is only one of the best country songs of recent years (if country were still really country in the classic sense), Ms. Lynch dispenses with the nuance and lets her heart ache openly in a virtuoso vocal performance aided by emotional harmony support from her bandmates, a keening fiddle solo by McDowell and the atmospheric, pedal steel-like flourishes of Mike Johnson’s Pedabro (an exceedingly rare instrument that is, according to the Steel Guitar Forum, a pedal steel with a dobro resonator cone assembly; it was developed by the great pedal steel master Paul Franklin, only 25 were ever built, it is tuned to D9, is difficult to mic–making it useful only as a studio instrument–and made its debut on record when Franklin used it on Keith Whitley’s classic “When You Say Nothing At All”).

The album’s showcase song, sequenced at the midpoint of the tunestack, is a collaboration between Ms. Lynch and Louisa Branscomb, one of our age’s formidable songwriters. “Dear Sister,” the song in question, is soft, tender and emotionally riveting, with a beautiful, subtly rendered vocal by Ms. Lynch, whose deep understanding of the lyrics’ emotional landscape is nothing short of breathtaking. Its text comes from letters written by four brothers fighting for the South during the Civil War and sent home to their sister, who saved them. The sister happens to be Ms. Branscomb’s great-great-great aunt, who stowed the letters in a trunk, where they were discovered a century later. Ms. Branscomb’s brother edited them into a book titled Dear Sister, which was potent enough, but the song of the same title is something else again. It begins, “This could be my last letter/I may never see the cotton fields of home…again”–the pause before she whispers “again” is so deadly powerful but the gut punch it delivers becomes a flurry when the verse continues: “I will miss you dear sister/tonight I never felt so all alone/and the fog was so thick, that the Stones River stars could scarcely invade the tent and the dark/and all I that I could see when I closed my eyes to dream was home…sweet home,” and she makes of that last, soft “sweet home” a moment so weighted with anguish and sorrow it will lay you low. Wingate is adding the most tender and spare mandolin support to Ms. Lynch’s masterful performance, and McDowell slips in with an understated fiddle part that seems designed to underscore the lyrics’ chilling fatalism.

Claire Lynch and band, the title track from Dear Sister with Claire’s explanation of the song’s source. Live at the Earlville Opera House, Earlville, NY, October 5, 2013. Posted at YouTube by Joe Mossbackfan.

Going out on an upbeat note, Ms. Lynch–accompanied by Schatz’s hambone percussion and clogging (yes, clogging–who knew?), with the fiddle and mandolin gradually making their appearance in jolly fashion–offers a loving memory of a beau she loved on “Buttermilk Road,” the type of fellow who “held me through the night.”  At the end, she’s in New York City, on Bleecker Street, heading to “another show,” but the “sage and smoke” on her coat amount to an evocative sense memory of where she came from. At which point the band breaks into a spirited, hard driving bluegrass jam (titled “The Arbours”), a moment of pure adrenalized exhilaration erupting after an often trying journey through a scarred interior landscape. It’s almost as if the songs of Spring begin right here. Ms. Lynch, you have your mission.