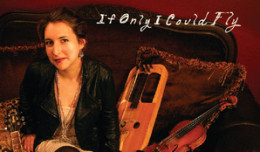 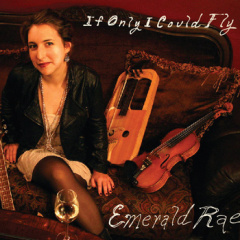 IF ONLY I COULD FLY
Emerald Rae
www.emeraldrae.com

Born in the legendary seaport of Gloucester, MA; educated in fiddling in Scotland and at Berklee; experienced professionally as a member of the female fiddling quartet Annalivia, Emerald Rae boasted a stellar rep as a musician long before If Only I Could Fly was released, at least dating back to her 2005 debut, Contemplaytion. With this album she becomes a player as a singer-songwriter who ably complements herself on guitar, fiddle and crwth (“krooth,” an ancient medieval Welsh fiddle she has mastered). As a vocalist she sounds uncannily at times like the wonderful, woefully overlooked former Duhks vocalist Sarah Dugas, at least when she opens up and takes glorious flight; but she also has a sexy, whispering tone for more intimate moments that draws you into her confidence and then gets under your skin. As a writer she deals primarily with matter of the heart and, sometimes currently, with a search for identity. Consider, for instance, the title track, the album opener. On the surface and at first blush it impresses as a longing missive to a significant other she’s desperate to get close to again, “if only I could fly.” As it develops, though, she seems to be talking to herself as much as to anyone else: “you start to think your whole life has been wasted/if you broke a dream or two, still chased it/if you watched the clock the time recedes/and your good becomes a disease.” At the end she cries, “If only I could fly! If only I could fly! If only I could fly!” as she bows intense, even angry sounding phrases on the fiddle and add a little extra texture and tension with the brittle punctuations emanating from the crwth. “If I Could Fly” is bookended and countered by the closing cut, “The Way That I Am Now,” a diary-like ballad, with her vocal close-miked, that illustrates how far she’s traveled since the album and suggests how much further she has to go—right from the start, in fact, when she opens with “I wish that we could start all over/turn everything around/now I’m older and wiser/you may not like me the way that I am now,” and then continues working variations on this theme, all the while asserting how she is now in a voice that is assuredly assertive but a telling smidgen of insecurity. It hits with a certain harsh impact at the beginning when she backs her vocal with a guitar insistently and hard strummed and keeps it that way until almost the midway point, when she adds a lovely and poignant fiddle solo rife with both the beauty and the brittleness that mark the Cape Breton style she knows so well.

AUDIO CLIP: Emerald Rae, ‘The Way That I Am Now,’ from If Only I Could Fly

In between these two tunes Ms. Rae’s journey proceeds in fits and starts, emotionally, that is, wending its way across dry plains of heartbreak to wind up in verdant fields of resigned acceptance of her fate. Well, maybe not so verdant, but more fertile than those she tills early on in her stewardship of the heart land.

In “Sweet Arrest” she beseeches the man who’s dumping her to “go get your gun/aim for my chest/aim for the emptiness where my heart used to rest,” and later diplomatically assures him, “I’ll give you a chance to settle the score.” She sings all this in a whispery, wounded voice but one also even-keeled, and to that end a bit chilling in the indignation informing her resignation, a mindset her jittery, driving guitar accompaniment underscores in this straightforward exercise in self-immolation. A more florid cry of the heart directed at another feckless lover comes by way of “Go Dig My Grave,” a telling title if ever there was one. Here Ms. Rae deploys guitar, fiddle and voice as a single harrowing voice bemoaning and howling in evoking the depth of her loss. Her personal devastation is no less in “Truly Understand” than it is in, say, “Sweet Arrest,” and it again finds her looking for an exit (“Wish to the Lord I’d never been born/died when I was young/I never would have seen your two brown eyes/or heard your flattering tongue…”) but with a distinct difference: the lyrics are not hers but drawn from traditional sources (including the Carter Family) and instead of being infused with their original melancholy, Ms. Rae, now two songs from the end of the album, seems not resigned but almost happily freed from the bonds of lovelorn misery; her voice is bright, chirpy even, and her guitar accompaniment is similarly jaunty. Fittingly, “Moon Dance,” the album’s penultimate tune, immediately following “Truly Understand,” is a celebratory fiddle solo of buoyant emotions and richly colored textures in her delirious mix of long- and short-bowed phrasings that dance gaily around the track, and seem for all the world like the sound of a heart at last unchained and set free—an impression reinforced by the aforementioned album closer, “The Way That I Am Now,” in which the focus again returns to her search for redefinition as a woman who will not allow a significant other to co-opt her sense of self. The intimacy of the confessions herein is enhanced by Ms. Rae’s direct, unadorned self-production—she sounds like she’s sitting in your living room spilling all her secrets—and in the end all the elements mesh into a seamless, moving epic. And lo, Ms. Rae does fly. 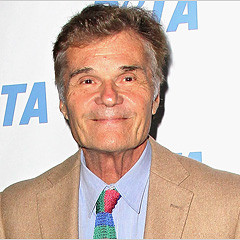 Best In Show: Fred Willard In Anything, Including Animal Welfare