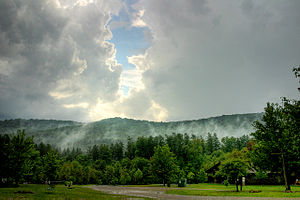 Note: Known as “the wilderness playground of western New York,” Allegany State Park is divided into two sections: the Red House area and the Quaker Run area, the former in the park’s northern half, the latter in the southern half. Apart from these distinctions, Allegany is one of America’s natural wonders, a please of breathtaking beauty and serenity. Kimberly Daniels learned this first-hand in her youth, when she got lost in the park. Instead of being frightened out of her wits, though, the young Ms. Daniels, but a lass at the time, found unexpected comfort in the natural world.

At first I found myself in a hollow of discontent, but it transformed into a canopy of protection soon after. I found myself in the woods in Allegheny, knowing only the comfort of being shrouded by massive trees. I can remember seeing maples and willows with their leaves shaking in the wind. I was aware of what they were only because they reminded me of the trees in my back yard at home. Although I was merely seven years old, I remember the feeling of isolation that overcame me when I got separated from my family. On that day, I was left alone to commune with nature and to find solace in that which surrounded me.

Being so young, my first instinct was to cry and become frightened when the realization hit me that I had gotten separated from our small party. I was reminded of fairy tale stories such as Red Riding Hood that warned that little girls who found themselves alone in the woods could fall prey to wicked, lurking wolves. This experience of being lost normally thought of as traumatic was such for me for only a short time; until I began focusing on my surroundings and somehow halted my tears. I suspect now that this ability could have been a result of the fatigue of a restless child’s mind.

Shortly, I became aware of the peacefulness of this grove; and the shroud of trees gave me a sense of being secure, almost as if the trees bent down around me protectively. Their height reminded me of my caregivers with their branches outstretched like loved ones’ embracing arms. The minuscule flowers on the forest floor were like my classmates that would call out to me to play hide and seek or tag with them. The feeling of isolation had vanished as a result of my childhood imagination and I was consoled when I regarded the trees and flowers as old friends and loved ones.

An April weekend in Allegany State Park. Posted at YouTube by LickinBranchOutdoors.

I can still recall the hues of the flowers. I remember splashes of blue and purple, almost painting the ground around the trees in small flecks like floors that become spotted after walls in a home have been painted. I remember being inspired even at this age to make a crayon drawing of what I saw. Always the enthusiast for the arts, I longed to run back to camp and find some sheets of paper and possibly my chubby Crayola  markers until I recalled that I had not a clue where our cabin was.

Looking around, I could catch a glimpse of a hopping rabbit periodically and I could hear the continuous droning of crickets as well as chirps coming from birds concealed in the treetops. I watched mosquitoes float though the air around me, seeming to welcome me to dance with them rather than buzzing around my head in their typically frustrating fashion. Everything seemed to move in harmony as I felt myself part of the magic that is nature. I believe that this experience inspired the feeling of awe I still find myself feeling when looking into a pond or a forest, or even in some instances when I can feel the same just walking across my college campus and noticing a sunset or the beauty of the moon’s astonishing and eerie glow high in the sky above.

This is why to this day; getting lost in the woods of Allegany State Park remains one of my favorite memories of nature even though to experience it I had to first become frightened and wish that my mother would rescue me from the startling forest. The magnitude of the feelings of solitude, however, were no match for my feelings of communal harmony when I became like a “wild thing” in the woods. Instead of fearing the wolf, I almost suspected to be taken as one of their own and raised by them. I also expected that any creature I would find would be breathing in time with me, as if we had become one. At this point of succor, I almost didn’t miss my family at all. I had no recollection of being lost or scared or alone. I had all the friends and caregivers I needed right there in the woods and they would be around to provide protection for me and to entertain my young mind for as long as I wished. Still to this day, I never feel isolated, out of place, or alone when venturing out into nature.

When I was eventually found by my mother with no tears in my eyes, she was curious as to how I had kept calm without her or my grandmother there with me. Only when I started giving her a rambling list of all the things in the woods I saw and I showed my delight in observing nature did she realize why I had not been afraid. I believe she noted that the maples and willows would remind me of home and that such things as pretty flowers or bunny rabbits would delight a little girl. But to this day, I can’t be sure she understood just what I experienced that day when I was left alone with the natural world at such a young age. It was an experience that would shape my view of nature and nature study for the entirety of my life. 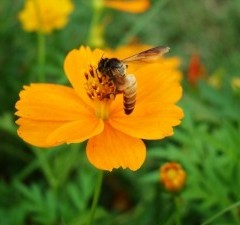