Written by Daniel B. Ullman (adapted from his play)

A 1953 U.S. Cinecolor western film released by Allied Artists Pictures, directed by Ray Nazarro and starring Sterling Hayden and Eve Miller, Kansas Pacific offers a fictionalized account of the struggle to build the Kansas Pacific Railway in the 1860s just prior to the American Civil War. In the movie the building of the railroad in Kansas is opposed by Confederate sympathizers.

General Winfield Scott sends a Corps of Engineers captain (Hayden) incognito to complete the railroad in order to supply western outposts when the anticipated war starts. Opposing the railway is Confederate William Quantrill (Reed Hadley), whose mission is to stop or delay the railway from being completed. As the tracks push westward, Nelson must contend with increasingly violent sabotage, while trying to romance the foreman’s pretty daughter Barbara (Eve Miller)

The movie was filmed at the Iverson Movie Ranch and the Sierra Railroad in what is now Railtown 1897 State Historic Park, Jamestown, California. Walter Mirisch of Allied Artists had Walter Wanger’s name put on the picture as a producer, although Wanger was in prison for shooting agent Jennings Lang, whom he believed to be having an affair with his wife, Joan Bennett. Thanks to Mirisch, Wanger received a producer’s billing, salary and profit participation.

The cast includes Clayton Moore as Henchman Stone. At the time of this film’s release, Moore was in his fourth season starring as TV’s The Lone Ranger (actually, Moore’s third season–owing to a contract dispute, he sat out the 1952 season and was replaced as the title character by John Hart). The Iverson Movie Ranch, where Kansas Pacific was filmed, was also the location for The Lone Ranger episodes.

Lulu goes to a department store to exchange her doll for something else. While looking for a new item Lulu manages to terrorize the section manager, ski down the escalators, and cause a Noahic flood in the store. 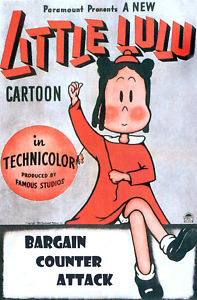 Artist of the Violin: Chatting Up Brooke Alford